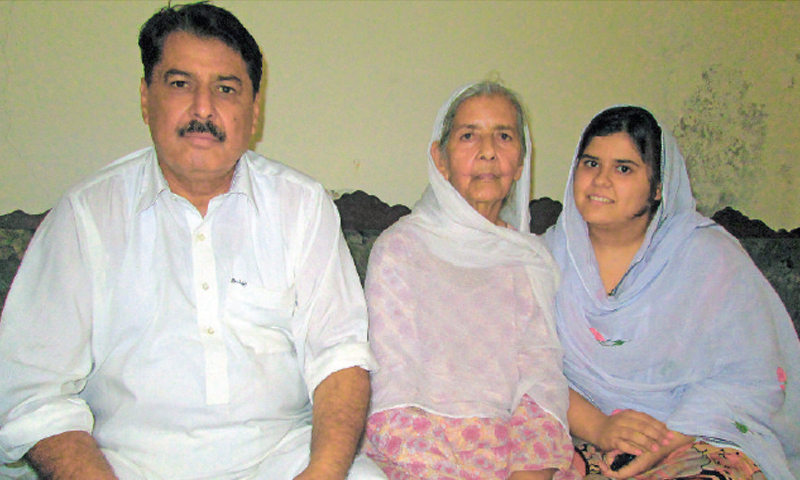 CHAKWAL: “When I first went to a local college two years ago, students and teachers gave me a strange look,” recalls 18-year-old Manisha Chhiber, a Hindu girl whose family lives a secluded life in Kariyala village located at the top of Surla Hill, some 10km away to the south of Chakwal city.

Manisha’s family is one of the only two Hindu families living in Chakwal district (the other lives in Kot Chaudhrian village located some 40km to the west of Chakwal).

“They gave me a bizarre glance because being a Hindu I was an alien to them and such a situation always hurts me but I don’t express my feeling,” Manisha continues.

But in village Kariyala she and six other members of her family live peacefully and do not feel isolated.

Manisha now waits for her BCom result and wants to become an officer by passing the Central Superior Services (CSS) exam.

“Although we have mixed up with Muslim villagers in such a way that we do not feel alienated, sometimes feeling of loneliness haunts us,” says Manisha’s father Ravindar Kumar, the head of the family.

The family of Ravindar Kumar belongs to Chhiber clan which is one of the seven lineages of Mohyal Brahmins. Ravindar’s clan has a tumultuous history replete with sufferings and bravery.

It was Baba Paraga Das, a Chhiber who laid the foundation of the sleepy village Kariyala in the 16th century and the village remained the hub of Chhibers till partition uprooted them.

As Mohyals were greatly influenced by the preaching of Sikh Gurus, they played an active role during the formative years of Sikh religion.

Many notables of Mohyal Brahmin caste remained the disciples of Sikh Gurus and they still worship Sikhism along with Hinduism.

The Aurangzeb rule was a bit hard for those Mohyals who devoted themselves to Sikh Gurus. The three revered martyrs of Sikhism Bhai Mati Das and his two brothers Bhai Sati Das and Bhai Dyal Das who were killed by Aurangzeb were also Chhibers and belonged to Kariyala village.

The three brothers were the disciples of Guru Tegh Bahadur, the ninth Guru of Sikh religion.

Their sole crime was that they supported the newly emerging Sikhism and refused to embrace Islam. The three brothers were bestowed the title of ‘Bhai’ and Sikhs revered them.

Later, all the Chhiber men in Kariyala village added the word ‘Bhai’ to their original name.

Ravindar Kumar’s father Bhai Jaggat Singh (who was given a Sikh name due to the family’s devotion to Sikhism) was not only a landlord but also a Zaildar (an officer in-charge of a Zail, an administrative unit comprising 40 villages) during British Raj.

One could imagine how one can migrate to an alien land by relinquishing such a great social position leaving a vast agriculture land behind.

Jaggat Singh never wished to migrate but when his uncle Bhai Daleep Singh was assassinated by Muslim rioters, he surrendered to other family members and set out for Delhi.

“Life in Delhi refugee camp was painful for such a man who lived a luxurious life. This forced my father to come back,” tells Ravindar Kumar. But Jaggat’s two sons and wife refused to accompany him, he said adding that he had to return alone.

After returning from India, Jaggat resettled in Kariyala and contracted a second marriage. Although he managed to preserve his land, the high social position which he used to hold before partition was lost forever. He had two sons from his second marriage – Ravindar Kumar and Surindar Kumar.

Living in a thickly Muslim populated society, Ravindar Kumar and his family members observe Muslim, Hindu and Sikh festivals. “On the occasion of Eid, I decorate my hands with henna as my Muslim friends do. I visit homes of my Muslim friends and they too visit my home.

On the occasion of Diwali, my Muslim friends join me in the celebration,” says Manisha, but she adds hastily: “Had I been able to celebrate Diwali with my community, it would have been a different feeling.”

Being a sole Hindu family in the village, they do not celebrate Holi. Ravindar also mixes up with Muslim on their rituals.

“Whenever, any of my Muslim friends dies, I go to offer his/her funeral prayer,” Ravindar says.

“The old people of the village treat us in a normal and friendly way but the migrants and the youth’s behaviour is always skeptical towards us,” Manisha explains.

Being a hub of Hindus, Kariyala had a number of Hindu temples but many of them were damaged in riots. The state of two surviving temples was deplorable till Musharraf’s regime.

The local bodies system came as a blessing for Ravindar who was elected as member of the district council on a reserved seat for minorities. He managed to get some funds for the renovation of one of the temples where now he and his family members worship.

But if one wants to visit the temple, he\she is greeted by buffaloes tied in front of the temple. The buffaloes are owned by a Muslim family who lives next to the temple.

“I requested them many a times to find some other place for their animals but they did not pay any attention. I could not do nothing but plead,” says a distressed Ravindar.

The other abandoned temple has been rented out to another Muslim family by Evacuee Trust Property Board and this temple has become a goat pen.

“Humanity should not be slaughtered at the altar of religion and we should take care of each other’s feelings,” says Manisha.

“It is very painful to bear the desecration of our temples but we prefer silence,” says Ravindar.