Home  »  Newspaper Articles   »   Former US ambassador to Iraq says: It’s not Washington’s job to tell Iraq who its leaders should be 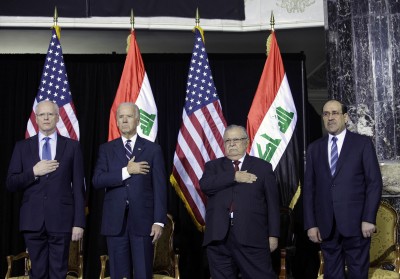 James F. Jeffrey has served as U.S. ambassador to Iraq, Turkey and Albania. He is the Philip Solondz visiting fellow at the Washington Institute for Near East Policy.

As the U.S. ambassador to Iraq from 2010 to 2012, I dealt extensively with Prime Minister Nouri al-Maliki. And now, like many others, I am deeply skeptical about his ability to lead the country. But I have several points of contention with the July 6 essay on Maliki by my former colleague Ali Khedery in Outlook (“Why we stuck with Maliki and lost Iraq”), not least of which is the title the editors selected for it.

First, Khedery’s account of Maliki’s selection as prime minister in 2010 does not track fully with my recollection. No party or coalition “won” the March 2010 vote. A largely Sunni coalition led by a secular Shiite Arab, Ayad Allawi, finished first with 91 out of the 325 parliamentary seats, while Maliki’s coalition won just two fewer. However, before the parliament convened, Maliki’s coalition allied with the other major Shiite group, thus controlling about 150 seats.

The Constitutional Court, as Khedery notes, decided that this new alliance, not Allawi’s coalition, would have the right to try first to form a government. Was the court influenced by Maliki, as Khedery suggests? Probably. But the relevant constitutional language, while vague (referring to the “bloc with the largest number”), can certainly support the court’s finding.

Second, many U.S. officials, up to the highest levels, had concerns about Maliki, myself included. Therefore, on arriving in my post in August 2010, I used our limited influence to delay the formation of the new government and examine alternatives. I brought Khedery back to Baghdad and ensured that his views were shared throughout our government. But it was soon clear that the Shiite religious parties and the Kurdish coalition — almost 70 percent of the Iraqi parliament — agreed that the prime minister must come from the Shiite religious coalition, certainly not from one supported by their former joint foe, the Wahabis. Maliki thus had the upper hand.

We explored alternative candidates, including Adel Abdul Mahdi, for whom Khedery expresses a preference, but the numbers never added up, just as the notion of Allawi as president collided with Kurdish preferences. Finally, in November 2010, with no alternative left, the courts demanding that a government be formed and the Kurds negotiating separately with Maliki, he was able to form a government.

My disagreement with Khedery runs deeper than just factual details, however. While I pulled my hair out constantly with Maliki after 2010, Allawi was often even more obstructionist, and the Kurds pursued their own agenda frequently. The problem was less any one politician and more that Iraq is thin soil for a full-bodied constitutional democracy. But the remedy is not to use our soldiers to dictate constitutional and parliamentary outcomes, thus challenging the very constitutional order we fought so hard to establish. That was not our military’s mandate in the 2008 security agreement with Iraq, and the idea runs counter to the views of majorities of Americans and Iraqis. The term for all that is not “nation-building” but “imperialism,” which sees nations and populations as pawns to be “won” or “lost.”