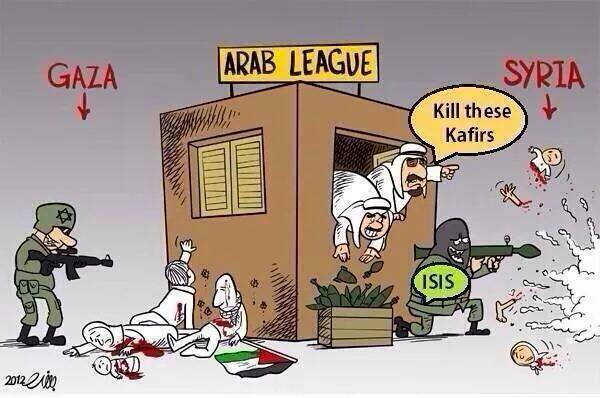 In 1871 in the small north Indian town of Bareilly Richard Bourke, the Governor General and 6th Earl of Mayo, made a speech in the presence of the Nawab of Rampur and other notables. This came in the aftermath of Hindu-Muslim ‘communal’ riots because of a dispute about public processions because Muharram and Ramnavami had fallen on the same day. Apart from the usual platitudes about just and fair British governance that recognised and rewarded ‘loyal’ subjects, the governor ended his speech with a warning. Should the loyal subjects do anything contrary to the directions of the British government, not only would the guilty party be prosecuted but ‘the party’ they belonged to would also suffer the consequences.

Today nearly 140 years later a similar policy is being enacted in a corner of the world that was also once a part of the British Empire. Ostensibly, the current assault on Gaza is the result of the kidnapping and murder of three young Israelis though a closer analysis illustrates that this is less to do with any threat posed by Gaza and more do with Israel’s political fears both domestically and internationally. Indeed, despite Netanyahu’s claim that Hamas is to blame a little known outfit called the Islamic State in Jerusalem has claimed responsibility for the kidnappings and has said that they acknowledge Abu Bakr al-Baghdadi as their leader.

The first important point to underscore is that much like the loyal subjects threatened by the governor-general all those years ago, Israel too has been threatening Fatah- sometimes blamed for being ‘loyal subjects’- because they reached an agreement of mutual cooperation with Hamas. Earlier this year the accord to build a Palestinian national unity government was reached between the two factions and was sealed with the much-publicized handshake between Musa Abu Marzooq of Hamas and Azzam Al-Ahmad of Fatah. Many Israeli political leaders claimed that Fatah had tricked them ahead of the peace talks and that it was now impossible for the Israelis to speak to either faction because they deemed Hamas to be a terrorist organisation. So perhaps part of the current asymmetric assault on Gaza is to do with the Israeli desire to punish Fatah and assert control over Palestinian domestic politics. Israeli Ambassador to the UN also stated as much at the end of a speech to the Security Council on the 10th of July.

The second equally important point is to do with the rapidly changing geo-strategic contours of the Middle East. With the rise of the Islamic State of Iraq and the Shaam  (ISIS) in Iraq and the potential entente between America and Iran to fight this ‘common’ enemy, Israel fears that increased cooperation between these two countries could be at the cost of Israeli-American relations. Interestingly, in a recent statement the terrorist group ISIS has declared that its first goal is to fight ‘the near enemy’ and that Jerusalem is of secondary importance. The ‘near enemy’ are the Shi‘a and those Sunnis who refuse to acquiesce to al-Baghdadi’s suzerainty.

Particular vitriol is reserved for the ostensibly pro-Iranian Shi‘a government in Baghdad who by extension are also regarded as a threat by Israel. Of course the fact that many Iraqi Shi‘a factions distance themselves from Iran is something that is lost in most analyses. Iran in particular is top of both ISIS’s and Israel’s list and so even if it is not a case of an enemy’s enemy, the fact is that any rapprochement between America and Iran is a cause for consternation not only in Israel but also in various countries of the Arabian Peninsula. Israel also blames Iran for supporting Hamas but in recent years the Qataris have been much more forthcoming and even tried to pay Hamas salaries though the Arab Bank, already being investigated by the US, rejected the transaction. Not withstanding the threat posed by ISIS, the British government’s decision to perhaps open a high commission in Tehran and the energy politics of the region, the other important factor in all this are the nuclear talks between America and Iran.

It is perhaps not a coincidence that these talks are at a particularly crucial stage and that over the next few days, the US secretary of state John Kerry, the Iranian foreign minister Javad Zarif and other members of the six-power group will convene in Vienna to decide on how to thrash out an agreement. The extension granted to Iran last year and the unexpected current entente, catalysed by the events in Iraq, is worrying for Israel, the region’s sole if undeclared nuclear power. With looming midterm elections in America it remains to be seen how much ground Obama is willing to concede in Vienna without helping the Republicans and pro-Israeli lobbies. However, what is clear is that the military action against Gaza is not just about retribution but more so is a message to America and the wider world about Israel’s military capabilities.

Of course, in this world of geo-strategy and power-relations ordinary people’s lives end up becoming meaningless statistics. As one of the world’s most powerful military forces demonstrates its might against the narrow and sandy 40 km long sardine tin can that is Gaza, it would be naïve to discount the wider circumstances and reasons behind  ‘Operation Protective Edge.’ The Palestinian poet Mahmoud Darwish wrote a wildly popular poem ‘Identity Card’ in which the first line of each verse begins with the exclamation “Sajjil ana arabi” or Record! I am an Arab. Perhaps now the line should read Sajjil ana insaan, Record! I am a human.