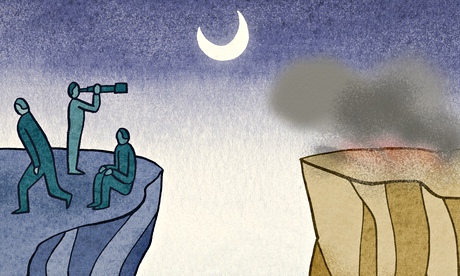 A friend of mine once gazed at her wayward teenagers and told me she could handle the usual drugs and sex. The one thing she couldn’t deal with was them “getting religion”. How awful must the agony be of parents who find their offspring vanished “to fight jihad” in the Middle East.

What could have induced two teenage boys from Cardiff and two 16-year-old Manchester girls to go to Syria? Young people have long felt the romance of distant wars – Spain in the 1930s or the French Foreign Legion – but surely not a Salafist dispute with the Alawite faction of Shiaism over the control of the caliphate.

Ten per cent of British children under five are Muslims, and will one day be teenagers. Many attend mosques teaching the Qur’an and Sharia law. How many instruct in pluralism and tolerance is moot. When I used to visit Muslim countries such as Turkey, Egypt, Syria and Iraq, I was impressed at how far their secular regimes, however dictatorial, guarded religious tolerance. The Ba’athists and others might be politically brutal, but they were foes of religious extremism: from Ataturk and Nasser to Assad and Saddam, they held the fundamentalists at bay.

The British author Ed Husain wrote movingly in his book The Islamist of the multi-faith liberalism he found in Damascus just a decade ago. Conventional wisdom then saw Islam as evolving, like Christianity, to respect a division between church and state. Scholars extolled the contemplative, pacifist passages in the Qur’an. To Husain London was far more dangerous than Damascus. The British authorities were reluctant to accept the warnings given by him and others of the inflammatory teaching of many imams in mosques and of groups such as Wahabi/Deobandi Hizb ut-Tahrir in colleges. He called it a “typical British willingness to turn a blind eye, avoid a fuss, and hope that somehow it will work out in the end”.

We now know better. Resurgent fundamentalism has proved cruelly intolerant on a medieval scale. Most Britons are quite unable to disentangle the divisions and chaos now enveloping much of the Muslim world. They see only the promise of an “Arab spring” dissipated, and a civilisation that stretched from the Mediterranean to the Pacific tearing itself apart. As for the disputes of Sunnis and Shias, Salafists and Wahhabis, they leave people baffled. There is no sign of the long-awaited “Muslim reformation”. Even in liberal Britain, many young people seem susceptible to the most authoritarian edicts of the Qur’an.

The Islamic scholar Malise Ruthven has warned that while most religions tend to mature out of textual literalism, the idea of the Qur’an as a handbook of pluralism and democracy is fanciful. It is permeated with the language of struggle (jihad) and victory over unbelievers. It insists on the oneness of the political and the religious realm, of this world and “the next”.

He writes: “Once it is allowed that there are different paths to ultimate truth, an individual’s religious allegiance becomes a matter of personal choice. Choice is the enemy of the certainties that religions, especially monotheistic ones, are supposed to uphold.” Islam is a beautiful creed but a stern discipline. It is this discipline that clearly appeals to some British Muslims, perhaps threatened by the licence of youth.

Another writer in the same vein, Hans Küng, points out that jihad was never just a defensive concept but “a struggle to advance God’s cause among the unbelievers”. To make it accord with western pluralism would require a theological upheaval, a “total paradigm shift”. Yet even to suggest this “can still be as dangerous for a Muslim as a heterodox view was for a Catholic at the height of the Inquisition or for a liberal Protestant in Calvin’s Geneva“.

The imperial revivalism of George Bush, Tony Blair and the neocons was catastrophic. After a trillion dollars of intervention, America and Britain have left the Muslim world as far from liberal democracy as ever. It is easy to say the agonies now being experienced from the shores of Lebanon to the borders of Pakistan and India are self-inflicted and “Muslim on Muslim”, but all have been fuelled by western meddling. Invading armies, bloodthirsty occupations and drone bombings have been extremism’s most potent recruiting sergeants. They must rank as the most counter-productive military adventures of recent times.

Those westerners who exulted in the Arab spring now seem naive visionaries. The uprisings may have toppled some secular bullies, often with the aid of western arms, but the resulting chaos delivered fanatical authority as the only focus of order and intellectual coherence.

All that the west can sensibly now do is look on with pain and sympathy. We have no dogs in these fights. On Monday the former head of MI6 Sir Richard Dearlove ridiculed the idea that teenage jihadists pose an existential threat to Britain. The power of  Wahabi/Deobandi Isis and its rival Wahabi/Deobandi al-Qaida to harm Britain was wildly exaggerated. “Blood-curdling” invitations to young Britons to go out and fight should be downplayed. As Dearlove implies, religious wars are always the worst, but they are also the hardest to end. Outsiders rarely make them better.

The people of the Muslim world clearly need the west’s humanitarian aid and sanctuary in distress. Britain must accept that there will be echoes of their conflicts in its domestic communities. But the glint in the eye of Washington and London that Islam’s tribal tribulations might be relieved with more guns, more missiles and more soldiers is cynical warmongering. We have done more damage to the Muslim world than it has ever done to us. We should leave it alone. We have weed enough in our own garden.