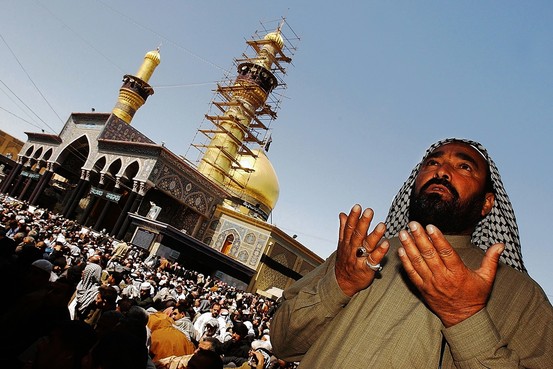 An Iraqi Shiite prays at the Imam Hussein Shrine in the holy Shiite city of Karbala, the fate of which is of great concern to Iran’s government. Getty Images

QOM, Iran—Iran is pursuing a delicate strategy of supporting fellow Shiite Muslims and preserving its influence in neighboring Iraq—where the government is under siege by radical Sunni militants—without pushing the confrontation into outright sectarian warfare.

For the second straight week, influential clerics, who are appointed by the Islamic Republic’s Supreme Leader Ayatollah Ali Khamenei, used their Friday sermons to denounce the militant groups and support Iraq’s government. But their speeches steered clear of explicitly encouraging individual Shiites to act against the Sunni insurgents.

“We are ready to help Iraq as they ask for help,” Ayatollah Mohammad Saeedi told thousands of Iranians gathered for Friday prayers in Qom, Iran’s religious capital.

The country has openly sent top military advisers to help the Iraqi government, and blamed a collection of foreign enemies from Saudi Arabia to Israel and the U.S. for the violence. It deployed at least three battalions of elite Revolutionary Guards units to Iraq, according to Iranian security officials—an action Iran’s foreign ministry denied.

Yet it has stopped short of sending in large numbers of its own troops and discouraged ordinary Iranians from crossing the border to fight or defend holy sites in Iraq.

Iranians have been at least as alarmed as Western countries at the rapid advance through Iraq by the group calling itself the Islamic State, which was formerly known as ISIS. The militants, who advocate violence against those who don’t accept their religious views, have killed thousands of Iraqi Shiites and vowed to destroy Shiite holy sites. They also disparage Iranian influence in the country.

Their threats to the holy sites are designed to stoke tensions between Sunnis and Shiites. A successful attack on a major Shiite site could tip Iraq into a sectarian civil war, as the destruction of a Shiite shrine by Sunni militants in 2006 did. That prospect has alarmed Iran’s leadership because a larger conflict could bring down Iraq’s government, spill across the border or force Iran to send large numbers of troops into Iraq. 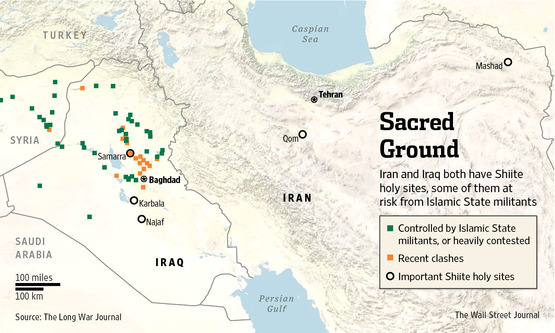 “We have to make sure this does not turn into a Sunni-Shiite war,” said Hossein Sheikholeslam, an international affairs adviser to the conservative speaker of Iran’s parliament.

So Iran’s government has strained to lay blame on a collection of enemies, arguing that what it calls a small number of fighters could only have taken so much territory with help, including from Saudi Arabia, the U.S., and supporters of the late Iraqi dictator Saddam Hussein.

Iran’s influence in Iraq has grown dramatically since the U.S.-led invasion toppled Hussein in 2003. His Sunni-led government fought a brutal eight-year war with Iran during the 1980s, and was a check on Iranian influence in the Middle East for decades.

With the U.S. occupation eventually assenting to the Shiite-dominated central government in Iraq led by Prime Minister Nouri al-Maliki, Iran has become a major power broker across the border. Trade and investment ties have grown as well, amid the flowering of long-suppressed religious ties between the Shiite religious capitals of Qom in Iran and Najaf in Iraq.

Last year, some 2.5 million pilgrims traveled each way between the two countries, according to the Pilgrimage Research Center in Qom, and billions of dollars in investment in hotels, prayer centers and religious donations have flowed with them.

“Both countries are united. We don’t even think of ourselves as separate countries,” said Hamid Reza Taraghi, who heads a religious foundation operating under the auspices of the supreme leader. “We’ve helped Iraq flourish, especially in these holy cities.”

To protect those ties, Iran has openly rushed to aid Mr. Maliki’s government with military advisers, weapons and intelligence.

Iran has made no secret of the presence of Qassem Soleimani, the head of the Revolutionary Guards’ overseas unit known as the Quds Force, inside Iraq to advise the Iraqi government and its armed forces. It has emphasized that Iran is willing to provide whatever help the Iraqi government requests, and news about the conflict is widely broadcast in Iran.

To justify those outlays, it has played up the need to protect Shiite holy sites in Iraq and help defend what it sees as Iraq’s popularly elected Shiite government.

Yet at the same time, the Iranian government has sought to play down the increasingly sectarian character the Iraqi military is taking on under Iranian tutelage. And it has sought to stress that the Iraqi government and military are capable of handling the insurgent’s onslaught.

The drumbeat of Iranian news reports and religious pronouncements has created a wellspring of emotional support for Iraq within Iran.

“We’re furious about those who insult our beliefs,” said Mohammed Vahid Nikouseffat, a 26-year-old seminary student studying in Qom.

Mr. Nikouseffat spoke as he entered one of Iran’s biggest and most prominent Shrines, known as Jamkaran. All around the towering domed mosque thousands of regular Iranians worshipers prayed and sang verses of the Quran after breaking their Ramadan fast.

Mr. Nikouseffat said Iranians are ready to help defend the holy sites in Iraq if necessary. But for now, they must obey their Supreme Leader’s instructions to leave the fight against Iraq’s enemies to the government—and a higher power.

“We believe God will judge them,” he said.