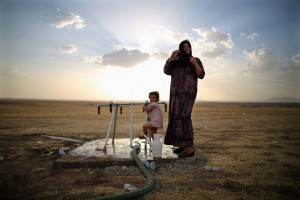 “We’ve been fighting al-Qaeda in Anbar for the past six months and we’re ready to fight for another six months, but we need American support,” Sheikh Ahmed Abu Risha said in a phone interview yesterday from Ramadi in western Iraq. “The United States must take the decision to stage air strikes against the militants or send troops again to Iraq, even if it’s for a limited time.”

His remarks were the first indication Prime Minister Nouri Al-Maliki retains some support in the minority Sunni population, which has complained of being marginalized in the years since the 2003 U.S.-led invasion that led to the ouster of Saddam Hussein. President Barack Obama has said the U.S. won’t be able to prop up Maliki unless he can unify the country or bolster an army that has so far been unwilling to confront The Islamic State in Iraq and the Levant.

Abu Risha leads the Awakening Council in Anbar province. Also known as The Sahwa or the Sons of Iraq, the councils were organized by the U.S. military in 2006 to fight al-Qaeda during a civil war between Shiites and Sunnis. The U.S. hailed the decision by the councils, whose members included former insurgents, to turn against the militants as key to a decline in violence.

Sunnis are a majority in Anbar and in areas to the north of Baghdad, while Shiites account for the majority in the south, where 60 percent of the country’s oil wealth resides. Iraq is OPEC’s second-biggest crude producer.

ISIL took the northern city of Mosul on June 10, as government troops fled, before advancing toward Baghdad. Iraqi forces this week checked militants outside Samarra, a city holy to Shiites just 120 kilometers (75 miles) northwest of the capital. In January, ISIL captured the western city of Fallujah.

The conquests were abetted by Sunni factions of Saddam’s former Baathist regime and tribal groups, according to Sheikh Abdel-Qader al-Nayel, a tribal leader in the predominantly Sunni city of Ramadi.

The willingness of Sunni groups to back ISIL, or fight under its banner without necessarily supporting its ethos, suggests the conflict is looking “more and more like a Sunni uprising” and not just an ISIL attack, said Ben Connable, a counterinsurgency and intelligence analyst at the Santa Monica, California-based RAND Corporation.

After the fall of Fallujah, Abu Risha said Maliki asked for his help to retake the city. His forces have made limited progress.

“The main reason for the catastrophic situation in Iraq right now is the withdrawal of the U.S. forces from Iraq without setting an obvious plan to protect the country,” Abu Risha said. The U.S. also failed to provide Iraqi forces with the training they need or provide the army with “a real air force,” he said.

Abu Risha’s position on supporting Maliki may be a minority among Sunnis, according to Theodore Karasik, director of research and consultancy at the Institute for Near East and Gulf Military Analysis in Dubai.

“The discourse that is running in Iraq right now seems to be favoring the Sunnis who are against al-Maliki because of the powerful triangulation between Sunni tribes, ISIL and disgruntled members of the old Saddam regime,” he said. That would prevent the majority of Sunnis from supporting al-Maliki in “a violent struggle.”

Many awakening councils are siding with ISIL it represents to them “a force that can be used to garner greater Sunni rights,” Karasik said.