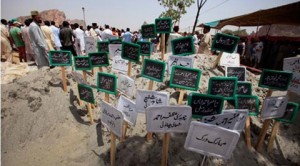 On May 27, this appeared on the front page of the Pakistani daily, Dawn: “Gunmen shot dead a doctor from the minority Ahmadi community in Chenab Nagar town in Punjab. Mehdi Ali, a 50-year-old heart surgeon from the United States, was attacked as he visited a cemetery in the town of Chenab Nagar.” The name of the town was changed from Rabwah to Chenab Nagar under the law of disabilities imposed on the Ahmadi community.

Nations trapped in the cycle of fate can’t resist a recurrent deathwish even when they know it is a deathwish. Turks can’t live down their primal hatred of Armenians, and become Turks only when they collectively hate them. Iranians have the same kind of emotion about the Bahai. Once Germans hated Jews and killed a lot of them to post their “greatness” to the world. Pakistan’s deathwish hatred is against the Ahmadi community. It lives as a nation only if it kills Ahmadis and ceases to be a nation if it stops killing them.

Pakistan’s “greatness” as a nation was asserted soon after it had its first real constitution, in 1973. The second amendment inserted into it — to remove the “flaw” of the original text — apostatised the Ahmadi community, a sect which controversially thought its founder a “prophet without a book”. Muslims hold that after Prophet Mohammed, no further prophethood was allowed. Once lapsed from Islam, the Ahmadis became non-Muslims, but that was not enough to assuage the identity-forming passion of the nation: the constitution anomalously still protected them and gave them equal status as citizens of Pakistan.

There are only two to five million Ahmadis in Pakistan. Special killing organisations often claim to have converted thousands of “Qadianis” — an insulting alternative name given to Ahmadis — every year. It is possible that Ahmadis hide their real identity to avoid being killed by vigilante mobs. In the fascist lexicon, a nation cannot become great unless it smears its face with blood. It was necessary to impose further disabilities on the community, making it possible for the administration to harass them. The penal code article 298-B stands as the singular achievement of a nation on its path to “greatness”.

The law says: any Ahmadis calling himself “Muslim” and calling his place of worship a “mosque” will be arrested and put on trial. Any reference to “kalimas (pronouncements of the Muslim faith)” or the Quran, Prophet Mohammed, his companions and the “azan (call to prayer)” would attract a prison sentence going up to three years. The level of piety among Muslims is so high that an Ahmadi serving a sentence may be killed by Muslim convicts of the prison.

The apostatisation of the Ahmadi sect has caused social upheaval. Common graveyards across the country were forcibly “segregated”, which meant digging up Ahmadi corpses and throwing them out of the cemetery amid police-aided violence. The “true” Muslims have attacked the Ahmadis’ places of worship, occupied them or simply locked them up. Wherever the condemned individuals live, their houses are marked and attacked by pious people looking to earn paradise by dispatching a few. Islamic organisations, also known as non-state actors doing jihad as a lucrative occupation, periodically go for the big kill by blowing up Ahmadis as they say their prayers.
One incident is specially quoted by the infidel liberals during discussions. An Ahmadi rented a house which had a kalima written on the front. An officer from the local police station came, registered a case against the tenant and took him in. When a brother of the tenant was erasing the kalima from the front wall the next day, the same police officer came and arrested him for desecration of the holy writ.

Every year, Ahmadis issue a report cataloguing “acts of piety” targeting their community. The report on the year 2013 makes sad reading. The province of Punjab was top of the list as Ahmadi-baiter; Sindh was a close second. Khyber Pakhtunkhwa and Baluchistan fared best as they had kicked out their Ahmadis and were focusing on Shias, the next immolated minority that will make Pakistan a great nation.

According to a report put out by an Ahmadi organisation, Karachi led in the number of Ahmadis killed and attacked, like last year, and target-killing by unknown gunmen was the new trend. In Punjab, the universally execrated infidel-liberal caretaker chief minister, Najam Sethi, tried to intervene in the case of Ahmadi-baiting in Kasur, just outside Lahore, but backed off when he realised what he was up against.

He realised that “the police remained at the beck and call of religious bigots and moved fast to register criminal cases against Ahmadis on religious grounds”. After that, if the local magistrate did not deny bail, the Ahmadi was hounded by “shrieking mullahs and their undisciplined attorneys”. In one case, a high court judge accepted an Ahmadi accused’s plea for bail, but then yielded to the threats and shouts of the protesters in the courtroom and reversed his verdict “within two minutes”.

The irony is Ahmadis can appeal only to secularists who, by and large, don’t believe in religion. The sect is orthodox and deeply religious as all persecuted sects tend to be. The English language press has some empathy with their plight but Urdu bristles with rage against them. You can see headlines like the following in the poisoned “mother tongue” of the nation: “Qadianis are traitors to Islam and the country”, “More than 1,000 Qadianis are enlisted in the Israeli army”, “Qadiani conspiracies get under way: the youth to remain prepared to wipe them out”.

The law entrapping Ahmadis is quite comprehensive but there are still holes to be filled by the clerics baying for Ahmadi blood to help Pakistan retain its pristine identity as an Islamic state. Last year, in many locations in Lahore, Ahmadis were not allowed to say their Eid prayers and, led by pious clerics, prevented from sacrificing animals, something the law did not specifically list.

Muslim states cleanse their bowels periodically and expel waste. Pakistan does that too. It has expelled Ahmadis as excrement. But Christians, and many others, are fast attaining the identity of smelly waste. For them, Pakistan has a brand-new catchall law called the blasphemy law, where even an innuendo of insult to the Prophet will attract the sentence of death. Magistrates are known to faint with fright when Christian women and children are dragged before them on charges of insult. As mobs outside shriek vengeance, the judge collapses and awards death.