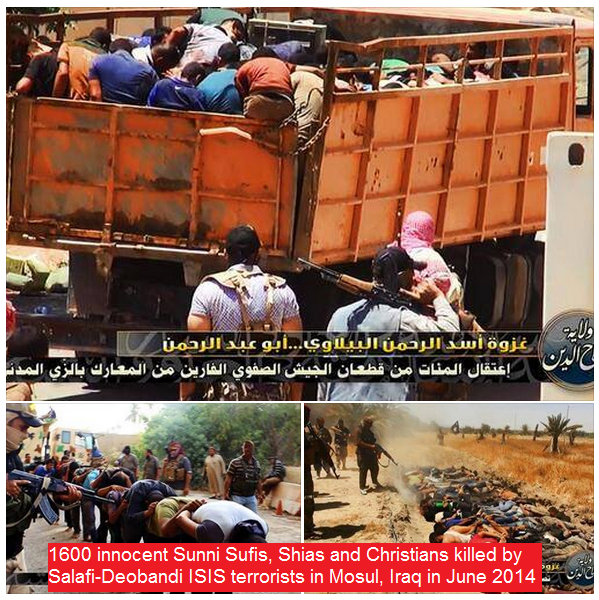 While these pictures and the video would have made my ancestor, Hajjaj Bin Yousuf, quite happy, even I sort of wimped out towards completing it.

Basically, this story starts in Homs, Syria, where as per SoS Kerry, 9-10 Syrian teenagers who were protesting, were brutalized by the Assad Regime. The movement quickly grew from there and within weeks, Free Syrian Army was formed that was Indigenous, Secular, Leftist, Progressive and Vegan.

A touching story of suffering that can justify anything.

So the ISIS, oooops, sorry, at this point they were still the Leftist Marxist Trokskyites – and Vegans, quickly took over vast areas of Syria. They were completely Indigenous with mostly Turkish, Qatari, Saudi, Pakistani, American, French, German, British “tourists” who decided to join them to take on the Assad Regime backed by the Hizbullah and the Persian Empire (Insert Cyrus from “300”)

Enter Czar Vladimir Putin, who is actually Vlad the Impaler. Enter also Iranian generals who actually have experience in fighting the Iraqi invasion of the 1980s. Between Vlad’s diplomacy and Hizbullah ability to fight against armed opponents, the ISIS, ooops, Jaba the Hut Al Nusra, ooops, FSA discovered that killing Nuns, burning Churches and Sufi shrines, chewing livers and executing unarmed people was not the same as fighting someone who actually fought back.

Having lost Syria, we had still not lost the spin. So Assad was blamed for the FSA morphing into another version of Al Qaeda and attacking the regime. We kept revising our estimates of the FSA – Al Qaeda mix till we came to a point where there was not FSA – Just ISIS. Many of them surrendered as Turkey and Qatar lost the stomach.

So what to do with ISIS? If they started returning to London, Paris, New York and Toronto, more shit would hit the fan. What if the ISIS Dudes who posed with Senator John McCain wanted another photo op – this time on the Homeland?

Send them to Iraq, where the spineless crony government of Nouri was even more pathetic than the PPP Sindh Government of Qaim Ali Shah.

The ISIS started taking over parts of Iraq. In Mosul, 30,000 soldiers under 3 ex-Baathist soldiers abandoned the city to 1,000 ISIS. Mass murder started with the bulk of the victims being Sunni. Salafi ISIS, bolstered by Deobandi Talibani imports from Pakistan, considers some mainstream Sunni sects as “polytheistic” due to the latter’s Sufi tendencies. I don’t want to give too much away so that we can continue obfuscating the issue but the Salafists and Deobandis prefer Stark Literalism as opposed to Soft Traditionalism.

Comrades, it is important that we don’t highlight the diversity within different muslim sects and instead use vague terminology like “Islamists” or sweeping terminology like “Sunni’ to continue hiding the specific Salafist beliefs of ISIS.

So after massacring a few hundred Sunnis, Christains and Shias in Mosul to go along with Church burnings, mosque takeovers and Crucifixions, the ISIS are finally meeting resistance. And its not looking good.

Sistani, an old apolitical Ayatullah, living in a room in Najaf has asked the Iraqis, in NON-SECTARIAN terms, to defend their countries and the shrines that are revered by Shias and Sunnis alike. This also includes the Shrine of Imam Hanifa – founder of one of the four main schools of Sunni Islam. FYI, the Salafis, aka Wahabis had also destroyed these shrines two hundred years ago and are itching for a repeat.

Thanks to BBC and CNN, we were once again able to obfuscate this issue. Behaving like Wahabi clerics, both BBC and CNN deliberately misreported the statement of Sistani. But its not looking good – for the ISIS and for all the Good Liberals, media, ASWJ, Taliban etc etc who are united in portraying the Salafis vs the Rest as a Shia vs Sunni.

Please help us in spinning this. The Video of ISIS randomly gunning down Iraqis is very damaging to the cause of BBC and CNN as it harms the Shia vs Sunni narrative that is so important to take the entire region up in flames.

This Sistani is the same crafty Ayatullah who immediately curbed the pogroms against Sunnis in 2006 by the Shia extremists under Sadr who were retaliating against the destruction of the shrines in Sammara. He has consistently played the INCLUSIVE card so shame on Sistani for thwarting our efforts to rip apart Iraq on the basis of sectarian fault lines.

If Nouri Al Maliki is not sufficient to destroy Iraq, import Bilawal and Qaim Ali Shah there as well. That should do it.