Home  »  Newspaper Articles   »   Staring at women is an Indian pastime, even nuns get stared at: travel expert – by Prasun Sonwalkar 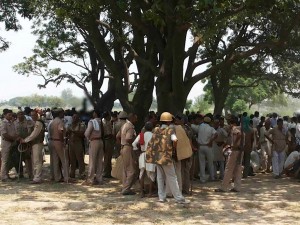 Reports of rape and sexual assaults on women in India continue to make headlines in the British media as the Foreign Office advisory asks women travelling to India to exercise caution and one India travel expert concludes that ‘staring at women is an Indian pastime’.

After Narendra Modi’s election victory, India has mainly been in the news here for the Badaun rape and hangings, and for Madhya Pradesh home minister Babulal Gaur’s reported remark that ‘sometimes rape is right’.

Hundreds of women protested outside the Indian high commission last Wednesday against the rapes in Badaun and Bhagana (Haryana), prompting Indian authorities here to issue a detailed note on the action taken so far in Uttar Pradesh.

Thousands of readers responded online with disgust and worse to such reports on British news websites, while Britons travelling to India sought out travel experts for advice on ‘what to wear in India: advice for female travellers’.

Gill Charlton, an India travel expert at the Daily Telegraph, responded to such a query, writing: “Staring is an Indian pastime; even nuns get stared at. But if you want respect, then dress conservatively”.

Her advise was: “A long scarf, known as a dupatta, is useful in the cities. Even Indian sophisticates wearing skin-tight jeans will fling one over their shoulders in crowded places to obscure their breasts from men who might try to touch them”.

The Foreign Office’s advisory on this issue says: “Women should use caution when travelling in India. Reported cases of sexual assault against women and young girls are increasing; recent sexual attacks against female visitors in tourist areas and cities show that foreign women are also at risk”.

It notes that British women had been the victims of sexual assault in Goa, Delhi, Bangalore and Rajasthan and that women travellers often received “unwanted attention in the form of verbal and physical harassment by individuals or groups of men”.

Recalling that serious sexual attacks involving Polish, German and Danish women travellers had been reported in 2014, the Foreign Office says: “If you are a woman travelling in India you should respect local dress codes and customs and avoid isolated areas, including beaches, when alone at any time of day”.