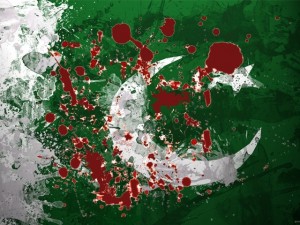 I google ‘Pakistan’ on the news and everything that is reported is about death, destruction, squabbling politicians, ailing children, extremists blowing up things and a struggling economy.

But I know also/Why it fails to recognise me. – ‘The exiles lament’ Norman MacCaig

Recently a friend visiting Peshawar and Islamabad after four years narrated to me a story about a recently retired colleague in Peshawar. This colleague had been a successful government official for much of his life and had also been a local activist in Peshawar. Despite these ties his colleague had sold everything and moved to the capital. When he met him he found a man both happy at the opportunities the capital offered his children and depressed at his social isolation.

For me, this little anecdote signified something noteworthy happening in the Pashtun belt stretching from Chitral’s Lowari pass and south to Qila Saifullah. The region is experiencing the greatest migration within and outside the region possibly for over a century since the great Frontier rebellion of the late 20th century.

Many readers will probably ask why this great migration has gone unnoticed by so many in Pakistan. The reality is that the tribal ethos of taking in those they share an affinity for has absorbed the bulk of the impact. Sadly, for those less fortunate amongst them little help has come their way from the state and the rest of the country.

Traditional scholars of the region like Akbar S Ahmad and books of reference often used by researchers like Olaf Caroe’s ‘The Pathans’ and James W Spain’s ‘Pathans of the latter day’. They saw the region in traditional terms – divided into distinctive regions as late as the 1990s and 9/11 – and distinct from the Pakhtuns of Afghanistan.

The class-based hierarchy of Mardan, Charsadda and Swat is dominated by a few groups. The influential and powerful Khans. The oft-forgotten Hindko, Seraiki, Kohistani, Chitrali and non-Pashto speakers of Peshawar, Kohat, DI Khan, Hazara, Kohistan and Chitral. The Maliks of Fata reinforced by the Frontier Crimes Regulation through financial inducements and powerful political agents. The conservative electables and influentials of southern Khyber Pakhtunkhwa and northern Balochistan.

These established hierarchies were in turn governed by a myriad of laws and financed by a basic but gradually developing industrialisation. In addition to this there was everything from overrepresentation in the military, remittances from far away Karachi, expatriate labourers in the Gulf States and the Afghan transit smuggling trade.

Culturally the Pakhtun were seen through a prism of their own cultural code. The Pakhtunwali code consisted of hospitality, the right of asylum, revenge, bravery and issues of honour. This code was used by both elites amongst the Pakhtuns of Pakistan and the Pakistani middle class to glamorise life – and, for many, excuse underdevelopment. At the same time there was a sense of individualism and relative egalitarianism compared to the more hierarchical societal structures in southern Punjab, Sindh and Balochistan.

Politically the region was dominated by the Pakhtuns and non-Pakhtuns of the ‘settled areas’ – whether Kashmiri, Tarins, Yousafzai, Kakar, Marwat, Khattak or Muhammadzai. These were politicians, generals and bureaucrats like Abdul Qayyum Khan, the Wali of Swat, Abdul Wali Khan, generals like Habibullah Khattak and Waheed Kakar, bureaucrats like Ghulam Ishaq Khan and Roedad Khan.

Historical trade routes, wars and geography have meant that migration has been common to the region. The road – and later on rail – works were built for troop deployments and transit trade through the region and not as tools to integrate various parts of the region together. This imperial legacy was inherited by the new state of Pakistan in 1947.

The lack of development ensured that the major source of employment would remain migration of labour. Their lack of education meant that much of that employment would be in the areas of construction and transport work.

At the time of the creation of the state of Pakistan in 1947 the Pakhtun belt remained largely untouched from the horrors of Partition. Out of the four provinces Punjab, Sindh, Balochistan and the then NWFP and federally administered tribal areas (Fata), NWFP and Balochistan escaped the communal violence of partition and the Pakhtuns became the second biggest ethnicity in the western wing of the country.

The scale of the events of Partition on the areas on the border was enormous. Cities like Karachi ended up with over 50 percent migrants compared to 10 percent in Peshawar. While there was initial political and cultural dissent as the new government imposed its idea of a unitary political, linguistic and cultural state, the region rapidly integrated into the new state. The economic boom was centralised in business centres like Karachi from the Pakhtun belt by 1980 out of an estimated 8 million people an estimated 1.5 million were Pakhtun.

After the breakup of Pakistan in 1971 and creation of Bangladesh there was a second economic boom in the Middle East following the increase in oil prices. Robert Nichols book ‘A History of Pashtun Migration’ highlighted some of it. By 1981 it was estimated that 34.6 percent of the national total of Pakistanis over ten years were from the (then) NWFP. While those figures do not include Fata and Balochistan it is safe to say the region benefitted two to three times their representation in the country.

At the same time the increasing economic influence of Pakhtuns in Karachi created resentment in the dominant Urdu-speaking community. It has seen a major spike in Pakhtun migration into the city from eight percent in 1981 to 11 percent in 1998 making it the biggest Pakhtun urban centre in the world. Many of these migrants have taken up jobs in small businesses and transport. This culminated in the violent ethnic riots in the 80s triggered by the death of a young girl in a traffic accident. The subsequent backlash made the city relatively less inviting to new migrants.

While in the Middle East, the increased competition from lower cost workers from countries like Bangladesh and the Philippines led to a relative decline in the presence of people from Pakistan in general. The common factor linking Karachi and the Middle East was that while the Pakhtun presence was significant, it was not perceived as permanent. This was in part because many migrants did not leave with their families, due to the economic cost and in case of the Middle East visa restrictions.

The factors that have upended this old system are not hard to place – the US occupation of Afghanistan side by side with armed revolt, in the presence of thousands of foreign troops and support personnel and hundreds of billions dollars being spent per year and the associated development work as well as development work. This was side by side with multiple military operations, governance vacuum and the ensuing economic collapse.

A recent report by writer Javed Aziz provided some insight into the scale of the attacks. Around 3,275 militant attacks were carried out all over Khyber Pakhtunkhwa during the last nine years in which 4,175 people, including 1,381 personnel of civil and armed forces and 2,794 civilians, were killed and 8,054 civilians and 3,010 security personnel were wounded.

The writer is the founder of the social media forum, Qissa Khwani Foundation, and a freelance contributor.