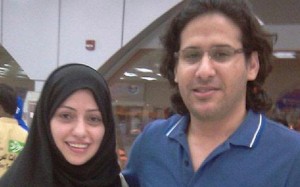 Samar Badawi has done jail time to advance women’s rights, and now husband Walid Abulkhair will represent himself in court against the kingdom.

Samar Badawi and Walid Abulkhair are Saudi Arabia’s most high-profile human rights couple. Samar is a leading women’s rights activist who was jailed for disobeying her father who physically abused her for fifteen years. She took him to court and won a human rights award for courage presented by the State Department.

Samar’s husband, Walid Abulkhair, was jailed last month after years of staunchly defending the Kingdom’s leading human rights activists. On May 28, Abulkhair will appear before a Special Criminal Court in Jeddah for the sixth time to be tried for “inciting” public opinion and other spurious charges.

Days ago, I spoke with Samar who is campaigning tirelessly for her husband’s release. I asked Badawi if she and her husband expected him to be jailed at some point. “Every independent activist in Saudi Arabia expects to be arrested,” she said.

Badawi adds that her husband was subjected to the government’s “carrots and sticks” approach to quash his activism. “He was interrogated and investigated countless times and taken to court repeatedly. He was harassed by the police and received many threatening phone calls. He was continually pressured at work and eventually was sentenced to jail. He was always ready to go to prison.”

What exactly are the charges brought against Abulkhair? “Disobeying the rulers” and “offending the judiciary” and “inciting international organizations against the Kingdom of Saudi Arabia.” In reality, the Saudi dictatorship simply got tired of his persistent defense of political prisoners.

Abulkhair does not have to look far for representation; his lawyer will be the Kingdom’s best human rights attorney: himself.

Badawi first met Al Khair in 2009, when she approached him for a legal advice regarding her case. They soon fell in and got married. I asked Badawi if she ever asked her husband to stop his activism? “No,” she says resoundingly. “I never pressured him, and would never do that. I am not exaggerating when I say that if Walid ever thought to acquiesce to pressure, and stopped his activism, I might change the way I look at him. Walid has known me as a woman who fights for her rights, and I know him as a person who supports the value of human rights and who calls for equality and justice.”

In 2007, Abulkhair co-authored a petition calling on the Saudi royal family to accept a constitutional monarchy. He has worked tirelessly to support women’s rights,including driving a car. He is known as the Kingdom’s fiercest defending of political prisoners. He also now joins many other Saudi liberals jailed for calling for more freedom, Raif Badawi and Turki Al Hamad to name just two.

As a former political prisoner myself—jailed and tortured under the Assad regime in Syria—I know the pain of being denied your freedom. Middle Eastern nations will continue to suffer so long as they imprison, repress and expel their most courageous defenders of liberty. Meanwhile, these brave dissidents can’t help but ask why the West supports their unelected dictators rather than democratic activists. The inverse priorities speak volumes.