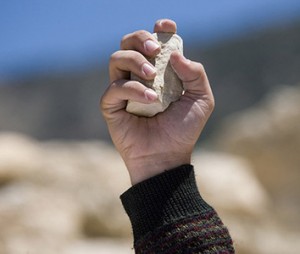 Before Farzana Parveen was bludgeoned to death with bricks there was Shahida Parveen who was sentenced to be stoned. In early 1988, when democracy was new and a woman was about to take over the helm of the country, another woman was condemned to being stoned to death.

The case of Shahida Parveen and Mohammad Sarwar (NLR 1988(SD) FSC 188) came before a trial court because Shahida’s previous husband alleged that he had never really divorced her. When Shahida declared that he had orally declared the divorce three times and sent her home to her family, the trial court did not believe her.

When she produced a written divorce decree they still did not believe her.

There was a requirement that the divorce be registered they insisted. Based on this premise, the trial court found the marriage of Shahida Parveen and her new husband Mohammad Sarwar to be illegal and their cohabitation was considered a confession of “zina”.

But Shahida Parveen was lucky, she was not killed instantly and upon retrial she and Mohammad Sarwar were finally acquitted. That, however, was not the end of the punishment.

More recently, in a case from 2002 (PLD 2002 FSC 1) a sessions court in Kohat found a woman, Zafran Bibi guilty of adultery and sentenced her to be stoned to death. The prosecution in that case had alleged that Zafran Bibi’s pregnancy was proof of adultery. Zafran Bibi’s own remonstrations, that she had been raped by her husband’s brother while her husband was in prison were discarded because she could not prove that she had physically resisted the rape.

While this verdict was also eventually overturned for other reasons, the rendering of the verdict by the trial court, illustrates the truth of Pakistan’s current law; that women can be sentenced to being stoned to death.

If the state can stone to death, the people cannot be far behind. In this lies the pathos of Farzana Parveen’s final moments. Before she was attacked, before she was bludgeoned to death, she believed that the State would listen, that courts cared and that there was a real possibility of justice.

In her hope, thus she was unaware as many of Pakistan’s women are about the institutional degradations that the law of their own country imposes on them. Not only does the Qanun-e-Shahadat Ordinance reduce women to half witnesses in certain cases, the still standing Zina and Hudood Ordinances continue to require four witnesses for women to prove rape.

The Amendments that were introduced in 2006 by the Women’s Protection Act were declared unconstitutional by the Federal Shariat Court in December 2010. The National Assembly had until June 22, 2011 to amend the legislation such that the provisions that prevent rape complaints to be used as confessions of adultery or fornication could remain. They failed to do so, and the law as it stands, can still sentence rape complainants to be stoned to death.

Farzana Parveen was dead long before she was actually killed. She died when she imagined herself, a Pakistani woman, as a full person capable of making her own decisions, choosing the man she would marry.

The law of the land in which she was born, in which she lived, and in whose justice system she sought a safe haven, does not believe her to be so.

In the aftermath of the grotesque stoning, that grim indictment of a country that no longer knows moral outrage, whose institutions exist only to pad the pockets of its most perfidious, the question is not about family honour or apathetic police. The question is instead, whether as a country, Pakistan can consider to put in place a moratorium on stoning.

In the aftermath of the attack on Farzana Parveen, this latest victim to be sacrificed to the mob driven purges Pakistan now indulges in with a greedy frequency, Prime Minister Nawaz Sharif has, in the tradition of previous leaders, asked for “immediate action” and a report.

To prevent another tragedy atop our already existing ones; the Prime Minister’s call to action must initiate not simply a witless (and largely meaningless) call to “end honour killings”, instead, the state should do what it can do, eliminate stoning as a punishment on its own law books, initiate a resolution in the National Assembly that reinstates the lapsed provisions of the Women’s Protection Act of 2006.

If the elected representatives attach even some consequence to the acts of the mobs that roam the country’s streets, waiting to discipline women, to rape them and kill them, then the lives of Pakistani women like Farzana Parveen, may actually begin to matter more than for the tiny moment in which they are murdered