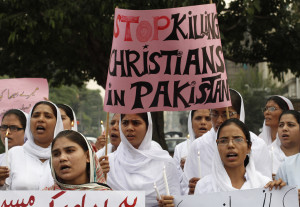 Ambreen speaks the local language, Pashto, fluently. She wears the local dress and by all looks and appearances she isn’t any different from other women in her native city of Peshawar, in Pakistan’s northwest.

But her Christian faith sets her apart _ too far apart from the rest. She says her Muslim neighbors would not like to shake hands with her.

And this past Christmas, the local baker refused to decorate Ambreen’s Christmas cake with a cross out of fears that doing so might draw retribution from militant Muslims.

Ambreen’s story is a narrative of how Pakistan, a majority Muslim state, appears to be sliding deeper into religious extremism. In recent years,members of other faiths, ethnic minorities and even followers of smaller Muslim sects, have faced growing threats and attacks.

Minorities make less than four percent of Pakistan’s 180 million population and those who are able to, leave Pakistan and migrate to other countries.

Haroon Sarb Diyal, a minority rights activist, stressed the need for a drastic change immediately on local and national level in order to make Pakistan safe for minorities. He said members of minority groups are targeted because of their faith where they have seen violence, killings, forced conversions and forced marriages.

A recent report by United States Commission on International Religious Freedom (USCIRF) said, “government of Pakistan continues to engage in tolerant systematic egregious violations of freedom of religion or beliefs.”

Members of minority faiths voiced their concerns in VOA Deewa Radio’s weekly show on women.  Many of them said conditions for minorities weren’t so bad 10 years ago and that minorities lived in peace in Pakistan.

Militancy has risen in Pakistan since 2001. Militants are blamed for deadly attacks on the government, religious and ethnic minorities, women and schools.

Now, Ambreen says life for a non-Muslim school going boy or girl is different. They are faced with harsh attitudes and no one would like to shake hands with them or share food with them. Some analysts blame growing intolerance of minorities on school text books.

Ambreen says conditions had not always been like this when she was growing up.

“Now I was surprised when a local bakery refused to decorate my Christmas cake with a cross sign,” Ambreen says.

“This isn’t a neighborhood I would want to be in the future”, another minority member in Pakistan told VOA Deewa while expressing concern over the state of minorities in Pakistan.

In Punjab and Sindh provinces, minorities face another form of intimation. Denigrating Islam is punishable with death under Pakistan’s blasphemy laws and in Sindh and Punjab, most police cases are registered against minorities, after they are accused of insulting Islam. United States Commission on International Religious Freedom (USCIRF) says in Punjab and Sindh provinces 16 individuals belonging to minorities are on death row and 20 more are serving life sentences.

But many say the steps taken by government are not enough and more needs to be done in order to encourage minority groups in Pakistan to stay back.