Home  »  Original Articles   »   ‘Ripeness is all’: Surrender to Duty and Parenthood – by AZ 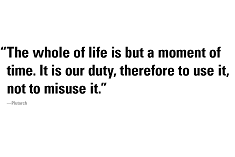 (Prologue:  Not long ago, my son and I were wandering around, looking for the signs of a spring that has been usurped by an unusually obstinate winter, and I remarked in response to something that all man’s efforts are selfish except what he deems as his duty. This got us discussing the concept of duty and the importance of being able to define it with reason and without passion and prejudice. Then my son asked what I think is a parent’s duty to his/her child apart from looking after and providing for the child in the traditional manner. And we rambled on.)

“He who has done his duty let him ask for no other happiness. Do thy duty which lies nearest thee, which thou knowest to be thy duty, and second duty will already have become clearer.” said Carlyle. I think the concept of duty is the foundation of every other moral order; it is the way of life which acclaims and ennobles it. Let’s look at the justification for the attitude of surrendering oneself to duty. Let’s start by considering what is it that can be regarded as truly our own. I am not thinking of merely holding the title to something. Our possessions are mere add-ons and often we turn them into a heavy load whose burden weighs us down. Now, is our body truly our own? Was it not handed to us by our parents and has benefitted from an incessant process of refinement called evolution. Once we inherit it, it is nurtured and refreshed by a biological process which is independent of our will. Then, is our mind our own? Its individuality, value, and character are hugely influenced by the world outside us. Do we know what is this thing called ‘I’ that pretends to be the owner and possessor of everything? Has anyone seen it? Hence, in the final analysis nothing belongs to us except our effort. Our body, our mind, and the ‘I’ in us are all supplied in a mystifying way by the universe in which we exist for a while and then vanish leaving ‘not a wrack behind’.

Can then we have any nobler attitude than one of duty towards the universe? The word duty stems from debt and we all owe a debt to the universe. Carlyle yet again resonates in my mind, “Labour is life. Properly thou has no other knowledge but what thou hast gauged by working: the rest is achieved by a hypothesis of knowledge: a thing to be argued out in the schools, a thing floating in the clouds, in endless logic vortices till we try it and fix it. If this is not worship, the more pity for worship.” The categorical imperative in the words of Carlyle is, “work while it is called Today for the Night cometh wherein no man can work.” All knowledge is born out of action. According to Goethe, “We come to know ourselves-never by speculation but by action. Try to do your duty and you will know at once what is your worth.” Then he describes our duty as “The demands of the day”.

What we learn in theory or through books is mere hypothesis unless we turn it into the means of our being. The wise ones have always said that life is the art of drawing sufficient inferences from insufficient premises. Practise what you know and it will help to make clear what you now don’t know and inquire about. Shakespeare urges: “man must learn to endure their going hence, as even their coming hither-Ripeness is all.” Yes, indeed, ripeness is all. The highest merit to claim our labour is ethical in nature. Moral causation is as much real as natural causation. Evil actions are foes of life’s facility for growth. Entire course of human history bears out this truth. Man is summoned to defy injustice, inequality, and oppression for no other reason except that the moral values are supreme.  Many chase happiness as if happiness by itself is a meaningful purpose to follow. They forget that happiness is not, and from the nature of life, cannot be an end-in-itself. It is a mere spin-off of a charge determinedly assumed as a duty.

It is also a duty to earn one’s livelihood lawfully and to resolutely resist all corrupt enticements to sell one’s birthright for a mess of pottage. While bribery and overt inducements have been largely controlled in the developed world, other forms of corruption remain rife. We regularly find bands of men upright in outward appearance but low buccaneers in reality going about pursuing jobs which are sinecure, contracts on public revenues which are assigned without merit, orders which never insist on value for money, and similar means for profits without merit or efforts. The whole spectacle is as sickening as the sight of corrupt officials in poorer countries and a lot more scavenging.

The truth is that we cannot flout the moral law except at the expense of our own evolutionary development. It is true that the individual disregarding the moral law may not see the retribution even though his development is penalized and his values are falsified. Poetic justice is more a theme for dramatists than a reality of life. In real life fraud and injustice can often triumph in attaining the result of their attack on right and right may go un-redressed till the end. But what is inevitable is that the society and the community in which the disregard of right becomes common and acceptable, worsens and perishes. While the individual may profit by the injustice, the society of which he is a part and the class which enjoys the fruit of that injustice undergo an inevitable decline. Such is the inexorable law of nature.

The man who has such humble confidence in his rectitude as to be ready to open his bosom to the scrutiny of the world, owns one of the strongest attributes of human character. The life’s course of such a man will be determined and steady because he has nothing to fear from the world. To me, all education must be directed towards making its subjects courageous in wise and diligent cultivation of intellect with the dignity of a disciplined mind. I regard it as the primary task of parents to help their children develop a well-balanced and disciplined mind that is equipped to rectify the wickedness of worldly passions. We must teach our kids to obtain self-discipline, the habit of subjecting passion and prejudice to an honest and reasoning will. If you succeed in achieving that for your kids, not only will you have done well as a parent but you will have also contributed to alleviating misery from society. Education is nothing else but the application of the best means endorsed by the collective wisdom of humanity in order to thrive resolutely. The foundations of civilizations are laid in knowledge, not upon wealth; and a society’s scorn at education, intellect, and liberty, ultimately

brings about national degeneration and wreck.

It is the duty of parents to bring about intellectual and moral awakening among their children.A parent must help his/her kids to grow up as serviceable instruments in consummating life’s purpose. Parenthood is the greatest institution for cultivating the human mind. Only a mind that is disciplined can be free because freedom is possible when the human mind nurtures the law of inner restraint necessary to distinguish from the mind of a savage or an animal. As parents it is our duty to help in evolving those capacities in our children that are needed to face with confidence the work of the world that is waiting for them. The problems of life are too numerous for any parent ever to hope that he/she can provide the child with set solutions. Instead the ideal to pursue is to strive that our children evolve a balanced mind, a power of judgment, and a sure capability for that detached and unbiased observation which is a must for anyone to perceive in the complicated state of life’s affairs the heart of the problem begging his attention.