Editor’s note:  We are cross posting here a report from our friends at the LWJ which confirms increased fighting between ISIS and Al-Nusrah, with terror theater now extending to Saudi Arabia. This is not surprising and the ultimate end to all Takfiri conflicts. In search of the best possible and perfect Muslim, eventually there will be only one Muslim left, the most perfect one.

Arabic media outlets recently reported that a statement has surfaced on Twitter threatening to bring the fierce rivalry between Jabhat al Nusrah, or the Al Nusrah Front of the People of the Levant, and the Islamic State of Iraq and the Sham (ISIS) from the battlefields of Syria to the Kingdom of Saudi Arabia. The statement, whose title bespoke its authors, “Saudi Mothers and Wives of ISIS fighters,” threatened to initiate a campaign of assassinations against religious authorities in Saudi Arabia who are supportive of the Al Nusrah Front. The menacing statement went so far as to include the families of the targeted religious authorities in these bold threats.

The statement, signed by 20 Saudi women, expressed the women’s “shock” in response to a suicide attack that targeted an ISIS headquarters in Syria carried out by a Al Nusrah fighter dressed as a respected sheikh. In their statement, the women warned “misleading preachers” that they would bring the fight to their doors if one of their sons fighting alongside ISIS is hurt as a result of their sedition (fitna).

“We swear by almighty Allah, we will take revenge on your families and make them taste the dose of sorrow as you have made us taste,” read the statement publicized by Al Wasat News. The women named particular preachers, including Adnan al Arour and Shafi’ al Ajami, described as publicly supporting Al Nusrah over ISIS.

After the statement was issued, Twitter accounts linked to both ISIS and Al Nusrah began tweeting lists of people whose “blood is forfeited.” The ISIS list was made up nine personalities from Saudi Arabia, Kuwait, and the United Kingdom. 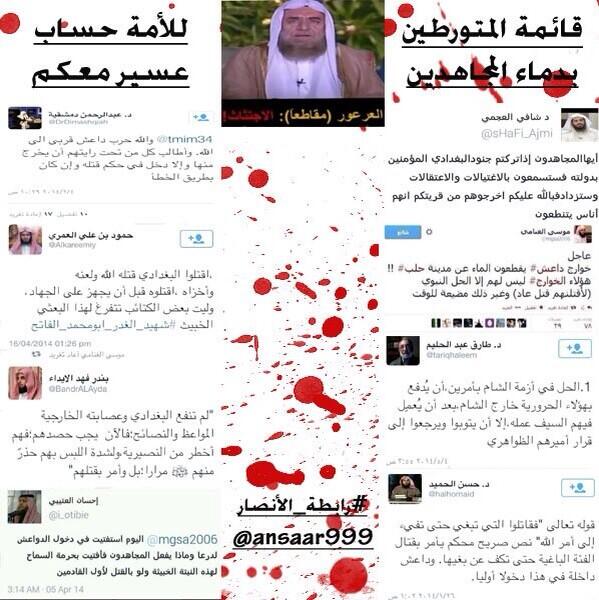