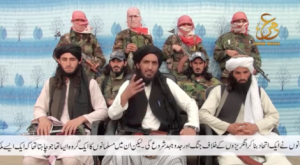 When it comes to Pakistan’s bad guys, leaders of the country’s major militant groups—such as Hafiz Saeed Salafi of Lashkar-e-Taiba and Mullah Fazlullah Deobandi of the Pakistani Taliban—tend to hog the headlines.

Many more are less well known—yet still highly consequential. Five in particular are worth singling out—not just because they threaten stability, but because they foreshadow Pakistani militancy’s future trajectory.

The evolution of this trajectory will likely feature five distinct trends: Uncompromisingly violent anti-state militant factions constraining Pakistani government peace efforts; associations with a resilient al-Qaeda that remains fixated on both local and global targets; a re-emergence of India-focused militancy; sectarian extremists with strong political influence and associations with the state attempting to earn legitimacy from an increasingly radicalized society; and state assets violently turning on their patrons at a time when the Pakistani security establishment can ill afford new sources of unrest. The five men described below each exemplify one of these trends.

Khorasani, who heads the Mohmand tribal agency branch of the Pakistani Taliban, may be the most dangerous Taliban leader in the country.

Even by the Pakistani Taliban’s barbaric standards, Khorasani is uncompromisingly brutal. In recent months, while his organization was attempting negotiations with Islamabad, the former journalist was implicated in several high-profile attacks. In February, he ordered the execution of 23 Pakistani paramilitary soldiers held in captivity since 2010. Pakistani officials believe he was also responsible for the bombing of an Islamabad marketplace in April, and suggest he also may have had a hand in an assault on an Islamabad courthouse in March.

Khorisani mocks as much as he murders. On April 19, the day prominent Pakistani journalist Hamid Mir was shot in Karachi, Khorasani’s spokesman tweeted Mir that, in effect, an attack on him was inevitable (he did not assert responsibility, however).

Khorasani has unequivocally stated that Sharia law must be imposed throughout Pakistan. “We aren’t even in favor of 99 percent Sharia,” he said in a video released this month. “We want 100 percent Sharia.” In interviews, Khorasani insists that Pakistan—not Afghanistan or the United States—is the core enemy. And he has vowed to seize Pakistan’s nuclear weapons.

Such views are telling. Some commentators (including myself) have speculated that in the coming months, the Pakistani Taliban is likely to intensify its operational cooperation with the Afghan Taliban in Afghanistan. Others have pointed to the organization’s increasingly international bent, as it has bragged of sending forces to Syria.

Umar is an al-Qaeda propagandist (he is also affiliated with the Pakistani Taliban). While a relative unknown, his star appears to be rising. He was featured in an al-Qaeda film that commemorated the 11th anniversary of the 9/11 attacks, and this month al-Qaeda announced he’ll be the subject of an “open” (presumably online) interview airing in mid-May.

Umar’s ideology is classic al-Qaeda. He spouts the requisite anti-Americanism (he has published a book on Blackwater called The Army of Anti Christ). He also emphasizes the global—and U.S.-focused—dimensions of jihad. In a video message last year, he called for “global jihad to give a final push to the collapsing edifice of America.” He added that “lives are being sacrificed in this jihad to defeat America and its allies everywhere.”

Since Umar is a propagandist, his messaging provides a window into al-Qaeda thinking. And on this count, it’s clear that the organization—at least rhetorically—remains fixated on America. For all the talk of a weakened al-Qaeda core in Afghanistan and Pakistan giving way to a series of affiliated groups focused on local matters in the Middle East and North Africa, it’s quite clear al-Qaeda central still has the far enemy on its mind—and from its long-time perch in Pakistan to boot.

To be sure, Umar has also called for a Subcontinent-focused jihad—highlighting how Pakistan-based al-Qaeda is focused on the near enemy as well. And in this regard, as I have argued in a previous War on the Rocks article, al-Qaeda gets plenty of help from its associated South Asian militant groups such as Lashkar-e-Taiba, Lashkar-e-Jhangvi, and both the Pakistani and Afghan Taliban.

Azhar is the head of Jaish-e-Mohammad, an anti-India terrorist group thought by New Delhi—and many other capitals—to have received support from the ISI, Pakistan’s main spy agency. Azhar spent time in Indian prisons in the 1990s, before being released in 1999 as part of a deal to end a hijacking crisis involving an Indian airliner. India believes he orchestrated an attack on India’s Parliament in 2001. He is also accused of involvement in an attempted assassination of Pakistani president Pervez Musharraf in December 2003 (he allegedly conspired with Adnan Rasheed, a former member of the Pakistani Air Force).

Not long after these incidents, Azhar largely disappeared from public view.

In January, in the capital of Pakistan-administered Kashmir, an anti-India rally broadcast a fiery recorded lecture from Azhar. And in February, he was scheduled to make an appearance at a university in Lahore—until administrators abruptly cancelled it.

Since resurfacing, Azhar has boasted of having 300 suicide bombers at his disposal ready to attack India, and threatened to kill Narendra Modi if he becomes India’s next prime minister.

With most international troops leaving Afghanistan this year, many militant groups operating in that country—particularly those like Lashkar-e-Taiba that are anti-India to the core—will likely redirect their attention to, and expand their operations in, India. Azhar’s reemergence (possibly with the connivance of Pakistan’s security establishment) may be telegraphing this strategic shift, and particularly if seen in the context of Asim Umar’s recent exhortations. Umar has explicitly called on Indian Muslims to mobilize for jihad: “How can you remain in your slumber when the Muslims of the world are awakening?”

Ominously, if Pakistani militants like Azhar are indeed taking their fight back to India, they could find numerous willing accomplices there. In recent weeks, Indian security experts have warned of new Islamist militant cells popping up across the country.

Khorasani and Azhar are militant leaders, while Umar is a jihadist propagandist. Ludhianvi is a sectarian extremist who, for a brief period this month, was a member of Pakistan’s Parliament.

Last year, Ludhianvi unsuccessfully ran for a parliamentary seat in Punjab province. He filed a complaint with Pakistan’s election commission, arguing that the declared winner was a loan defaulter and hence unfit for office.

On April 10, a Pakistani election tribunal ruled in his favor. Yet instead of calling for a special election, Ludhianvi was told that he could simply have the seat—until Pakistan’s Supreme Court reversed the tribunal’s decision on April 21.

That the Pakistani state was willing to give him the seat should come as no surprise. The current government regards Ludhianvi as a strategic asset, and has leaned on him for various favors—from reaching out to the Afghan Taliban about peace talks to (ironically) helping reduce tensions in violent neighborhoods. Additionally, high-ranking officials of the ruling Pakistan Muslim League-Nawaz party have made joint campaign appearances with Sipah-e-Sahaba leaders. And last year, in the lead up to national elections, rumors abounded of a “seat-adjustment” agreement: The Pakistan Muslim League-Nawaz was to support the Ahle Sunnat Wal Jamaat in races for several National Assembly seats, while in return the Ahle Sunnat Wal Jamaat was to withdraw its candidates from contesting a number of National Assembly seats in Punjab.

In a nation where the underlying views of sectarianism enjoy considerable public support—polls find that more than 40 percent of Pakistanis believe Shias are not Muslims—Ludhianvi’s next moves warrant close attention. Through his role as a government intermediary and seeker of political office, he is apparently intent on projecting a softer image. He may be part of a recent effort by numerous Pakistani militants to legitimize themselves in the public eye (the Pakistani Taliban’s peace efforts, and Khorasani’s expressions of sympathy for Pakistani drought victims, are additional examples).

In a society growing increasingly radicalized, such legitimacy isn’t so hard to earn.

This mysterious man’s career is a chilling example of what can happen when Pakistani militants turn on their sponsors.

In the 1990s, Gul was a Kashmir freedom fighter, and Indian and Pakistani observers alike assert he enjoyed a close relationship with Pakistani intelligence. A U.S. diplomatic cable made public by Wikileaks in 2011 even described him as a former major in the Pakistani army.

Like Azhar, Gul kept a relatively low profile in more recent years, though he occasionally gave interviews in which he vowed to continue fighting for Kashmir.

And then, again like Azhar, in just the last few months he has exploded back onto the scene—but with a very different game plan. In February, he claimed responsibility for a restaurant attack in Peshawar. Mufti Hassan Swati, a Pakistani Taliban leader in Peshawar, announced at a press conference that the organization’s top leadership had tasked Gul—who appeared at Swati’s side—with the operation (interestingly, according to Pakistani media reports, officials believe both men are affiliated with Ahrar-ul-Hind).

A spokesman said Gul had also carried out an assault on Shias at a bus terminal in the northwestern city of Kohat later in February. And, after an attack on the Iranian consulate in Peshawar killed two Pakistani paramilitary soldiers just a day later, the spokesman said Gul was behind that strike as well.

Hizbul Mujahideen, the Kashmiri militant group to which Gul once claimed allegiance (and which has had ties to Pakistani intelligence), has now disowned him.

There are many troubling dimensions of Pakistani militancy, from anti-state violence and sectarian savagery to more regionally and internationally focused terrorism. Yet perhaps nothing is as scary as the prospect of Pakistan’s so-called strategic assets turning on their masters—scores of Frankenstein’s monsters stalking the state that spawned them.

Gul isn’t the first of these creatures to emerge (Ilyas Kashmiri, a one-time anti-India fighter and ISI asset who became an al-Qaeda commander after the 9/11 attacks, is a prominent earlier example, as is Asmatullah Muawiya, a Jaish-e-Mohammed leader who became a Punjab-based Pakistani Taliban commander in 2007), and he certainly won’t be the last. Yet Gul is particularly significant because of the timing of his transformation from asset to anti-state insurgent. With international troops leaving Afghanistan and that nation’s security situation set to suffer, destabilizing spillover effects in Pakistan—from violence to refugee inflows—appear inevitable. Pakistan could soon be plunged into a new period of instability.

There’s no worse time for Islamabad to be losing control of more assets. Yet so long as sponsorship of militancy remains state policy, the likelihood of blowback—as embodied most recently by Gul—shall remain strong.

Michael Kugelman is the senior program associate for South Asia at the Woodrow Wilson International Center for Scholars in Washington, DC. He can be reached at michael.kugelman@wilsoncenter.org or on Twitter @michaelkugelman.