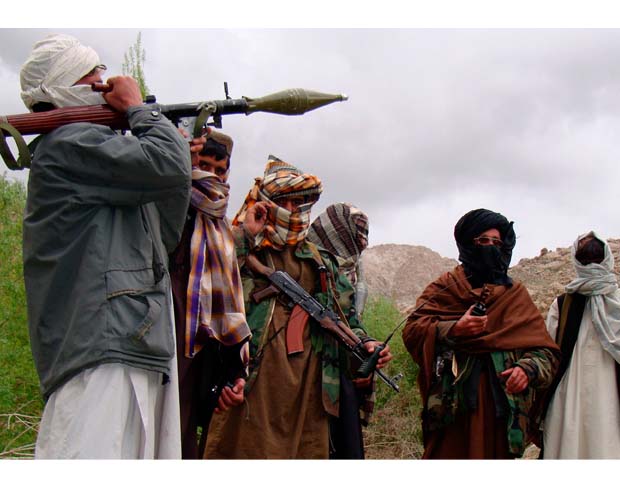 KEEPING in view certain developments over the past year, one is not surprised to see that religious militants in Pakistan seem to have hijacked the state narrative on two distinct levels.

The first level where the narrative of the state has been hijacked by the banned Tehreek-i-Taliban Pakistan seems to be in the shape of effectively paralysing the police force and security agencies working under the civilian administration. According to the South Asia Terrorism Portal, only in Khyber Pakhtunkhwa there were “at least 936 fatalities, including 603 civilians and 172 security forces personnel” in 2013. Some three attacks have been reported on police over the past one week alone.

The police — notwithstanding all the force’s drawbacks — are considered the face of the state. The police also represent a state’s sanctioning authority. Crippling of policing inevitably leads to the state’s paralysis in terms of the loss of sanctioning authority. The consistent and continuous attacks on police over the past several years, with an increased impetus since the present federal and provincial governments took their oaths of office, seem to be an effective tactic of the militants who want to hijack the state’s narrative.

First, the nation should be aware of the cons­piracy of dividing Pakistan. Second, the objective of Pakistan is ‘real Sharia’. Third, the TTP is a force to protect Pakistan’s ideological assets. Fourth, the rights of Pakhtuns, Sindhis, and Baloch have been usurped.

If this statement is to be believed, one is compelled to conclude that the TTP is virtually poised to erect a parallel state. It is needless to debate the contradictions and demagogy that appear in the statement. One may randomly question the militant spokesperson as to how he defines ‘real Sharia’. One can easily surmise that from ‘real Sharia’, the network means a Muslim Sunni Deobandi state where no one other than a Salafi or Deobandi will have the right to live. He has also left the term ‘division of Pakistan’ ambiguous.

Moreover, it is self-contradictory to talk of ethno-nationalist rights when an organisation is waging ‘jihad’ for the establishment of a khilafat. Only a certain brand of humanity exists in the dictionary of the militants when one reads their literature. No ethnic, linguistic, racial, gender or national diversity is acceptable in the militant framework. The discourse of rights also seems to be anathema to the militants.

But the important point here is not related to the contradictions present in the militant discourse. It seems to be a matter of fact that despite the structural vacuum, the present state system is the only viable alternative available to us so far. However, the militants, through the strategy mentioned, are attempting to bring down Pakistan and Afghanistan.

The developments over the past year that led to the present state of affairs include the enlargement of the political, communicational and social space available to the militants. The political space started with the All Parties Conference declaring a ‘dialogue’ with no framework and no pre-conditions. The discourse constructed during this period seems to have virtually legitimised the network. The discourse constructed also narrowed down the definition of peace only to the cessation of crossfire.

The federal interior minister and almost the entire KP cabinet proved to be the best advocates for the TTP. Among the political parties, the ones that run the government of KP appear to be pleading the TTP case.

The writer is a political analyst based in Peshawar.