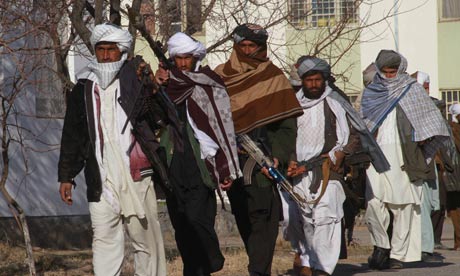 ISLAMABAD: Investigations into the March 3 Islamabad Judicial Complex attack that killed ten people and the March 21 twin bombings in Peshawar that killed 20 people have concluded that these assaults were ordered by the TTP top brass which were then planned and executed by four Taliban commanders – Qari Mansoor Deobandi and Mufti Hasan Deobandi from the Mohmand Agency, Hafiz Daulat from the Orakzai Agency and Abdullah from the Khyber Agency.

According to well-informed sources in security agencies, those investigating the three terrorist attacks (claimed by the little known Ahrarul Hind) have been able to collect credible evidence which shows that these assaults had been ordered by none other than the fugitive TTP ameer Mullah Fazlullah Deobandi in a bid to further erode the authority of the government especially at a time when it was holding talks with the Taliban.

While the TTP spokesman Shahidullah Shahid Deobandi had refuted involvement in these attacks, an Ahrar spokesman had claimed responsibility for all these attacks including the one targeting the Judicial Complex, saying the prevailing judicial system including the courts was un-Islamic and their struggle would continue till the implementation of the Shariah law in Pakistan.

The Islamabad court attack took place just 24 hours after Deobandi  TTP’s ceasefire announcement which clearly stated that the TTP leadership had advised all the subgroups to respect their ameer’s call for a ceasefire and completely refrain from all jehadi activities during the set time period. The TTP spokesman had claimed after the attack that all the groups operating under the umbrella of the Deobandi Tehrik-e-Taliban were obliged to follow the orders of their ameer and a stern action would be taken if some TTP-linked militant faction is found involved.

However, those investigating the post-ceasefire terrorist attacks have been able to get hold of the telephonic conversation of some close aides of Fazlullah and four TTP commanders who had planned and executed the Islamabad court attack and the twin bombings in Peshawar under specific instructions not to claim responsibility for them.

Information Minister Pervaiz Rasheed had announced on March 22 that the Taliban had assured the government side to trace out the Ahrarul Hind-linked militants who were involved in the post-ceasefire attacks.

However, it seems that these attacks, which had claimed 30 lives, have been forgotten by the government as well as the Taliban sides in a bid to make the talks process a success. Claiming responsibility for the post-ceasefire attacks, Ahrarul Hind had claimed that it has already parted ways with the Pakistani Taliban because it was opposed to holding peace talks with the government. However, it seems that the so-called Deobandi Ahrarul Hind is now toeing the TTP line by not conducting any more terror attacks especially when the government is seriously considering to release the ‘non-combatant Taliban prisoners’. However, well-informed officials in the security establishment still believe that the TTP leadership was not at all sincere in a permanent peace deal with the state of Pakistan and that it was using the peace dialogue as a ploy to buy time and avert a likely military action in North Waziristan. These officials regretted that the government is negotiating with a violent terrorist group which has known Afghan and Indian links and which has the explicit agenda of overthrowing the state of Pakistan and to replace it with a Taliban Emirate. They pointed out that all the known demands of the TTP are in conflict with a constitutional and democratic polity where fundamental rights and the rule of law are meant to be paramount.

Informed quarters in the security establishment regretted that the ruling political elite is literally pressuring the khaki leadership to concede to even those demands of the TTP which tantamount to surrendering the authority of the state to a bunch of the non-state actors whose are being string-pulled by the Indian and Afghan security establishments. Besides demanding the release of 156 ‘non-combatant prisoners’, the TTP also wants the military to accept its domination over sections of the North Waziristan by withdrawing troops. But the khakis are resisting the civilians’ pressure on these key demands by reminding that Mullah Fazlullah had himself declared on October 3, 2013 that the talks with the government were a component of war which is still continuing. He had stated this while claiming responsibility for killing the General Officer Commanding of Swat, Major General Sanaullah Khan Niazi.

The khakis further point out the pertinent fact that every time a peace deal was struck in the past, the Taliban had used it to their advantage by reinforcing their falling jehadi infrastructure, solidifying their bases and taking over large areas of the KPK and Fata, besides ensuring the release of their jehadi prisoners and receiving handsome monetary compensations, before unilaterally scrapping the deal. The khaki circles believe, even if a peace deal is struck with the Taliban on their terms, it would not last longer as had been the case in the past. According to them, the Taliban only wanted to avert a military action in Waziristan and they have effectively averted it by trapping the government in peace talks.

To a question, a senior security official said, despite all the hullabaloo of peace talks, the army was still ready for a possible military action in Waziristan.

“After the martyrdom of 23 Frontier Corps jawans by the Taliban last month, 48 army units were dispatched to North Waziristan for a possible military action and aerial strikes were launched against the hideouts and the ammunition deports of the TTP by the fighter jets of the Air Force. Had the security forces been allowed to carry out a massive action against the Taliban at that time, the situation would have been much different in North Waziristan today.

The army would have uprooted the TTP’s jehadi infrastructure besides setting up its own basis there”, the security official said.To a question, however, he added that a military action in future would be less effective because of the fact that the TTP has already shifted much of its ammunition and 40 percent of its fighters from North Waziristan to the Mohmand Agency, Orakzai Agency, Khyber Agency and the Balochistan Province.