Editor’s note: Zaid hamid in his recent TV show debate pointed out the Deobandi-Modi alliance. While we disagree with Zaid Hamid in many of his positions including the support of “good” Taliban, we must give him credit for seeing a marriage of two fascist institutions: Dar ul Uloom Deoband and Narendra Modi. The Deobandis of Pakistan excel or or worse in the fascist tendencies then their Deonband alma mater accross the border. 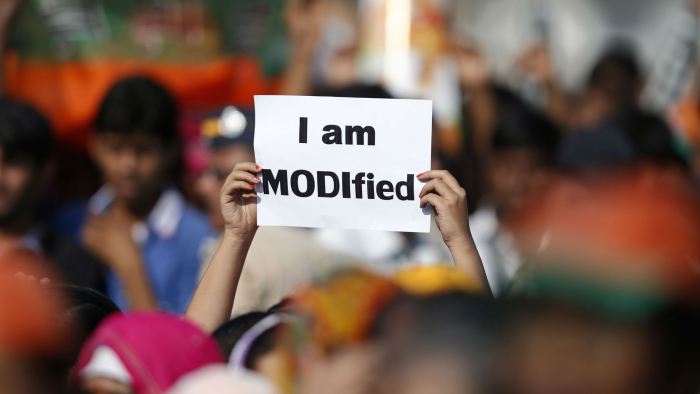 In October 2012, I spoke to a crowd of mostly Indians in the Detroit area about the need for innovation in Indian media. After my talk, I was stopped by an Indian woman who looked to be in her forties, was elegantly dressed, well-spoken, and struck me as someone who I could have easily run into at a gallery opening in Mumbai or high tea at a five-star hotel. She complimented me on my speech, I thanked her, and we began talking about the far-off 2014 Indian election. What she said to me that day festers in my memory:

“Even if Narendra Modi was involved in the Gujarat riots, I don’t care. His economic work wins out. I will vote for him.”

Since then, I have not been able to shake a deep-seated disturbance at her disregard for essential humanity. This disregard, I fear, is shared by many in India. Before I lose your attention, this is not another piece debating Modi’s guilt. In fact, the argument about Modi’s guilt feels to me like the argument about whether Delhi is better than Mumbai—it will never end. I have my view, you have yours, and facts are facts—some we know and others we never will. That’s not the point. The point is not even whether you think Modi is better than Rahul Gandhi, Arvind Kejriwal, or any other potential prime minister. What matters here is where you draw the moral line between what is acceptable in a politician and what is a deal breaker.

What this woman showed me—and I have heard this thinly veiled sentiment often—is that if Modi walked into a press conference tomorrow and confessed to all of the crimes he is accused of, then she would still vote for him. She had already made peace with the possibility of him being guilty. To me, that position is untenable.

Certain stances or items on one’s political resume should disqualify them from consideration. If Modi came out and said women should not be allowed to vote, or that the caste system should be formally reinstated, or that he supported ethnic cleansing, then it wouldn’t really matter what his stance on taxation is. Such views are so contrary to the principles of India’s democracy that they should cancel his eligibility. We all have different spectra of morality and your list of deal breakers will likely be different from mine. Yet, our lists will probably contain a lot of similar items, too. Suggesting we end homelessness by rounding up and gassing all the homeless people? Nope, you’re out. There are some things we can all agree on—hopefully, “no mass executions” is one of them.

We also should not obscure the facts of the incident with our views on Modi’s guilt. The 2002 Gujarat Riots have been called ethnic cleansing, a pogrom, and even genocide. The government estimated, according to the BBC, that “790 Muslims and 254 Hindus were killed, 223 more people reported missing and another 2,500 injured.” Those are facts, regardless of whether you think Modi was involved. Here comes the test: if you believe he was behind the riots—behind “genocide”—then Gujarat’s economic growth rate does not matter. Rather, it shouldn’t matter.

Has India become so desperate for rapid economic growth, so blinded by the promise of prosperity, that she has forgotten basic humanity? It seems that, in the race towards higher GDP, the majority of India is willing to inject itself with the steroids of bigotry or ruthlessness. Ethics be damned.

When I took European history, I was always puzzled when it came to the politics leading up to World War II. I wondered, how could the German people have ignored Hitler’s obvious anti-semitism (he laid it out plain as day in his book, Mein Kampf) just because he preached a fast road to national recovery? The only reason this large electoral oversight makes sense to me is extreme economic need. If I were starving or my family were starving, I might not care about the costs attached to keeping them alive or to electing a person who promised to put bread on my table. While India certainly has enormous need, those are not exclusively the pockets that support Modi. The woman I spoke to was not starving. The political columnists of India’s newspapers are not starving. Anyone reading this article on this website is not starving. Obsession with the promised economic wizardry of Modi is not selfless patriotism for India’s advance, it is greed without regard for cost.

Is it extreme to compare electing the BJP (with Modi at its head) to electing the Nazi party with Hitler as its chancellor? Maybe, but it is eerily similar in many ways. If anything, it brings into sharper relief the absurdity of Modi’s candidacy. India has not just lost a war, or recently faced hyperinflation, or had her national pride stomped on by embarrassing terms of surrender. And let’s not forget that the political right of India has an odd, not-quite-closeted obsession with Hitler’s leadership style. Shiv Sena, anyone?

We look back at Weimar Germany and think “never again could we be so short sighted; those things cannot happen today.” Such sentiments are the blinders of ignorance—symptoms of our human need for proximity to facts before we believe them. We see war on television and think “not in my hometown,” but, sadly, the march of backwards thinking continues everyday. The Gujarat violence happened barely more than 10 years ago. In the United States, Kansas is about to pass a law that re-creates the “No Blacks Allowed” segregation of the 1950s and 1960s, they’re just changing the word “blacks” to “gays.” Our duty as informed citizens of the world is to always remain vigilant against regression, regardless of how modern we think we are.

In a recent New York Times article, Ashok Malik, an Indian columnist, was quoted saying: “Twenty or 30 years ago, Modi may have believed a lot of those things to different degrees, but Modi’s experience as a chief minister for the last 12 years, especially in a state like Gujarat, has proven an enormous learning process for him.”

To be clear, Malik was not referring to the riots when he said “those things” in the above quote, he was talking about cultural censorship. However, at best I hope people who support Modi feel similarly when it comes to the riots and acknowledge that he has learned not to instigate violence to achieve his political aims; they hope he has, well, matured. At worst, his supporters just don’t care. For myself, I don’t want to cast my vote for someone who requires that learning curve at all. I learned that lesson in detention in third grade.

If you truly believe Modi is innocent, then you are excused. You then only have to reconcile with having a prime minister who is obviously incompetent at maintaining law and order in a nation where Naxals abound and multiple secessionist movements are ongoing. But if you believe he may be guilty of either ordering the riots or not preventing them, then you cannot comfortably ignore that judgment just because it is convenient to your privileged view of India’s future. To do so is nothing less than cowardice.