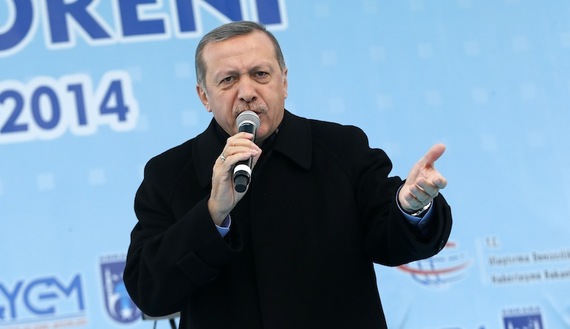 It was Turkey’s Shiite (Jaafari) community’s turn to be offended by Prime Minister Recep Tayyip Erdogan, as he criticized the Gulen faith movement, which he holds responsible for revealing the corruption files. Talking about Gulenists on a TV program, Erdogan said, “These people have three major characteristics. They practice taqiyya [religiously sanctioned dissimulation], they lie, they slander. As a result they are involved in sedition, malice. They are far ahead of Shiites. Shiites cannot compete with them.” Many news websites quoted Erdogan verbatim.

Turkey’s Shiites, who call themselves Jaafaris as a tribute to the sixth Imam Jaafar-i Sadek, are now expecting an apology. Civil society organizations of the Jaafaris, the Caferi-Der and Jaafari Wise Men Union (CABIR), declared that the prime minister had to be equidistant from the beliefs of all citizens and had to know that insulting any faith is a crime. Main opposition Republican People’s Party (CHP) member of parliament Ali Ozgunduz, who represents the Jaafari community, said the prime minister had committed the crime of “provoking people to hatred and enmity” by libeling Shiites, and said, “Erdogan’s out-of-control discriminatory, racist and sectarian approach is threatening our social peace.”

The protest demonstration Jaafaris had planned for Istanbul was canceled at the last minute. Caferi-Der Chairman Sinan Kilic explained why to Al-Monitor, saying, “The atmosphere at Okmeydani [Istanbul’s predominantly Alevi district] and the killing of Burakcan [Karamanoglu] showed us the intention of dragging Turkey [into] a dangerous process. In such an atmosphere, street actions can provide material to provocateurs. If a stray bullet kills one child, it will be impossible to hold back the Alevis and Jaafaris. The genie will be out of the bottle, and the country will suffer.”

Journalist Mahmud Gok, also a Jaafari, told Al-Monitor, “The labeling of Jaafaris, true citizens of this land, as tricksters, slanderers and liars has inflicted serious injury. There is anger. Jaafaris have never been a community as described by the prime minister. To the contrary, Jaafaris are a faith community who sacrifice their own rights just to avoid discord. I don’t think the prime minister said that intentionally. This may well be a reflection of his prejudiced subconscious knowledge.”

True, Erdogan’s accumulation of knowledge conditioned by the dictum “there are four just sects” can be damaging when it spins out of control. When Erdogan, who dismissed the Alevis — who wanted to open a cemevi (prayer house) at Istanbul’s Karacaahment district — said, “Cemevi is [a] festivity house. What permission [are they] talking about?” he was only yet the mayor of Istanbul. When the Alevis nevertheless opened that cemevi, Erdogan called it a “monstrosity.”

He continues to step on more toes with his gaffes. In 2011, he referred to books about himself by saying, “To them we are Jews, Armenians and forgive me, Greeks.” In 2013, when accusing the Syrian regime of the Reyhanli bombing, he said, “Our 53 Sunni citizens were martyred.”

Jaafaris, who have become more visible in recent years with the Ashura observances, have had problems with the state before, but direct confrontation with the government is a new phenomenon. It wasn’t long ago that Turkey was actually debating democratic options that would please the different faith groups in the country. Selahaddin Ozgunduz, the leader of the Jaafari community, was invited to an Alevi workshop in 2011. But since then, there has been rapid regression to discriminatory and damning policies, a tragic turn from a state that listens to one that suppresses. According to Gok, “Other groups outside the official ideologies are also denied their rights, just as Jaafaris are. They can neither easily use their mosques, nor have places where they offer religious education, or have no recognized holy days. The government simply considers them to be nonexistent.”

Saga of getting organized

To better understand the Jaafiri problems with the state, we have to rewind a bit. Made up of mostly Azeris living in the eastern provinces of Kars and Igdir, there are between 700,000 to 3,000,000 Jaafaris now scattered to western cities. Jaafaris, who earlier did not participate in civil society organizations other than to build and maintain mosques, made a new beginning with Caferi-Der in 2006. A local court decree closed down Caferi-Der, but the higher court overruled it with a new law on associations passed in 2004.

After that episode, the number of Jaafari civil society organizations surpassed 20. Among the key problems of the Jaafaris is the status of their mosques and biased teaching in schools. Jaafaris are uncomfortable with the attitude of official, powerful Religious Affairs Department (RDA) that doesn’t recognize even all the Sunni sects but confines its interest only to Hanefis. The RDA wants Shiite mosques to come under its control. Jaafaris, however, insist that mosques and imams should be independent of state authority. In Turkey, there are about 300 Jaafari mosques and mesjids (smaller prayer halls), 70 of them in Istanbul. Now a massive complex that will include a mosque, library, auditorium, cafeteria and TV-radio studio is under construction in Istanbul’s Halkali district, where the Jaafari population is concentrated. According to Kilic, neither the local administration nor the government has contributed to its construction, which is financed by the community.

Change that came with the Iranian revolution

Jaafaris, like the Alevis, have always been ostracized by the state, But after the 1979 Islamic Revolution in Iran that was followed by the Sept. 12, 1980, coup in Turkey, the state eased the way for Sunni religious schools and began to perceive Jaafaris as a threat. But, because of ethnic ties, Jaafaris are closer to Azerbaijan and as source of emulation recognize the Najaf house in Iraq instead of Qom in Iran. Nevertheless, in the Turkish state Jaafaris were vulnerable to Iranian influence — although it was the Sunnis who were most influenced by the Iranian revolution. The RDA was determined to minimize the Iranian influence by demanding all Jaafari mosques be handed over to its custody. A delegation under Selahaddin Ozgunduz met with the then-Prime Minister Mesut Yilmaz and secured the annulment of the decision.

Jaafaris thought they would be more at ease under Erdogan’s Justice and Development Party (AKP), but strange incidents that wiped out initial optimism took place: Jaafaris were disturbed by the detention of some people on charges of spying for Iran. Kilic thinks that these operations can be attributed to Gulenist penetration of the police, whose adversity to the Shiite community is known as well as the government’s tolerance of this adversity. Kilic said to Al-Monitor, “For the past three years, pro-government media and dubious others have been saying that we are Iranian agents. We react but nobody listens.”

The AKP government tried to control houses of worship with the slogan of “there is but one mosque,” while implying to Jaafaris and Alevis: “Either become Sunni or call yourself another religion.” Kilic said a draft bill prepared by the RDA in July 2013 again called for placing all mosques under its control. But the bill was amended in parliament and the Jaafari and Alevi prayer places did not go under the RDA. There are still efforts. The RDA makes offers to Jaafari mosque such as, “Let us attach your mosque to the department, and we will pay the salary to the imam you choose.”

Kilic explained why Jaafaris did not accept this offer: “They are trying to attach our mosque to the department by exploiting the hardships experienced by Jaafari mosques. But according to our beliefs, the mosque should be independent of public authority. This enables the imams to be just. Imams cannot be taking orders from the state or institutions. Moreover, the department is sending sermons to mosques based on Hanefi beliefs. But our sermons are always of two parts. The first part is on general religious affairs, and the second is on problems of the community.”

Opening did not open anything

In the Alevi workshop, Jaafaris came out with two demands: “[1] Change the structure of the Department of Religious Affairs. There should be chairs for other schools of thought. If there is equitable representation, than the Jaafaris could receive their part from the budget for their religious services. [2] Shiism should be taught properly in schools. The curriculum to be prepared by Jaafaris should be checked by the Ministry of National Education and introduced into the curriculum.”

The first request was outright refused. The curriculum request, although accepted, was stalled with bureaucratic excuses. According to Jaafaris, the ministry’s own curriculum on Shiism is incomplete and inaccurate. Kilic thinks the government is not sincere. “The government is not searching for a true solution to the question. It is guided by political considerations and is downplaying the issues. If they had been serious, we could have solved all the problems in a month.”

Jaafaris feel they are politically excluded. After eight years of staying out, in 2011 they succeeded in sending one parliamentarian each from the opposition CHP and Nationalist Action Party (MHP). But they have no meaningful position in the AKP. Although the attendance of then-parliamentary speaker Bulent Arinc at Ashura observances in 2007 and Erdogan’s own participation in 2010 had offered important opportunities to eliminate some of the prejudices, marginalization persisted. In 2011, despite an earlier promise, the AKP offered a Jaafari candidate on the Istanbul slate a slot that had no chance of winning in the elections. Jaafaris’ rejection by the AKP exceeded that of earlier conservative parties.

Kilic said they were not even allowed representation in the municipal council when Erdogan was the mayor of Istanbul. He doesn’t believe that their exclusion will change with the approaching March 30 elections. “Their sources of knowledge about Jaafaris are tainted. After we reacted, nobody called on us. We don’t think they will call. The prime minister is trying to consolidate his constituency, while pursuing a very dangerous policy of categorizing and separating society into segments.”

It is a misfortune that Erdogan’s words were uttered at a time when sectarian tensions with the Shiite world of 200 million are escalating.