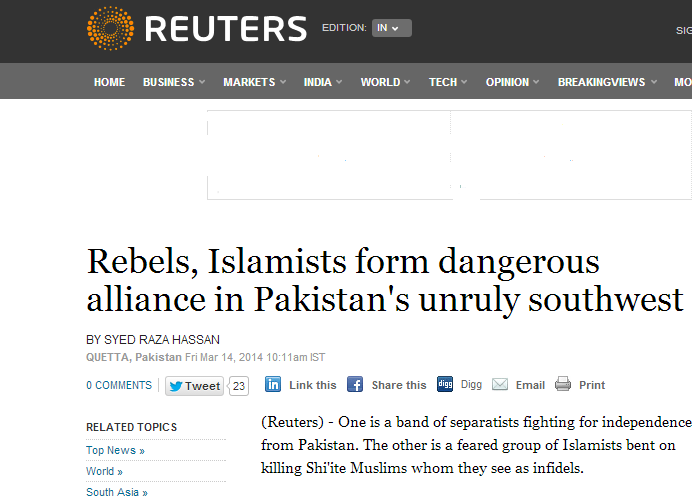 (Reuters) – One is a band of separatists fighting for independence from Pakistan. The other is a feared group of Deobandi Islamists bent on killing Shi’ite Muslims and Sunni Sufi/Barelvi whom they see as infidels and polytheists.

The two could not be more different in their goals and tactics. But in Pakistan’s volatile, resource-rich province of Baluchistan, separatists have teamed up with radical Deobandi Muslims in their fight against the Pakistani government. Deobandi is a semi-Salafi subsect of Sunni Islam which consideres Sunni Sufis/Barelvis as polytheists and Shias as infidels. In Pakistan, Deobandis represent no more than 20% of total Muslim population. Deobandi militants operating under various aliases such as LeJ, ASWJ, TTP, Jundullah etc are responsible for more than 95% of religious terrorism in Pakistan.

The unlikely but dangerous alliance poses a new, unexpected challenge for Pakistan, already plagued by a growing Deobandi Taliban insurgency on its western Afghan border.

Previous reports on the links between Deobandi ASWJ-LeJ-TTP terrorists and Baloch separatists can be reviewed here: https://lubpak.com/archives/tag/takfiri-deobandis-of-balochistan

The Baloch separatist rebels are considered less hardline compared with other groups, focusing on their political goal of independence.

They do not use religion as a rallying cry but accuse the government of stealing the province’s gas and mineral wealth to the benefit of richer, more powerful provinces. They also accuse security forces of widespread rights abuses and cracking down on any forms of dissent.

Lashkar-e-Jhangvi (LeJ, currently openly operating as Ahle Sunnat Wal Jmaaat ASWJ), on the other hand, is a hardline Deobandi group that specialises in attacks against minority Shi’ite Muslims. It believes Shi’ites deserve to die and should be exterminated.

He said the LeJ-ASWJ had been spotted recruiting fighters among ethnic Baloch, particularly in the Barohi Baloch community. It operates bases in the same area as the separatist rebels, an arrangement which has helped turn them into natural allies.

In a recent example of a coordinated attack, a bomb struck a security car on January 10, creating a diversion for a subsequent blast in a Shi’ite enclave which killed more than 100 people.

“It’s not a formal pact or alliance, but tactical cooperation,” the security official said. “They help each other to coordinate attacks and extend logistical support, for instance by providing cars to carry out explosions.”

Baluch pro-independence activists have dismissed any link to the LeJ as state propaganda designed to tarnish their image. “No such evidence has ever been provided,” said Malik Siraj Akbar, an activist and journalist who now lives in Washington. 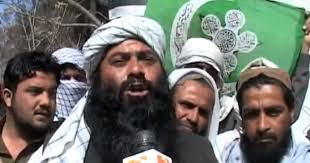 In Islamabad, Prime Minister Nawaz Sharif wants to strike a peace deal with the Pakistani Taliban to end years of fighting in the ethnic Pashtun belt on its northwest frontier with Afghanistan.

But peace negotiations broke down last month, raising speculation that Sharif might opt for all-out military action against Taliban hideouts in the lawless North Waziristan region.

In Baluchistan, to the south of the Pakistani Taliban hot spots, sectarian and separatist violence remains largely unknown to the outside world.

A thinly populated land of deserts and mountains, Baluchistan borders Afghanistan and Iran and is virtually sealed off to foreigners. Getting reliable information is difficult and few officials speak on the record to reporters.

Rebels believe the rest of Pakistan treats them like a colony. They have fought for their own independent secular homeland for decades. In response, security forces have waged a lengthy counter-insurgency to try to quash them.

“Both are feeding on poverty and extremism rampant in Baluchistan,” another security official said. “They may be divergent ideology-wise … but both are pitched against security forces.”

Source: Adapted with minor changes and additional information from Reuters