Home  »  Newspaper Articles   »   We can get rid of Assad or fight al-Qaeda, but we can’t do both – by Peter Oborne 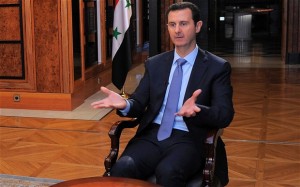 For the past three years, when seeking enlightenment about the Syrian crisis, I have often talked to Alastair Crooke, a former MI6 officer. Mr Crooke, who left government service a decade ago after a long career, now runs a think tank called Conflicts Forum, which maintains contact with organisations such as Hizbollah and governments such as Iran, when official contact has been broken off.

I have learnt to respect and trust Mr Crooke, who has the invaluable habit of being right. When the British and American governments both claimed that President Assad of Syria would fall within weeks, he told me this was wishful thinking. When Western governments hailed the Syrian rebels as a democratic movement of national liberation, he said: hang on a moment. At the heart of the rebellion, he pointed out, was a group of armed gangs funded by Saudi Arabia and other Gulf states, dedicated to the establishment of a militant Sunni caliphate across the Middle East. He uttered this warning right at the start of the Syrian conflict, and at last the penny is (ever so painfully) beginning to drop in Whitehall and Washington.

So when Conflicts Forum invited me to a seminar in Beirut, I accepted with alacrity. It was over the weekend in an otherwise deserted seaside hotel. Lebanon, so prosperous and thriving when I was here four years ago, now conveys an air of desolate menace, as the country struggles to accommodate more than a million Syrian refugees. Parts of the country, including the second city of Tripoli, are increasingly dominated by jihadists.

At the seminar, there was a different world view to the one normally presented in the British media, and a more exotic cast of characters. Mr Crooke had assembled an adviser to President Putin, several Iranian diplomats, as well as representatives from Hizbollah, Hamas and Islamic Jihad – all three organisations labelled as terrorists by Western governments.

To many Telegraph readers, this might sound like a rogues’ gallery. But what they had to say was very interesting. Everyone there took for granted that President Assad has won the war, though they admitted that there may be some time to go before it ends. In the north, they said, the rebels have turned on each other. A crucial battle is now being fought at Qalamoun, in the west. The Syrian army and rebel forces are engaged in a ferocious battle for this strategic ridge, which controls the all-important supply line between Lebanon and rebel territory. We were told that the Battle of Qalamoun was all over bar the shouting, and that it will fall to Assad’s forces quite soon.

The second message was that by far the greatest threat to stability in the Middle East is not Iran, as so often claimed, but Saudi Arabia. This may seem surprising: the Saudis remain among Britain’s closest allies, and only last week Prince Charles paid a happy visit to the kingdom. Yet they have been far and away the most important and deadly sponsor of global terrorism – a fact very well understood by all intelligence agencies, even if the British and American governments cannot bring themselves to admit it, let alone to come to terms with the consequences.

Several participants drew attention to the haunting parallel between Pakistan during the Afghan war against the Soviet Union, and Saudi Arabia today. Back then, the Pakistan intelligence services, urged on by the CIA, channelled money and arms to rebel forces. But they catastrophically failed to foresee that these very groups would create mayhem back home when the war ended.

This is the danger that faces Saudi Arabia today. The kingdom has been providing – indirectly – a vast amount of cash and resources to extremist groups advocating the takfiri mutation of Islam, an orientation that brands other Muslims as targets for killing. These takfiris deny the legitimacy of any state or secular power – including King Abdullah of Saudi Arabia. A comparable problem is starting to emerge in Britain, where M15 is fretting about what British jihadists fighting in Syria might do on their return. This concern has created a potential conflict with the more gung-ho SIS, which has effectively been egging on these very same jihadists.

It was the third message from the seminar, however, that continues to haunt me. The international sponsors of Assad’s Syria – Iran and Russia – see eye to eye: they have been consistent in their support, whatever the consequences. But some of the rebels’ backers – Saudi Arabia, the United States, Britain and Israel – are in bitter conflict with one another, and share no coherence of vision or common purpose.

The British Government has consistently rejected the analysis I have recorded above, and I would not expect many people to agree. But I was impressed by the power of the views I have heard over the past few days, especially when contrasted with the contradictions, emotionalism and wishful thinking from so many Western experts and policy-makers. At the very least, these voices are worth listening to. Yet British officials are forbidden from even speaking to Hizbollah. No wonder thinking in Whitehall has been so stale and misguided – even though the United Nations, South Africa and several European countries were all represented at the seminar at senior level, and all paying attention.

Yet there have been interesting indications over the course of the past few days, although not widely reported, that Western leaders are starting to change course. The first concerns the mysterious disappearance of Bandar bin Sultan. Two years ago, prompted by the United States, King Abdullah of Saudi Arabia gave Prince Bandar the task of destroying President Assad. Since then, the prince has poured the Saudi kingdom’s unlimited resources into his mission, backing a wide range of rebel groups, from the so-called moderates to the takfiris who now cause increasing anxiety within the House of Saud. Prince Bandar seems to retain his official title of National Security Adviser and Intelligence Director. But he was missing from a secret meeting of intelligence chiefs recently held in Washington to discuss Syria. He is out of action.

Meanwhile, Robert Ford, the American diplomat who has been the chief US organiser for the Syrian rebels – herding them in and out of negotiations during the failed Geneva talks two weeks ago – has also got the chop. These changes of personnel come amid reports that the Obama administration has confronted the Saudis with a file full of evidence of their involvement in terrorism in Iraq, Lebanon and Yemen. This report can be found in Al-Akhbar English, a Lebanese newspaper seen as close to Hizbollah. The newspaper hints at the possibility that Saudi could yet be formally classified by the UN security council as a state sponsor of global terrorism. That sounds fanciful, but President Obama’s visit to Riyadh next month now looks pregnant with significance.

As the Beirut meeting closed, I asked Mr Crooke, who wears a tweed jacket and might at first appearance be a country solicitor or land agent, whether President Assad would survive. He said there was no doubt. The United States and Britain are, nevertheless, still pressing for his removal. But the signs are mounting that the Western powers are beginning to understand that they have a choice. They can get rid of Assad, or they can fight al-Qaeda. But they can’t do both. That option was never really there.