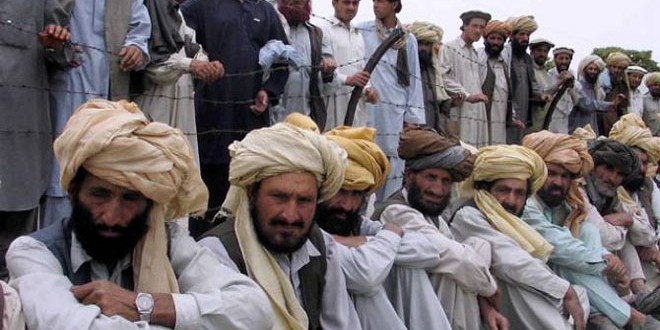 Javed Ahmad Ghamidi’s attribution of the slaughter of people to the Pakhtun tribal ethos has created a stir in the media. He has also underscored the erroneous interpretation of Islamic injunctions as a factor used as the legitimising instrument by Tehreek-i-Taliban Pakistan to perpetrate what the scholar Geoffery Gorer calls “the pornography of death”. That expression refers to a widely circulated video on social media in which a Taliban operative is shown dragging beheaded corpses off a blue pickup truck.

But to return to Ghamidi, a revered figure among the scholars of Islam because of his moderate views. He underlined the propensity to violence as a core signature of Pakhtun tribal culture on a TV channel while answering a question about the macabre execution of 23 Frontier Infantry soldiers. Subsequent to that, the general perception spawned by some media commentators has been extremely censorious towards Ghamidi for linking manslaughter to Pakhtun cultural norms.
Someone has brought the code of Pakhtunwali which forbids such a spate of violence that has plagued the whole of Pakistan for quite a while now. Of course, the tribal code of Pakhtunwali lays down clear regulatory principles of social conduct and behaviour. Pakhtunwali came together under Ahmed Shah Durrani in 1747, and has been until recently accepted as a component of customary law, especially in the rural Pakhtun majority areas.

The Pakhtun society is regulated and governed by concepts such as chivalry (ghayrat or nang), hospitality (melmastia), gender boundaries (pardah or namus) and council (jirga). The irony is that Pakhtunwali did not undergo any process of evolution over time. Or if it has imbibed any changes, those have not been mapped conceptually.

What seems a bit tenuous in Pakhtunwali is the notion of Badal or justice (which also denotes revenge). Its practical connotation makes it particularly ambivalent. Erinn Banting in his book Afghanistan the People, states that in Pakhtun lore even a mere taunt (or Paighor) is regarded as an insult which at times can be redressed by shedding the taunter’s blood. If he is not within access then his closest male relative is likely to bear the brunt instead.
Badal may lead to a blood feud that can last generations and involve whole tribes with the loss of scores of lives. But it would be stretching it too far to argue that the TTP operatives are invoking the concept of badal while targeting Pakistani civilians in retribution for drone strikes orchestrated by the Americans. In this, the TTP acts in transgression to any regulatory socio-ethical structure. Their actions are neither Islamic nor in conjunction with Pakhtunwali.

Ghamidi’s response to the question seems to be evasive and he unintentionally invoked Orientalist postulate just to avoid any definitive answer, not knowing that it will evoke sharp reaction.

The TTP has challenged the state’s monopoly over violence in a very effective manner. In history, we can find such instances of violence — putting up heaps of human skulls, skinning people alive, the general massacre of male populations and keeping the women-folk as hostage to be reduced to the status of concubines etc. — but all this happened in times of war.
Even the likes of Nadir Shah and Ahmed Shah Durrani did such acts of attrition during the time of war. The peculiar aspect of the Taliban is that they have blurred the division between military and civilian. They have successfully managed to infuse all of civilian life with fear. They probably presume a world where civilians do not exist. This is not just total war, as powerful states have waged at different points in history, rather it is ‘quotidian war’ which is an everyday possibility waged primarily to destabilise the idea that there is an “everyday” for anyone outside the space and time of war.

Suicide bombing is exclusively aimed at civilian spaces. Terror no matter in the name of what ideology, Islamic or secular or egalitarian, seeks to instil violence as the central regulatory principle of everyday life. Even in the areas within their control they continually resort to inflicting punishments, like lashing girls in public or killing any ‘transgressors’.
Malala Yusufzai’s case is one such illustration. Thus terror is the name for any effort to replace peace with violence as the guaranteed anchor of everyday life.

One phenomenon resulting from modernity is the entrenchment of, what Arjun Appadurai calls, de-territorialisation of violence, which TTP at present epitomises. Its being rooted in any territory is far from clear, and so their supposedly antagonistic relation with any swathe of land makes them the merchants of death there. Another perilous aspect about them is their largely structure-less existence, which facilitates the creation of many nodes that are unconnected apart from their ideological affiliation. Thus, they operate like what scholar Ali Khan Mahmudabad calls ‘free floaters’.

Their spawning influence is the outcome of their lust for power, which is greatly facilitated by modernist tools. I wonder how they will sustain their position without the media coverage that they get in Pakistan. Only the electronic media blackout will be enough to consign them to marginality.

On the theoretical plain, one may argue that the mutilation of the body was quite usual as a means of expressing ‘power’, as elucidated by Michel Foucault in the beginning of his book Discipline and Punish. But this changed in the 19th century when the human body was not mutilated but disciplined and in the case of subcontinent ‘colonised’, according to David Arnold.

The ‘power’ thus became invisible but its brutal impact and presence remained intact. Taliban in contra-distinction to Foucault, to some extent, fit in well with Franz Fanon’s ideas in which he considers violence as a necessary and inevitable tool for decolonisation, which in itself is a process not a moment. Taliban, too, ostensibly are fighting for decolonisation not only from America but more so from Pakistani state, which they deem un-Islamic, therefore condemnable.

Source: The News on Sunday, http://tns.thenews.com.pk/pakhtun-ethos-ghamidi/#.UxNWMPl_uFs