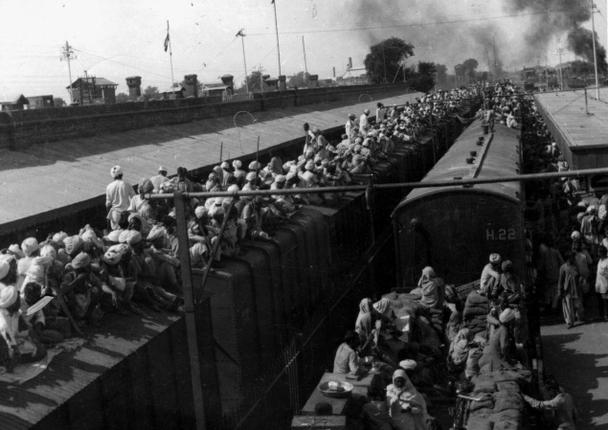 LOOKING TO THE FUTURE: “During my travels I found young Muslims vigorously debating the ‘challenges’ facing India’s 170-million-strong Muslim community, and what it should do to haul itself out of the hole it is in.” A scene during Partition.

The notion that a practising Muslim cannot be liberal has become conventional wisdom, but over the past decade it has all changed, writes Hasan Suroor in his new book, India’s Muslim Spring. Excerpts from the book

A Hindu friend once told me, even as he profusely apologized for his bluntness, that there was only one kind of Muslim — the fundamentalist kind. The idea of a ‘liberal Muslim’ was a ‘misnomer’ according to him. Such a person was first and foremost a liberal who also happened to be a Muslim because of the sheer accident of having been born in a Muslim family.

‘Their liberalism doesn’t derive from Islam. It has nothing to do with their being Muslims. They are liberals despite being Muslims and not because they are Muslims. I have yet to meet a devout Muslim who doesn’t have fundamentalist views. And mind you, I’m 70 plus and have known at least three generations of Muslims,’ he said.

The notion that a practising Muslim cannot be liberal has become conventional wisdom. And, to be honest, I have often found myself broadly agreeing with this view. Working in Delhi as a journalist until the late 1990s, I had a hard time finding sane, liberal voices, even in educated Muslim circles, on issues such as free speech, Muslim personal law, women’s rights, and secularism. There were either the agnostic/atheist, mostly left-wing secular Muslims who felt almost embarrassed to be defined by their religious identity, or there were ‘mainstream’ devout Muslims — defensive, insular, intolerant and deeply suspicious of their secular peers contemptuously dismissing them either as communists or government stooges.

There is no doubt that all faith groups are divided along liberal/fundamentalist lines (Hindus, Sikhs and Christians have their own share of fundamentalist ‘mullahs’) but the divide among Muslims was particularly stark. It was as if these were not two sections of the same community but two separate communities with parallel and irreconcilable world views. The future looked bleak and, like many of my generation, I had written off any possibility of a change in the Muslim mindset in my lifetime.

But over the past decade it has all changed. Now, there is a world beyond mullahs and Marxists, and the notion of a liberal Muslim does not sound so alien any more. It is amazing how much the Muslim mood has changed in recent years. Alas, my friend who had never known a practising liberal Muslim is no more. I’m sure he would have been as pleased as I am to have been proved wrong in assuming that Muslims were beyond change. He would have enjoyed meeting the likes of Aqeel Ahmed, Meher Rahman, Nasir Zaidi, Saba Bashir, Arif Ahmed — to name just a few of the numerous young, educated and progressive Muslims I came across in the course of writing this book — who see no contradiction between religiosity and secularism, and whose faith in Islam does not stop them from being secular Indians. Many don’t like the ‘minority’ tag which, they say, suggests as though they are on the fringes of Indian mainstream.

I routinely hear people lament that the Muslim mindset is still stuck in the 1980s and 1990s, mired in self-pity and a corrosive sense of victimhood with no room for introspection or debate. Apart from being extremely patronizing, such a view is lazy stereotyping of a whole community, and betrays a huge amount of ignorance and prejudice. For the reality is quite different.

During my travels I found young Muslims vigorously debating the ‘challenges’ facing India’s 170-million-strong Muslim community, and what it should do to haul itself out of the hole it is in. What particularly struck me was their courage to acknowledge what previous generations had doggedly refused to — namely, the community’s own role in its destruction. For the first time there is a willingness to face up to the fact that many of the wounds the Muslims suffered, and for which they blamed others, were actually self-inflicted.

‘Suicidal’ is how young Muslims describe the tactics of successive post-partition generations. They believe they have been handed a legacy that speaks of their elders’ profound failure to produce an enlightened and credible leadership. And they are angry.

‘Muslims are architects of their own misery,’ said Aamir Shahzad, a religiously devout postgraduate history student of Lucknow University, with barely suppressed fury. ‘I hate to say it but my father and grandfather’s generations have failed us. Their priorities have been wrong and we are paying for their mistakes. They allowed mullahs to become our spokesmen. And look where we are today.’

As an illustration of wrong priorities, many cite the fight that the community picked up over Babri Masjid. ‘I am not saying that it was not an important issue but if we had made the same sort of noise over discrimination that Muslims face in everyday life, and in demanding good education and jobs, it would have made more sense,’ argued Meraj Haider who runs a successful real-estate business in central U.P.

‘Challenge’ and ‘priorities’ were two terms I heard frequently in my interactions with the Muslim youth. The community, I was told, must get out of its siege mentality; stop seeing enemies everywhere and start on a new slate. There is a deep generational divide, especially in the 18-25 age group. They believe that their parents’ generation had been too ‘defensive’ about its Muslim identity and, for all its apparent secularism, tended to see India essentially as a ‘Hindu’ country and Muslims as a persecuted minority. Its perception of its Muslim identity was ‘too negative’, according to them.

I have some sympathy with this view though the theory, especially popular in the academia, that Muslims have always suffered from a deep existential ‘identity crisis’ as to who they were — ‘Muslims first or Indians first’ (an agonized debate on this has raged for as long as I can remember) is vastly exaggerated, as I’ve argued in another chapter.

The identity issue has its roots in Partition. Not many Muslims will acknowledge this but let’s be honest: it is a myth that every Muslim who chose to stay back in India was prompted by a sense of nationalism or was against the idea of Pakistan. Many stayed back simply because they found the sheer logistics of migration too daunting; others held back because of the fear of taking the plunge into an unknown and uncertain future; some tested the waters and decided that it was safer to hang back; and, indeed, quite a few — including some progressive Muslims — actually moved to Pakistan and returned when they discovered that it was not the promised land it was cracked up to be.

So the post-partition generation struggled with a massive historical baggage that, among other things, made it deeply conscious of its identity and its place in a Hindu-majority India — an ‘infection’ that it passed on to successive generations. Muslims from that generation admit to suffering a ‘Muslim complex’, as some put it. But they attribute it to the political climate of the time.

‘We were a product of our time. There was a climate of suspicion of Muslims because of Partition, and so on. There were communal riots every now and then, Urdu was being crushed because they said it was the language of Muslims…it was not easy to forget that you were a Muslim,’ said Ahmed Qadri, who ran a library of Urdu books and journals in Old Delhi in the 1960s. He was forced to close down the library as Urdu publications and their readers declined, leaving him with few books to lend and even fewer customers to lend to.

‘What happened to me happened because I was a Muslim…so how could I not be conscious of being a Muslim?’ he asked.

Muslims of his generation say that the Hindu Right made it impossible for them to forget their minority status. They were regarded as ‘lower orders who should know their place’.

For the younger generation of Muslims, on the other hand, Partition has no special resonance. It is something they read about in history books and feel no need to ‘obsess about’, as one young Muslim woman put it. Nor do they feel any special affinity towards Pakistan, which, if anything, they regard as a failed state — and an embarrassment. All this makes them less conflicted about their identity and minority status. They see themselves as any other Indian citizen except that they happen to be Muslims. They argue that Muslims are not the only minority group in India and there is no reason why they should put themselves in a special box.

But here’s the paradox. Precisely because they don’t suffer from the sort of identity crisis their parents did, they feel less inhibited about flaunting their ‘Muslim-ness’. That explains the proliferation of beards and hijabs; and the rush to the masjid, a growing global trend among young Muslims. But they insist that this assertion of their ‘Islamic identity’ does not diminish their Indian-ness, which is what ultimately defines them. Allama Iqbal wrote, ‘Hindi hain hum watan hai, Hindustan hamara.’ And that pretty much sums up the modern Indian Muslim. Damn the beard.