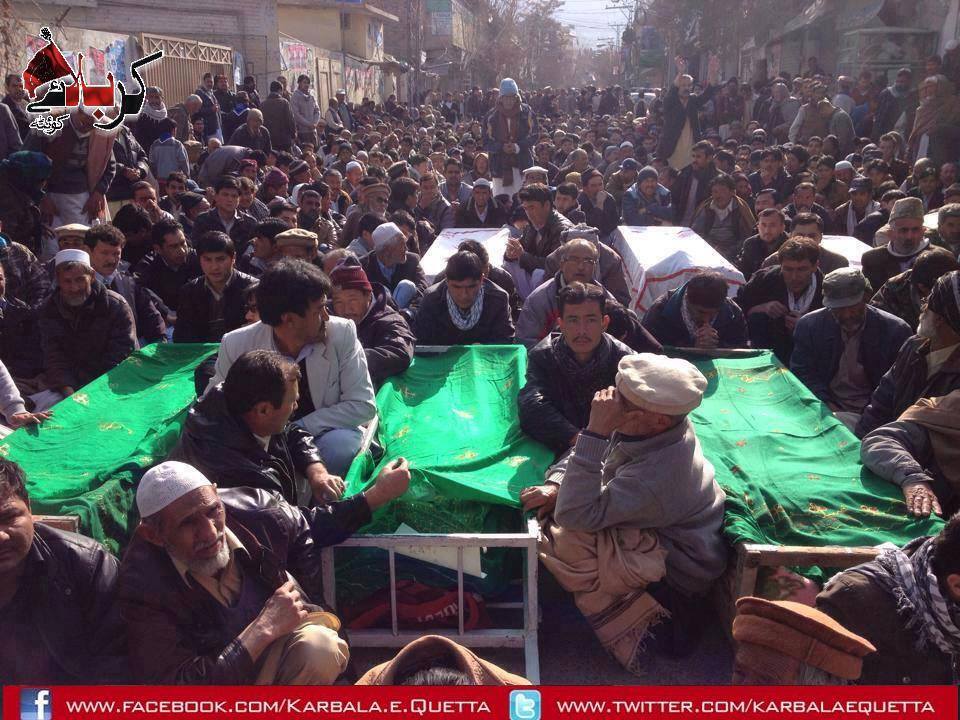 The Shia Hazara of Quetta are fighting cold weather and even colder attitude from their countrymen as thousands of them continue their sit-in in solidarity with the families of the Mastung blast victims demanding immediate and across the board action against Deobandi terrorits (variously opeating as Lashkar-e-Jhangvi/Sipah-e-Sahaba/ASWJ/Taliban) throughout Pakistan. But as this sit-in continues, life in Pakistan seems to be normal as if nothing serious has happened. It seems as if the Shia pilgrims, including Hazara and non-Hazara Shias, who were killed in Mastung the other day never existed for most of the Pakistanis.

This status update from Facebook by a resident of Quetta tells about a cancer survivor who not only lost her life in the Mastung blast herself, but her family lost even her corpse and any sign that she ever existed:

“A few years ago I was approached by a friend asking me to donate blood to a cancer patient. Though the girl had been declared terminally ill by the doctors, her family decided to take her to Iran for pilgrimage and prayers. They went for her retests upon returning from Ziarat of Imam Raza (as), and not surprisingly, the tests returned negative; she had been healed. Last night, the same girl was one of the passengers travelling from Iran to Quetta when they were attacked at Mastung. And I have been told that the girl seems to have vanished in thin air. Not even an inch of her remains have been recovered from the blast site. The family that had celebrated the new life of their daughter a few years ago are now hoping to find at least some remains confirming that she is no more.”

One might as well add that not only has that girl dissolved into thin air, but all of the Mastung blast victims seem to have never existed. The national and international media are criminally silent or continue to obfuscate the issue as either Saudi-Iran proxy war/ Sunni-Shia sectarian violence, or by presenting the incident as a case of ethnic violence against the Hazara community. They are hell bent upon hiding the Shia identity of the victims and the Takfiri Deobandi identity of the ASWJ-TTP terrorists. In fact, some TV channels are callously inviting Deobandi terrorist clerics of banned Sipah-e-Sahaba (ASWJ) as represnetives of Sunni sect while ignoring that majority of Sunni Mauslims, Sunni Baerlvis/Sufis, have rejected and disowned Takfiri Deobandi clerics and terrorist outfits.

In fact, not only the Mastung blast victims, but all 25000 Shias killed in Pakistan for being Shias, and thousands of Sunni Barelvis, Ahmadis, Christians, Hindus and members of other ethnic and religious groups killed by Takfiri Deobandis working under various groups (Taliban/TTP/LeJ/ASWJ) never existed. They do not figure anywhere in the discourses and narratives of the politicians, journalists and even most of the ordinary citizens. Their lives and deaths are given no importance when ostensibly germane analyses about future relations with these Takfiri Deobandis are pragmatically discussed. It is made to appear that talking to these monsters is the only option and their crime – of killing over 60 thousand Pakistanis – is not as issue worth considering.

The media is also deliberately hiding important demands and questions raised by Shia Muslims of Quetta and across Pakistan. These questions include: If a secular Baloch leader Akbar Bugti can be brutally killed by Pakistan army, why are the known ASWJ-TTP terrorists such as Ramzan Mengal, Aurangzeb Farooqi, Malik Ishaq, Ali Madad Jattak still alive? Why does Pakistan army/FC in Quetta continue to provide full protection and patronage to hate clerics and terrorists of banned Sipah-e-Sahaba aka ASWJ? Why can’t army bomb the Deobandi madrassah in Mastung, the largest hub of anti-Shia terrorism in Balochistan? Why can’t judiciary investigate incidents in which high-profile Deobandi ASWJ terrorists silently escaped from high-security prisons in Quetta and Gilgit? Why do PM Nawaz Sharif and CM Shehbaz Sharif continue to support clerics and terrorists of banned SSP/ASWJ without being held accountable?

It is unfortunate that for the media as well as ordinary Pakistanis, the only people that matter and who exist are terrorists who die through drone strikes or are in captivity, like Aafia Siddiqui. Their lives matter. They names are served hourly on every TV channel by almost every media person. But the Shias and other victims of Takfiri deobandis seem to have nevr exist. Those that had died have dissolved into thin air, those speaking for them have been deliberately silenced, and those who shall die in future await the same apathy. 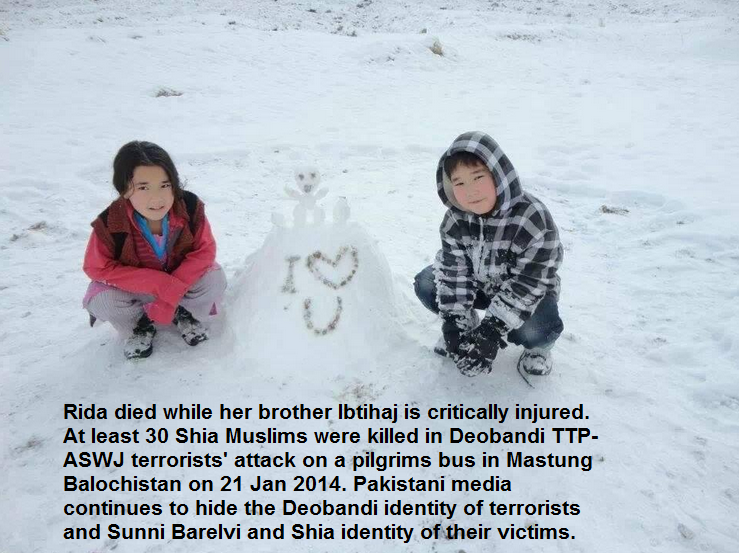