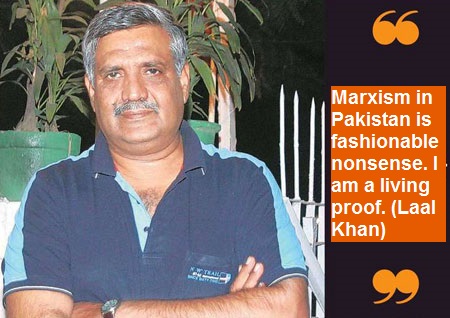 This dubious Pakistani leftist Dr Lal Khan continues to confuse an already confused Pakistani nation. In his column in Urdu daily newspaper Dunya (23 Dec 2013), he criticizes PM Sheikh Hasina Wajed on the trial of Jamaat-e-Islami leaders including the notorious rapist-murderer Abdul Qdir Mullah. Laal Khan criticizes anti-Pakistan demonstrations in Bangladesh which took place after the blatantly offensive statements by Pakistans’s Islamist politicians against Bangladesh government and Supreme Court which is tantamout to meddling in internal affairs of a soverign country. Laal Khan also criticizes the notion of the Bengali nationhood. Bear in the mind that this man (Laal Khan) is equaly adept in obfuscating issues of national importance in Pakistan including but not limited to Shia genocide at the hands of Deobandi Takfiri terrorists. This man is a typical example of the confusion and lack of direction of Pakistani left, where Marxism seems to be nothing but fashionable nonsense.