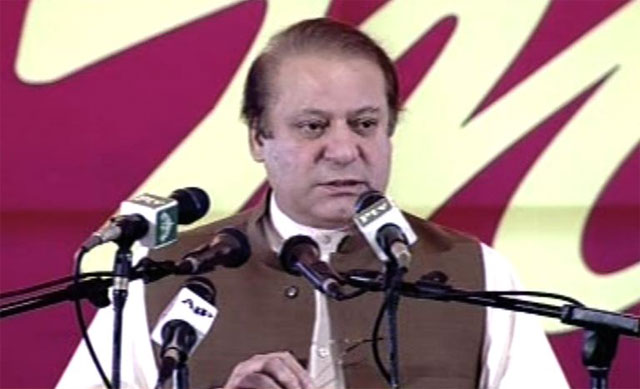 Ideally there should be no discrimination in a country’s law of the land, but if somehow that is not the case, every care should be taken to make sure that the minority communities can enjoy those rights that are afforded to them under the law, without fear of persecution. Pakistan’s record has not been stellar in this regard; minority communities have been treated like second class citizens, with government looking the other way when religious fanatics attack Christians Hindus and Ahmdis. Tolerance is a thing of the past around these shores, maybe.

Amid this, Prime Minister Nawaz Sharif’s statement that minorities enjoy equal rights in Pakistan if not downright insulting, certainly attempts to paint another picture, one that is not seeped into the ground realities. He clearly seemed to have no idea of Pakistan’s track record in protection of minorities’ rights. Or maybe that was the intention behind his speech that he gave at a Christmas related ceremony at Governor House in Lahore. To refresh his memory, here are a few of the transgressions against the minorities. A whole colony of Christians in Lahore, Joseph Colony, was burned down by religious nuts while a few years ago almost 100 Christians were killed in Gojra. In another incident, over 30 members of Ahmdi communities were killed in none other than the provincial capital Lahore.Former Governor Punjab Salmaan Taseer and Minorities Minister Shahbaz Bhatti, a Christian, lost their lives owing to their stand on blasphemy law. Hindu community has been persecuted so much so that they have started to migrate to India. What is happening with the Shias, who are also in minority to Sunni (which include ultra conservative and fundamentalists Wahabi, Deobandi sects), is in clear contradiction to what the PM was trying to say. As far as minorities’ rights are concerned, Pakistan needs a lot more to do.

The government should start with enforcing laws, spreading awareness and creating an environment where each religion and each sect can co-exist. It should also start formulating a framework to amend or repeal those laws that create a distinction between what should ideally be considered equal citizens by the state, instead of being divided into categories for easy target picking. Maybe the prime minister was right about minorities enjoying equal rights, but that time has not come yet. Far from it, but maybe if we work together we can bring that time sooner rather than later.