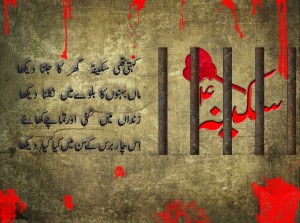 Hazrat Ali Asghar also known as Abdullah was the youngest child of Imam Husain(a.s). He was born only a few weeks before Imam left Madinah. His mother’s name was Rubaab daughter of Imra’u’l Qais who was the chief of the tribe of Kinda.
Rubaab had two children, Sakina s.a and Ali Asghar. She and her two children accompanied Imam to Karbala. The fact that Imam took with him a newly born baby further demonstrates that his intention was never to engage in any armed rebellion.
13th Safar is the day when we remember the martyrdom anniversary of Bibi Sakina bint-al-Hussain (sa) – the 4-year old beloved daughter of Imam Hussain who died in the prison of Damascus after the family of the Prophet Mohammad were made prisoners after the events of Karbala and detained in the prison of Damascus.

On the day of Ashura – the 10th of Muharram, she gave her mashk to Hazrat Abbas to get some water for her and the children. When Hazrat Abbas went to fetch water, the children gathered round Bibi Sakina with their little cups, knowing that as soon as Hazrat Abbas brought any water, Bibi Sakina would first make sure that they had some before taking any herself. When Bibi Sakina saw Imam Hussain bringing the blood drenched ‘alam she knew that her uncle Abbas had been martyred.

Knowing that her weeping upset her mother, Bibi Sakina (sa) would cry silently and quickly wipe away her tears! In the prison in Damascus she would stare at the flock of birds flying to their nests at sunset and innocently ask Bibi Zainab (sa), “Will we ever be going home like those birds flying to their homes?”

One night Bibi Sakina (sa) was asleep and she suddenly woke up crying and started to look for her father everywhere. All the ladies tried to console her so she would stop crying but she didn’t get any peace and continued crying, “O my dear aunt where is my father a few minutes ago I was with my father and he kissed me and said to me that my dear Sakina you will soon be with me. But where is my father now?”

When Bibi Sakina told her dream, all the ladies started to cry and now this noise of crying was heard by Yazid (la) at his court. Yazid (la) sent a servant to ask why they were crying. The servant was informed that Bibi Sakina (sa) missed her father and that is why she was crying. They informed Yazid of the situation, and Yazid, for his sadistic pleasure, sent the severed head of Imam Hussain to the prison and when Bibi Sakina received the head of her father she started to cry even more and held it very tight and asked her father, who cut off my father’s head, who martyred my father, why are we held as captives?

With these words of sorrow suddenly Bibi Sakina (sa) was quiet and there was a silence in the cell. Everyone thought that Sakina had finally gone to sleep again but this was not a temporary sleep, Sakina had now gone into a permanent sleep. Bibi Zainab called Zain-ul Abideen to check the status of Sakina as they thought she had fallen unconscious. When the Imam went over to check on his sister, he noticed she had stopped breathing.

When the time came and they were released from the prison, Bibi Rubab (mother of Bibi Sakina) came to the grave of her beloved daughter (sa), put her cheek on Bibi Sakina (A.S)’s grave and cried out, “Speak to me Sakina. Only a word, my child, speak to me”.

Bibi Sakina’s body was removed from its original burial place, Dungeon of Syria, some centuries later, when a pious man of Damascus was informed in his dream that water was pouring into the grave of this young Hashmite princess (sa). Upon confirmation that ground water was actually entering the grave, Bibi Sakina’s body was buried in a new shrine near Yazeed’s (La) palace, where she rests today. Her body was in the condition that if she had been buried the same day.

It was her father Imam Hussain who was brutally martyrd in Kerbala. It was her baby brother Ali Asghar who had an arrow shot through his neck. It was her beloved uncle Abbas that had both his arms cut off. It was she who spent her last days in a dungeon. The little princess of Imam Hussain . The only person to never make it out of that desolate dungeon. She was Bibi Sakina (sa), the young Hashemite princess.

Even non Muslims admitted the Children Role of six months Infant: Tom U.S marine from Iraq (Karbala)Letter to his Mom at Houston(America):-

Let’s come to Toms letter (sent after Iraq invasion ) that How KARBALA has influence on the Psyche of U.S Soldiers.

He Writes “Hi Mom! I am your son Tom. This is my third day in a trench close to the town of Karbala.They revere the place. People here say Hussain, the grandson of their Prophet Muhammad, had laid down his life along with entire male members of his family, including a six month infant, in the name of Allah, their God…

At least I have not traveled all the way from Houston to this desert country to fight in the name of God. We are here because our President (American President)desired us to be here.”

This clearly shows that the so called war against terror and regime change in the name of democracy started by U.S Israel and its allies(Zionists lobby) in different parts of world like Afghanistan,Iraq,Syria,Pakistan is even rejected by its own citizen who started Occupy Wall street movement inside America and Europe as well by hundreds of American soldiers and marines like Tom who are in tension and Psychological diseases

At Karbala Asghar was only six months old. From the seventh Muharram there was no water in Imam’s camp. Asghar was in great pain because of thirst.
On Ashura day, after Ali Akber had been killed, Imam Husain was standing outside the camp. He was left all alone and he was preparing to go into the battlefield. Just then he heard a child cry. It was Ali Asghar, tormented by the pangs of hunger and thirst.
Imam walked into Bibi Rubaab’s tent. He lifted the child from the cradle. “Rubaab,” he said, “I will take him to Yazeed’s army. Surely they can not possibly deny this little infant a few drops of water?” Rubaab changed Ali Asghar’s clothes. She even tied a small turban on his head. Like any other mother she wanted her son to look at his best in front of strangers.
Imam Husain carried the child to the battle field. Walking up to Yazeed’s soldiers Imam Husain said, “This child has done you no harm. He is dying of thirst. I am begging for a few drops of water for him.”There was no response. Imam said, “If you are afraid that when you bring Asghar any water I will drink it, look, I will put him on the ground and you can come yourself and give him water.” He put the child on the sands of Karbala and moved a couple of steps back. You can imagine how hot the desert sand was. Asghar lay there not even wincing. He turned towards the enemy and stared at them. A murmur arose among the soldiers but no one came forward to give water to the baby. Imam took Asghar in his arms and in a clear voice said, “Asghar, my son, show them how thirsty you are!” Asghar turned his head towards the soldiers. He smiled sweetly. Opened his mouth. Brought out his dry tongue and moved it over his lips. The ultimate sword had been unsheathed!
The soldiers were so moved by this that they could be heard sobbing. Still, they were very afraid of Yazeed and none dared come forward to give water to Ali Asghar.
Umar Sa’ad was worried. It seemed that Asghar was emerging victorious in this confrontation against the might of Yezid. He looked at Hurmala, a famous archer, and said, “Silence Husain!”
Then a terrible thing happened. Hurmala lifted his bow. Aimed an arrow at the child. The arrow flew across the hot desert. There was a hissing sound. Asghar smiled. He lifted his head and arched his neck!! No civilized mind can even imagine what happened next. The hissing sound stopped and Asghar lay still on his father’s arms.
Imam Husain looked down at Asghar’s neck, he saw the arrow, he saw the neck, he saw the smile and then he could see no more!!!
Our Imam began to feel faint. For a moment everything went dark. He could not see! There was a total silence over Karbala, broken only by the sound of the gentle waves of Furaat. Even the enemy appeared stunned.
Slowly Husain turned round and now looked at the baby in his arms.
The arrow had passed through the tender neck and lodged in Imam Husain’s chest. There was no way Imam Husain could dislodge the arrow. His two arms were supporting the still child. He looked at the sky, and prayed “Ya Allah, give me courage in this most difficult moment of my life. No Prophet ever was subjected to a test as severe as this.”
It is said that the Imam was so shaken up by what had happened to the infant child that all of a sudden his beard went all grey and he looked an old man. With his teeth he pulled his abaa over Asghar to shield the body from the scorching sun. Then he took a few deep breaths, and began to walk towards his camp.
As he got near he saw Rubaab standing at the entrance to her tent. He saw the anxiety, the hope, the fear and the restlessness in her eyes. Our Imam seemed to lose all strength. He could not walk forward towards Bibi Rubaab. He took seven steps back saying “INNA LILLA-HI WA INNA ILAY-HI RAJEEOON”. He stopped and thought that he must take the child to his mother. He again took seven steps forwards saying “INNA LILLA-HI WA INNA ILAY-HI RAJEEOON”. Once again his eyes met with those of Bibi Rubaab’s. Again our Imam seemed to lose his courage and walked backwards repeating “INNA LILLA-HI WA INNA ILAY-HI RAJEEOON”. Imam Husain did this seven times. Forward and backward. All the time Bibi Rubaab’s eyes remained transfixed on the child. Each time Imam reciting “INNA LILLA-HI WA INNA ILAY-HI RAJEEOON”
Finally, somehow, he got the arrow dislodged. He now took the dead infant to Bibi Rubaab. He said, “Rubaab! This is a test from Allah which no mother has ever been asked to go through. Come with me” Bibi Rubaab followed. With their own hands they dug a small grave! The father and the mother together buried Ali Asghar!

The active  role of all age groups especially aged women and children  in true path of karbala gives lesson that  karbala is even Ideal and valid today in 21st century changing world scenario  that all even women and children should raise their voic against oppression and even  practically struggle Because according to saying of Imam Hussain(a.s) that “To remain silent on oppression(evils/cruility/terrorisim) is equal to be a part of oppression”.(The end)
Source :
https://worldshiaforum.wordpress.com/2013/12/14/martyordim-of-four-years-bibi-sakinas-a-in-prison-of-yazeed-by-s-h-bangash/