Arif Jamal is an independent journalist and scholar based in the US. Besides his forthcoming book, Call for Transnational Jihad: Lashkar-e-Taiba 1985-2014, he is also author of Shadow War: The Untold Story of Jihad in Kashmir and several monographs and studies. During the last 15 years, he has written more than 350 investigative and interpretive articles in English, focusing on subjects such as democracy, human rights, Islamist politics in Pakistan, jihad in Kashmir, Pakistan Army, madrassas and Afghanistan.Having worked for several Pakistani and international publications as a journalist, he has reported from nearly 20 countries. He has also been a frequent commentator in the international media. Jamal has been a fellow at distinguished institutions, including Harvard University, Cambridge, USA, and University-College of London, UK, and New York University, USA, and the World Press Institute, Macalster College, USA. Excerpts follow:

The News on Sunday: In Pakistan’s context, sectarianism took roots in the 1980s as a consequence of the Iranian revolution and jihad in Afghanistan. That was when Sipah-e-Sahaba Pakistan was founded. From 1990s onwards began a period of sectarian violence. Is that a correct reading of recent history?

Arif Jamal: Yes, it is. However, we need to understand the context. The seeds of violent sectarianism were sown when General Ziaul Haq tried to strengthen his rule by imposing the sharia of one sect at the cost of others. The Shia Muslims reacted adversely and literally occupied Islamabad. There was no government in the country for several days. The Ziaul Haq regime bowed to the Shia Muslims’ demands. However, the way Pakistani Shias protested scared General Zia and his Deobandi allies. Thereafter, General Zia and Deobandi parties worked consistently to, what I would call, ‘Sunnify’ the country. As a result of this support, Pakistan is emerging as a Sunni state where it is becoming more and more difficult for non-Deobandi Muslims and other religions to live. Had there been no Iranian Revolution, the Pakistani Shias might not have reacted in such a way. That is where the role of the Iranian revolution ends. Pakistan is actually close to becoming the Sunni version of the Shia Iran, even much worse. In Pakistan, it is becoming almost impossible for non-Deobandi and non-Ahle Hadith to live without fear. The irony is that even the majority sect, the Barelvi Muslims, have come under attack by the Deobandi and Ahle Hadith. Iranian support to Pakistani Shias is only a fraction of Sunni Arabs’ support to the Deobandi and Ahle Hadith parties and groups.

TNS: How and why did LeJ separate from SSP and what were the effects of this separation on society?

AJ: I never considered the SSP and LeJ as two different organisations. LeJ is the armed wing of the SSP. In the mid-1990s, the SSP realised that its popularity among the people was growing and it could become a politico-religious party in the sense the Jamat-e-Islami of Pakistan is. However, it realised the stigma or label of terrorism was an obstacle in its way to become a national political party. In other words, the people were ready to vote for its anti-Shia and anti-Iran ideology but they were not yet ready to implement the anti-Shia agenda with the use of force. At that point, the SSP decided that it would do politics and its armed wing, the LeJ, will implement its political agenda through violence. The LeJ, on its part, has been playing the same game and staging the drama of parting ways with each other to save others in the organisation from the law. We have seen that central leaders of LeJ, like Tariq Alam and Malik Ishaq, emerged as SSP leaders overnight. This shows the close relations between LeJ and SSP/ASWJ (Ahle Sunnat wal Jamat). This was a great strategy which has helped the organisation to work freely with impunity. SSP has emerged as an important political party under different names. It can win several seats in the national and provincial elections. It has a definite vote bank in a large number of constituencies where other political parties are dependent on the SSP to win. This explains why the PML has consistently wooed the SSP.

TNS: Tell us something about the LeJ and its working today. What are the various factions and their links with SSP and what is the difference between LeJ and LeJ al-Alami? Also, what is the status of its founding members like Malik Ishaq and Akram Lahori, etc, within LeJ these days?

AJ: There are several factions among the LeJ also but all of them seem to be loyal to the parent party — the SSP — or its newest re-incarnation, the ASWJ. There have been serious differences among the different groups of the LeJ but they have not abandoned their loyalty to the parent party. Most differences revolved around the question of how much violence they should inflict on Shia Muslims. LeJ al-Alami is more inclined towards extremism than the LeJ.

TNS: How is sectarianism within Pakistan linked with sectarianism internationally; is that where we should look for their resources both financial and logistical?

AJ: Islam, like any other religion, is very sectarian. However, the kind of violent sectarianism we see in Pakistan is found only in Afghanistan. They raise the bulk of their funds from within their countries, through donations, including zakat and usher, etc. They also receive a lot of money from Pakistani expatriates in the Gulf and the West. Most of these funds come in the name of religion.

TNS: In the 1990s, all major sectarian groups were brought on the platform of Milli Yakjehti Council. Why did it fail and is there a possibility of making another such effort and hardline groups like LeJ joining it?

AJ: I don’t think Milli Yakjehti Council was a serious effort to curb sectarianism. It was an alliance of Sunni parties and groups which publicly supported Deobandi parties and groups. They wanted the Shia parties to give in to the Deobandi demands. The Sunni members of Milli Yakjehti Council always condemned the killings of Sunni leaders but remained silent on the mass killings of Shia Muslims.

TNS: What are the connections of LeJ with Tehrik-e-Taliban Pakistan and al- Qaeda? Is it true that LeJ is one of the major operational wings of these terrorist and extremist groups in Pakistan?

AJ: The LeJ is an active component of the TTP. The ideology of the SSP/LeJ is the backbone of the TTP. In fact, all the groups are extremely sectarian in their outlook. They all believe in killing Shia Muslims and non-Muslims. Some groups even believe in waging war on the majority sect, the Barelvis. Actually, all the Deobandi groups and parties support the TTP even if they disavow any links. They share the same worldview. They have the same political goal although there are some differences on tactics.

TNS: What is the role of the state in dealing with sectarianism?

AJ: Unfortunately, instead of fighting sectarianism, the Pakistani state has continuously and actively encouraged and supported Deobandi and Ahle Hadith sectarian groups and organisations because they were ready to fight jihad in Kashmir and Afghanistan. Another important reason for this was that Saudi Arabia was continuously forcing Pakistan to keep Barelvis and Shias out of both Kashmir and Afghan jihad. This is why we see only Deobandi and Ahle Hadith groups participating in jihad in Kashmir and Afghanistan. As a concession to the Deobandi/Ahle Hadith groups fighting in Kashmir and Afghanistan on behalf of the Pakistani military, the government turned a blind eye to the sectarian terrorism in the country. As a result of these policies, Pakistan is on the road to become a Sunni state. I believe the Sunnification of Pakistan is a threat to both Pakistan and world peace. We have already seen that the Deobandi jihadist groups have already turned their guns towards the Pakistani military. Unfortunately, the worse is coming. 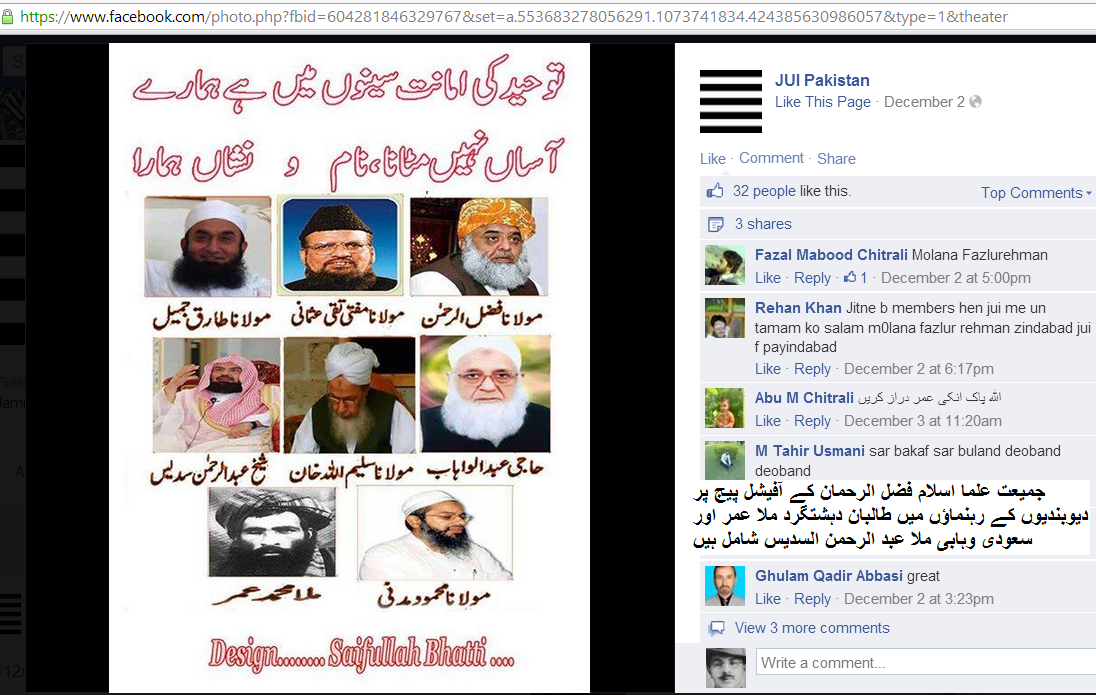