Guess who was spotted on November 9 in Washington D.C. at a reception for American and Pakistani media personnel thrown by US AfPak ambassador Richard Holbrooke‘s media assistant Ashley Bommer? Mir Ibrahim Rehman, scion of the house of Jang and CEO of the Geo TV Network. He walked in with The Friday Times editor and Dunya TV’s Najam Sethi but stayed long after Sethi left the party. 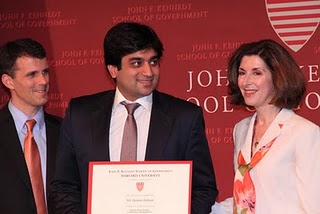 Mir Ibrahim (MIR) apparently jetted in for a mysterious three-day visit to the US, during which, our sources say, the main objective was to convince the US administration that Geo was neither anti-US nor anti-democracy, the line being peddled by the Pakistan Peoples Party (PPP) government. MIR also wished to gather official American support for the Jang Group against the PPP boycott of the group as an instance of an assault on freedom of the media.

Our sources claim that MIR did not find too much traction among US officials against the idea of a media boycott, perhaps because the Obama administration itself has a similar boycott against Fox News (albeit without the shoe-throwing rent-a-demos and vile grafitti scrawls against Fox News owners). However, what is particularly interesting about the Jang Group’s attempts to woo the American establishment is the fact that there has been apparently a lot of discussion within the US government about whether it should support and even subsidize a media group that has no qualms about running shrill propaganda against the US, and sometimes even promoting a pro-Taliban line. In particular, Hamid Mir‘s contribution to whipping up Blackwater hysteria in Pakistan, Ansar Abbasi‘s rants about Western puppets, and the space given to nutjobs such as Zaid Hamid (Aag TV) and Ahmad Quraishi (Aag TV and The News) have apparently raised quite a few eyebrows in the US administration.

The Americans have reason to be upset with the Jang Group, and MIR has reasons to find their upset unsettling. The running of the banal American propaganda Voice of America (VoA) programme Khabron Se Aagay [Beyond the Headlines] as an ‘advertorial’ on Geo since 2005 has netted the Jang Group and its owners, by some accounts, millions of US taxpayer dollars. Although the exact ‘compensation package’ doled out to Geo by the US government is still secret, it should be noted that the deal between Geo and VoA was mediated during the Bush-Musharraf era by the then Information Secretary Anwar Mahmood and advertising whiz-kid Asif Salahuddin, the latter of whom is reputed not to touch ‘small’ deals. Apparently, part of MIR’s discussions with the US administration included those on the future of the Geo-VoA deal.

Incidentally, while Najam Sethi was ostensibly in the US for medical check-ups and may have been present at the Bommer reception only coincidentally, as we have reported in the past, he too has been trying to persuade American-backed NGOs to fund a new ‘liberal’ channel to be headed by him.

Coming back to MIR, it seems that more than American upset, a potential threat of withdrawal of lucrative financial support may be the trigger for a panic at the Jang Group. As they say, bullshit may walk but it’s money that talks. I have a strong feeling that you may well see the (media) house line shifting very soon. If you suddenly begin to miss the casual anti-US vitriol in the group’s publications and on Geo, you’ll know why.