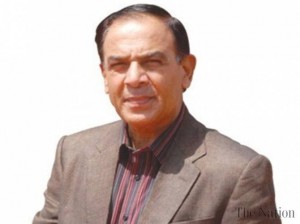 ISLAMABAD – Chairman National Accountability Bureau (NAB) Qamar Zaman Chaudhry instead of ratifying the illegal and unlawful acts of his predecessor Admiral (Retd) Fasih Bokahri has closed his eyes on appointments of four lucky director generals (DGs) in Grade-21 made in sheer violation of the departmental rules during the caretaker government, sources told The Nation on Thursday.
Sources informed that during the caretaker government the then Chairman NAB Admiral Fasih Bokhari had appointed some four director generals in Grade 21, in sheer violation of the departmental rules and also in clear violation of provincial promotional quota.
Sources further said that on top of it these appointments were made during the period when the Supreme Court of Pakistan had imposed a complete ban on appointments in the government department, but the authorities concerned had ignored all the instructions of the apex judiciary and continued with their plan of bringing in their blue-eyed on lucrative posts.
The new slots created by the then Chairman NAB to oblige his blue-eyed included DG Training and Evaluation, DG Prevention (Provincial), DG Awareness and Media and DG Financial Crime Investigation Wing (Prevention and Enforcement of financial Crimes/ Taxation).
Further explaining the issue the sources in the department informed that these new slots in Grade 21 were created through an administrative order by the then chairman NAB Admiral (Retd) Fasih Bokhari and its approval was secured from the then prime minister Raja Pervez Ashraf under a well carved out strategy for obvious reasons, as some of the key PPP leaders including Raja Pervez Ashraf himself are facing some serious corruption cases being investigated by the department.
Such a step on part of chairman NAB was in clear violation of the statutory service rules as well as section 28(c) of National Accountability Ordinance 1999.Section 28(c) of NAO 1999 reads; “The officers and members of staff (of the NAB) shall be entitled to such salary, allowances and other terms and conditions of services as the Chairman NAB may, with the approval of (President) determine.” So in the light of this rule Prime Minister is not competent to alter any service rules governing the NAB officers.
As all these slots were filled during the period of the caretaker government and the apex court through its order in Constitutional Petition No.30, 2013, had declared that all appointments made during the Caretaker Government as illegal and void, but the people at the helms of affairs in NAB are least bothered and least moved to put the things in right frame by ratifying the illegal acts of former chairman NAB.
Sources said that the senior officers of the department were expecting that things would change after the stepping in of incumbent Chairman NAB Qamar Zaman, but to their sheer disappointment instead of removing these illegally appointed officers he was completely relying on these handpicked officers of his predecessor and keeping these people on the powerful position they were doled out by Admiral (retd) Fasih Bokhari