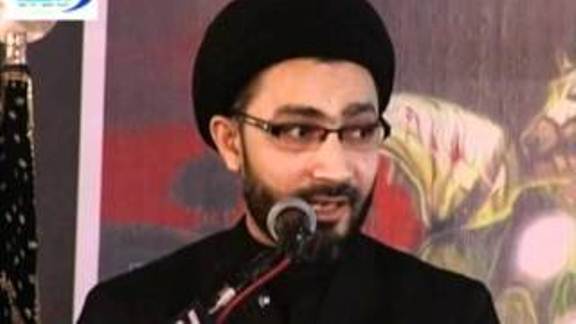 In his passing remark, he says that “British colonialists created three sects in 1924 namely Qadiani, Bahai and Wahhabis” and then (although does NOT say it explicitly) but implicitly suggests that sectarianism is caused by these sects. There is no further comment on Ahmadi Muslims, their faith or any derogatory remarks. However, as an observer, I find this comment misleading and inappropriate.

Here is the video:

Post by Hadi tv channel.
There is absolutely no record of Pakistan's Shia community going violent against Ahmadi Muslims, organizing processions, seminars or conferences for the purpose of attacking Ahmadi Muslims or provoking hate/violence against them. Also, they have not been party to any of such events or attacks. All violence against Ahmadi Muslims have come from the same groups that target Pakistani Shia, shrine going Barelvis and Christians. For details see this and this. Comments like this, although not inciting violence, are derogatory and do not represent the opinion of the wider Shia community.This speech is uncalled for and equating Ahmadis with Wahhabis is ridiculous. While the terrorists funded by KSA, UAE, Qatar etc (mainly Takfiri Deobandis, Salafis or Wahabis in some cases) have monopoly over violence in Pakistan; Ahmadi Muslims have been persecuted through history and have been silently taking it. We have evidence from the 'Lawrence of Arabia' episode and British support for the KSA to overthrow Ottoman caliphate in early twentieth century showing connections but it is intellectual dishonesty to make the claim that the Ahmadi Muslim community was founded by the British colonialists with no evidence whatsoever.All sects have a view or an opinion of another sect and ofcourse consider themselves better than others and I do not see anything wrong with that. If you think other sects are better or same as you, it beats the point of having your own sect. So as far as this is concerned it is alright but going beyond that e.g. inciting violence against another sect or going violent is absolutely unjustified and criminal. Thankfully, that has not been done in this speech. However, the speaker has wrong information on history clearly and has a bigoted viewpoint on Ahmadi Muslims.
Allama Shehenshah Naqvi's remarks come as sheer disappointment considering only a few months ago, Jaafria Disaster Management Cell (JDC), a relief organisation which he heads recognized an Ahmadi Muslim killed in Abbas Town Karachi blast as Shaheed and his family was compensated by JDC just as Shia martyrs were.
[See reference in The News and Ahmadiyya Times]
See below for another viewpoint, from the most respected and most senior Shia scholar alive on earth today:
Post by Progressive Shia Activists of Pakistan.