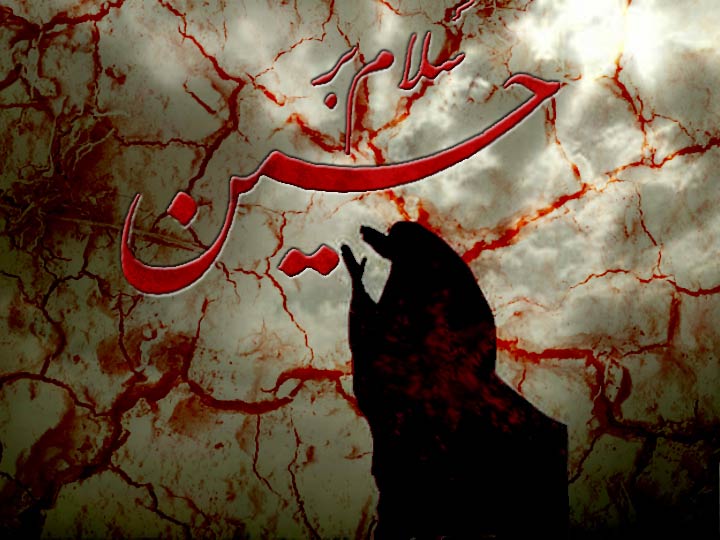 O Muhammad (Sallallahu Alaihi Wa’sallam)! May the angels of heaven bless you. Here is Husayn in the open, stained with blood and with limbs torn off. O Muhammad! Your daughters are prisoners, your progeny are killed, and the east wind blows dust over them. These were the cries of Zaynab bint Ali as she passed the prostrate body of her martyred brother, Hazrat Husayn (AS). Of that gallant band, male and female knew that the enemy forces around were implacable, and were not only ready to fight, but to kill. Denied even water for the children, they remained parched under the burning sun and scorching sands, yet not one faltered for a moment. Husain marched with his little company, not to glory, not to power of wealth, but to a supreme sacrifice, and every member bravely faced the greatest odds without flinching.

The storyline of Karbala is imprinted in sacred and an indelible red, the stains of which will never grow fainter. It was the blood of the Prophet (PBUH)’s family which was drifted inhumanly in the murky waters of the Euphrates, a sip of which was not even available to a six months old baby Asghar who was murdered by the arrows of the brutal forces of Yazed. It was a battle that decided the fate on righteousness, on the soil and on the firmaments. ‘If the religion of Muhammad(PBUH) was not going to live on except with me dead, let the swords tear me to pieces’ – this was the audacity of Hazrat Husayn (AS) who fell in prostration as he gave his life fighting for Allah’s religion after losing all of his companions. He was beheaded and the bodies of the martyrs were mutilated and left unburied for forty days. The violence did not culminate here. His family was enslaved and Husayn’s three year old daughter Sakayna died as a captive. However, the martyrs of Karbala were the eventual winners. They were killed, but their beliefs could not be obliterated. Instead, Husayn and his companions became an emblem of gallantry, resoluteness and legitimacy for the people of all the nations and all the religions, his sacrifice having set a paradigm. They were no non believers, but the so – called Muslims who killed the grandson of the Prophet of Islam (PBUH) in cold blood about whom he said: ‘Hussain o minni wa ana minal Hussain’ – Hussain is from me and I am from Hussain. What could be a larger exhibition of fondness than calling him a part of himself? They did not attempt to kill Husayn, but a central part of the Prophet (PBUH) which they could not. Yazed and his followers were doomed to convene abhorrence and blight, their names tantamount to defeat and nuisance. Husayn’s message and venture to protect his grandfather’s religion, on the other hand achieved an undying existence of splendor. Hazrat Muhammad (PBUH) is reported to have said: ‘As a result of the assassination of Hussain, such warmth will be kindled in the hearts of the believers that shall not become cold till the Day of Resurrection.’

The Karbala did not lapse with the martyrdom of Hazrat Husayn and his companions. It is an as pertinent phenomenon even today. The followers of Husayn (AS) continue to be butchered by the gruesome Taliban who claim to be the vendors of faith. The blood of the Shias does not arouse any remonstrations in this so known as the land of the pure. Hazrat Husayn (AS) gave the sacrifice of his life and his kin to protect God’s faith unlike the Taliban who use suicide jackets to kill innocent civilians and our brave soldiers to spread Yazed’s Islam. The Karbala recurred in Pakistan with the Bhutto tragedy. Shaheed Zulfikar Ali Bhutto was murdered by Yazed’s courts by speaking up for the rights of the dispossessed population of his country. Benazir Bhutto Shaheed, following in the footsteps of Bibi Zaynab (AS) lost her father, both her brothers and travelled to the desolate wilderness of Karbala despite the dangers to her life and perceiving that the soil was thirsty for her blood, ultimately giving her blood for speaking against Yazed’s religion lectured by the scroungers. They, however, could not mute Hussainyat. The grandson of ZAB stands as firm as ever against the forces of Yazed who have held our nation hostage. Despite being on their hit list, he is the only politician in Pakistan who holds the bravado to gape in their eyes and label them animals. It was probable for the Bhuttos to live a life of ease by surrendering to these tormenters but they chose not to be intimidated and silenced, but instead wrote a golden history which lies buried under the petals at the graveyard in Garhi Khuda Bux. Like Maulana Muhammad Ali Johar, the pioneer of the Khilafat Movement and a prominent figure in the struggle for Pakistan’s independence wrote ‘Qatl-e-Hussain asl main marg-e-Yazid hai, Islam zindaa hota hai har Karbala ke baad’, how true that resonates in Pakistan. It is the Bhutto’s blood that overwhelms radicalism and despotism and brings democracy to Pakistan. In the jargon of these Yazed Taliban and their appeasers, saying ‘Ya Ali’ and ‘Jeay Bhutto’ is a transgression, but in reality, these catchphrases cleave apart the skies and will persist to echo in the universe till the end.

On this Muharram 10, let us reiterate to fight the Yazed within us that has claimed the lives of thousands of Pakistanis. None of us is Shia or Sunni. It is either Yazid or Husayn’s religion. Let us join hands to eliminate these terrorists for once and all. Following Husayn (AS)’s Islam is the only way to the continuation of Pakistan. The words of Josh Malihabadi wrap up the story of Husayn (AS) and Karbala: “Insaan ko bedaar to ho lene do, har qaum pukaray gi hamare hain Hussain” (Let humanity awakens and every tribe will claim Hussain as their own.)

The Nightingale of India, Sarojini Naidu beautifully placed Hazrat Husayn’s sacrifice very admirably in her poem:
“Black-robed, bare footed, with dim eyes that rain
Wild tears in memory of thy woeful plight
And hands in blind, rythmic anguish smite
Their blood stained bosoms, to a sad refrain
From the old haunting Legend of thy pain,
Thy votaries mourn thee thru’ the tragic night
With mystic dirge and meloncholy rite
Crying to thee Husain! Ya Hussain!
Why do thy myraid lovers so lament?
Sweet saint, is not thy matchless martyrhood
The living banner and brave covenant
Of the high creed thy prophet did proclaim
Bequeathing for the world’s beatitude
Th’ enduring loveliness of Allah’s name.”