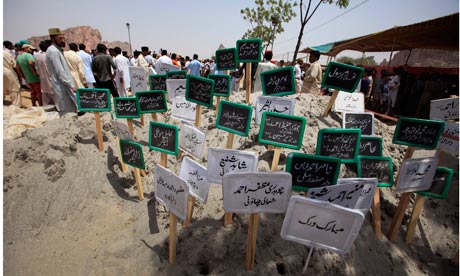 Within the last week, the third member of an Ahmadiya Muslim family in Karachi has been martyred by the Takfiri Deobandi terrorists of Sipah-e-Sahaba (ASWJ-LeJ, allied with Deobandi Taliban TTP). His killing is part of an ongoing wave of target killing of Ahmadiyya Muslims all over Pakistan and more specifically in Karachi.

“Mr. Bashir Ahmad Kiyani (70), was murdered as a result of religious hatred in Karachi. He was shot dead while on his way to Friday Prayer Services at the nearby Mosque in Korangi, Karachi. In the last three months both Mr. Kiyani’s son and son-in-law were also killed by Muslim fundamentalists. According to the details known, Mr. Bashir Ahmad Kiyani and an Ahmadi child was going to the Ahmadiyya worship place “Baitul Hamd” when unknown assailants opened fire at both of them. Mr. Kiyani received one bullet in the temple and two in the chest while the child was struck in the leg. They were immediately shifted to the nearest hospital where Mr. Kiyani succumbed to the injuries; the child’s condition is stable. Mr. Kiyani is survived by his widow and five children. His body was brought to Rabwah where a great number of citizens attended funeral prayers”

We all know that Pakistan’s corporate media is beholden to the ISI-sponsored Deobandi terrorists (aka Taliban and ASWJ-LeJ), and just as they have muffled the ongoing Shia Genocide in Pakistan, they have also been mute on the ongoing killings of the Ahmadiyya Muslim community.

In this deafening silence of acquiescence, where are the voices of Pakistan’s much trumped “alternative media”?

Why don’t they write blog posts, start hash-tags, participate in national and international campaigns to highlight the identity of the target killed and the killers?

Why are they hiding that more than 100 Ahmadiyya Muslims were massacred in two mosques in Lahore by none elese than Deobandi terrorists of ASWJ-LeJ sponsored by PML-N, ISI and Saudi Arabia?

If Shia Genocide can be obfuscated by misrepresenting it as “Iran-Saudi” proxy war, what about the continued killings of Ahmadiyya Muslims by the same ASWJ-Taliban nexus that also has the blood of Christains, Shias and Sunni Barelvis (Sufis) on its hands?

It is one thing to suck up to one another on social media and stifle debate so that no one is left out of the gravy train at the next Social Media Forum or Literary festival. It is one thing for Nadeem Paracha and Rumi to constantly praise pro-establishment pro-PMLN propagandist Najam Sethi on social media. But should this be at the cost of silence on the continued killings of Ahmadi Muslims? With his close connections to the Sharifs and with his promotion of ASWJ via The Friday Times blog (edited by Raza Rumi) and Geo TV, we all know why Najam Sethi and his cohorts will be silent against the repeated violence by ASWJ-Taliban against Ahmadi Muslims. Instead they are busy in promoting Deobandi clerics who openly spew venom against Shias, Ahmadis, Sunni Barelvis and Christians. Who has not seen the youtube clip in which a Deobandi cleric threatened Shahbaz Bhatti Shaheed, the same cleric was promoted as a prophet of peace by the TFT blog editor.

But what about the rest of Pakistani bloggers, Twitterati and social media activists? Where are their voices in the explicit condemnation of Deobandi terrorists of ASWJ-LeJ. It seems that it is not fashionable to condemn Deobandi terrorists in Pakistan’s self-proclaimed “alternative media”!