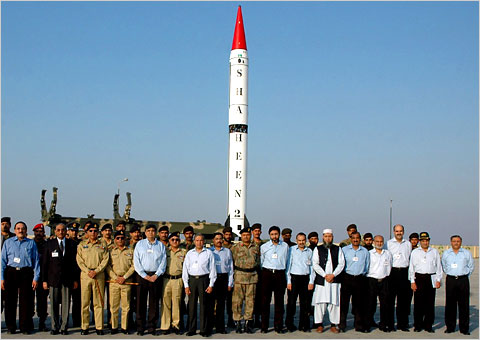 It has been reported in the International press that one of the topics on the agenda of the recent Nawaz Sharif- Obama meeting recently was Pakistan’s nuclear weapons program and within the broad ambit of this topic, Pakistan’s rapid development of battlefield nuclear weapons.

According to an article on October 22, 2013, in the Financial Times by Ahmed Rashid, “Western analysts estimate Pakistan has between 100 and 120 nuclear weapons, far more than its rival India, which is believed to have 90-100. Pakistan has multiple delivery capability, such as long and short-range rockets and aircraft. It will soon add naval capability with sea-launched missiles”.

So we have these types of people within the Pakistan establishment who can take “irrational decisions”.
Now India has stated clearly that any first use of nuclear weapons be they tactical or strategic would be met with the full force of a strategic nuclear response. Such a response would completely destroy Pakistan even if Pakistan is able to set off a few nuclear weapons of its own.

In any case millions of people would die. To me it does not really matter whether the greater casualties are on the Pakistan or the Indian side of the border. Humanity would be one step closer to extinction! So this is very dangerous stuff.

Then to top it all it is completely unnecessary. As I have tried to say many times, changed ground realities have altered the whole calculus of the Kashmir problem which is stated to be the “core issue” between Indian and Pakistan.
The situation on the ground has changed quite significantly since Pakistan’s Kashmir policy was first formulated in 1947.

Two major opinion surveys conducted on both sides of border in Kashmir over the period 2007-2010 have shown that less than 5% of the Moslem population of Indian Kashmir would like to join Pakistan. Likewise Pakistani Kashmiris do not want to join India. (References: (a) survey conducted in August 2007 and sponsored by media groups, Indian Express –The Dawn- CNN-IBN; (b) survey conducted in May 2010 by Robert Braddock – an associate fellow at the Chatham House, a think-tank in London).

It appears that the Kashmiris in Indian Kashmir are not as keen to join Pakistan as the Pakistani Kashmiris are for them to do so. Over time, the interests of the people of Indian Kashmir have become different from those of their brethren on the other side of the border.

With this changed situation the interests of Indian and Pakistan vis a vis Kashmir become very similar. India has always been unwilling to consider an independent Kashmir as an option Since even the Moslem Kashmiris in India do not want to join Pakistan, and the Pakistani Kashmiris do not want to join India, a division along the LOC, i.e. a formalization of the status quo, is in the best interest of both India and Pakistan.

This should be the primary thrust of Pakistan’s policy, not because it is the best deal that it can get, but since the alternative is not in its interest.

Now the above surveys also showed that Indian Moslem Kashmiris do want independence, essentially to get rid of the alleged Indian suppression there.