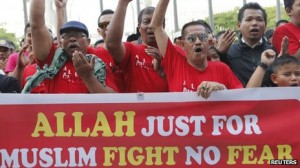 For the past several years, Malaysia, a Muslim state has been harassing and discriminating Shia Muslims so much so that the local converts to Shia Islam as well as Expatriates belonging to that sect have been served legal notices that they can no longer practice their faith in Malaysia, and any violation of that ruling will subject them to severe hardship and imprisonment. Shia Muslims, therefore, can not have a place of worship for themselves, nor can they openly organize and observe their religious activities during the Islamic months of Moharram and Safar. In order to ensure the safety and survival of Malaysian Shia Muslims, and to avoid any retaliation by the Malaysia’s Salafi leaning regime, this information was never publicized on a large scale.

Now the Malaysia’s Salafi hammer has struck the people of other faiths that constitute a significant segment of that country’s population. Even though this country claims to be the adherents to Maliki & Hanafi schools of thought, Saudi Arabia in collaboration with Mahatir Mohammad, Malaysia’s xenophobic and Wahhabi former Prime Minister, started exporting the Salafi ideology to this land. These Malaysian judges neither have the credentials nor the credibility to concoct a ruling of such scope and magnitude. Jam’aa Al-Azhar in cairo, Egypt or the Islamic Seminaries in Najaf, Iraq and Damascus, Syria, are only those most ancient and powerful institutions of Islamic jurisprudence that have the ultimate authority to render judgment on a matter of this nature.

Indeed, the most beneficent and merciful word “ALLAH” belongs to all faiths at all times !

BANGKOK — A Malaysian court ruled on Monday that non-Muslims may not use the word “Allah” to refer to God, the latest decision in a long dispute that has polarized the multicultural country.

The decision, by a panel of three judges, was intended to protect Islam, the country’s official religion, from conversions.

“It is my judgment that the most possible and probable threat to Islam, in the context of this country, is the propagation of other religions to the followers of Islam,” the chief judge, Mohamed Apandi Ali, said in the decision, according to the news Web site Malaysiakini.

The Malay language is infused with Arabic, and while 60 percent of the population is Muslim, Malay-speaking members of other monotheistic faiths in the country often use Allah to refer to God.

Monday’s ruling overturned a 2009 judgment that allowed a Catholic newspaper, The Herald, to use Allah in its Malay-language newspaper.

The use of the word Allah “is not an integral part of the faith in Christianity,” the chief judge said. “The usage of the word will cause confusion in the community.”

Non-Muslims in Malaysia, where religion, ethnicity and politics are tightly intertwined, reacted with anger.

Jagir Singh, the head of the Malaysian Consultative Council of Buddhism, Christianity, Hinduism, Sikhism and Taoism, called the decision “appalling.”

A senior politician and former government minister from East Malaysia, which includes the heavily Christian island of Borneo, criticized the decision.

“The word Allah is being used by Christian communities in Indonesia and the Arab world,” the politician, Bernard Dompok, was quoted as saying in the Malaysian media. “Why should Malaysia be any different?”

The Rev. Lawrence Andrew, the editor of The Herald, said he would appeal the decision to Malaysia’s highest court.

“We are greatly disappointed and dismayed,” he was quoted by The Associated Press as saying. “It is a retrograde step in the development of law in relation to the fundamental liberty of religious minorities.”

But the decision was supported by Muslim organizations that have used the case to rally support.

One group, Ikatan Muslimin Malaysia, said those who disagreed with the decision could emigrate.

“They can always choose to move to another country if they can no longer accept the supremacy of Islam,” Abdullah Zaik Rahman, the head of the group, said in a statement on the group’s Web site.

The Allah dispute is only one of several thorny questions that have created rifts between the country’s Muslims and its minority religious groups, especially Christians and Hindus. Questions about mixed marriages, conversion and apostasy have all raised tensions in recent years.

Malaysia’s Constitution says, “Islam is the religion of the federation but other religions may be practiced in peace and harmony.”

Most of the country’s top leaders are Malay Muslims. Monday’s decision is likely to be popular within the ruling party, the United National Malays Organization, but not among its more diverse coalition partners. Paradoxically, the leaders of the country’s main Islamist party, Pas, have repeatedly said that Christians and other non-Muslims should be free to use the word Allah.