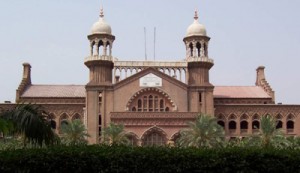 As a Pakistani I keenly anticipate the truly happy days we rarely get to enjoy. For instance, my heart goes all aflutter when I hear that the Wukala Mahaz Barai Tahafaz Dastoor (hereinafter ‘The Lawyers’ Front for protecting the Constitution’ or simply ‘the Front’) has been spotted stealthily approaching a court. Oh what joy!

I must confess that I am a big fan of this league of extraordinary jurist-gentlemen for the following reasons: with matchless initiative and gallantry and thus without being requested or coerced by anyone, they have offered themselves to be the uber protectors of the Constitution; their collective vision routinely transcends inconvenient limitations on thought and action — such as legal theory and the law; time and again, they have demonstrated their ability to overrule the apparent and to look beyond the obvious; and, they have proved that nothing whatsoever — not even the Constitution — can deter them from serving the Constitution.

Once again seeking to go where no lawyer has gone before, the Front approached the judiciary for a few very simple and straightforward things which could help everyone sleep better in a country of sleepless nights.

Their plea was that the court, inter alia, ought to: (a) ‘direct’ the Federation to ‘command’ the armed forces to defend Pakistan against US aggression; (b) issue an ‘authoritative declaration’ that the US is an ‘Enemy State’ and undertake all measures under domestic law to demonstrate the same, such as the shunting out of US diplomats and the seizure of its assets (I suspect as maal-e-ghaneemat or kosher war booty); and (c) after making a determination whether our nuclear arsenal is actually a threat to our ‘survival’ and incapable of protecting us (I believe this determination was expected of the court), should it turn out to be a liability rather than an asset, direct the federation to sell it to the highest international bidder or request Iran to keep it safe for us.

The last one is an ingenious prayer for it combines astute understanding of the international political economy of nukes as well as warm brotherly feelings for fellow Muslim nation Iran. To my surprise, it did not also request for a court appointed auctioneer for this sensitive task — surely the federal government cannot be trusted — and indeed also a sensible reserve price for your average nuke. Perhaps, it did not ask because these mechanisms are so obviously necessary. And the Front is invariably and valiantly disdainful of the obvious.

To its fans’ utter shock and heart burn, back in 2009, the Lahore High Court had refused to entertain the petition. The Intra-Court Appeal was similarly unsuccessful.

However, one has come to admire the Front’s remarkable fortitude which enables it to forgive and forget misfired petitions and expeditiously start contemplating the next one. Undeterred and riding on the crest of our collective hopes and prayers, the Front then approached the apex court. This was a somewhat awkward situation as the apex court also deems itself to be the custodian of the Constitution, despite the Front’s zealous claim to this august role.

In view of what happened next, all I can say is that I was rather crestfallen. A learned bench of the Supreme Court refused the leave to appeal and dismissed the petition for lacking in merit. Consequently, I ‘wandered lonely as a cloud’ for some time. Well-coached as I was to do so in high school, whenever the situation demanded.

I braced myself to read the court order. It said that since the issues raised in the petition were relatable ‘to matters of foreign policy, defense and security of the country’ they were neither ‘justiciable’ nor did they fall within ‘the judicial domain for interference under Article 199 of the Constitution’. It occurred to me that the Front ought to have approached the Court in its original jurisdiction under Article 184 (3). After all certain other cases, most notably the Memo Case, which involved very similar issues, had been found justiciable under that provision. However, the verdict had left no further room to maneuver.

In its order, the apex court had not just found Article 199 inapplicable but the issues raised were declared to be non-justiciable per se. Furthermore, it had also stated that any judicial interference in the same would violate the founding principle of separation of powers enshrined in the Constitution.

Now I am a Law 101 kind of a bloke with little aptitude for anything deeper. However, I can Google as brilliantly as the next person. I double-checked whether my admiration for the Front was misplaced. It was not, for it is a collective of great pedigree. Whenever the Federation unleashes turmoil and chaos on its own unsuspecting public, the Front is there for you. Indeed, it has carried on in the tradition of insufficiently-glorified heroes such as the Al-Jehad Trust, the Watan Party and certain other court birds acclaimed for their petitioning prowess. Maybe they are all the same person but how would I know? All I know is that they/he/it are ever awake and perpetually petitioning so that the rest of us can sleep easy.

Ah the very nobility of the idea. Goose pimples stuff!

But then there are always spoilsports. Someone I know said today she was delighted with the Supreme Court’s decision. Good grief! She thought the apex court was perhaps moving towards adopting a clear stance on dubious petitions that distracted the judiciary into political quagmires and contentious policy issues that cannot be resolved through legal judgments. She blamed certain attention-seeking lawyers for constantly wasting precious court time through frivolous cases or as dummy fronts for covert agendas — obtuse and incessant ‘like drones,’ she described them. She gave many past examples.

And, then she went on and on about legal theory and other such complicated stuff, the need for judicial restraint, and selective intervention in matters involving complexly intertwined constitutional and political dimensions. Blah, blah and more blah!

She reads a lot of dry stuff and I think it has addled her mind for she also said that the excellent court order will deter other such adventurers. Hah! Little does she know how steeped the Front is in adventure; and how unflappable. A reliable source (i.e. my heart) tells me its next petition will boldly question whether the Supreme Court even has the power to decide the fate of its petitions, given that the Front is the asli, genuine and original custodian of the Constitution. For can there be two swords in one scabbard?

You should have seen her face when I asked her that.

The author is a legal academic. His latest book is Pakistan’s Experience with Formal Law: An Alien Justice (Cambridge: Cambridge University Press, 2013)