In a controversial move that has drawn much criticism, the PPP Government in Sindh province has proposed a 3-month ban on popularly used communication applications like Skype, Whatsapp and Viber. The reasons stated for this ban is to deter the easy communication between terrorists -who are almost exclusively Deobandi militants of Taliban (TTP), Sipah-e-Sahaba (LeJ-ASWJ) and allied groups (Jundullah, Jaish-e-Muhammad etc)

After this proposal was released to the media, a firestorm of criticism erupted.

One criticism is that this is being done to boost PTCL’s declining revenue. The argument given was that advanced communication applications had made phone calls and texting free. While this argument has merit, some of these applications have existed for over half a decade and if declining revenues was the only reason, then they could have been banned long ago.

The Sindh Government’s proposal claims that this ban is necessary during a sensitive time frame to deter terrorism. This in effect is capitulation and not an effective counter terrorism policy. While the PML-N and PTI have clearly shown their pro-Taliban bias, the PPP has shown its weakness by not stating a counter terrorism policy. It has chosen the path of capitulation when a more intelligent and bold approach to countering Takfiri Deobandi terrorism would have galvanized the province and nation to support it.

Still, the PPP leadership could have made a better case for a policy whose merit is at best questionable.

Instead of doing that, the PPP chairman Bilawal Bhutto Zardari made a comment that was both insensitive and un-called for. Here is Bilawal’s tweet: 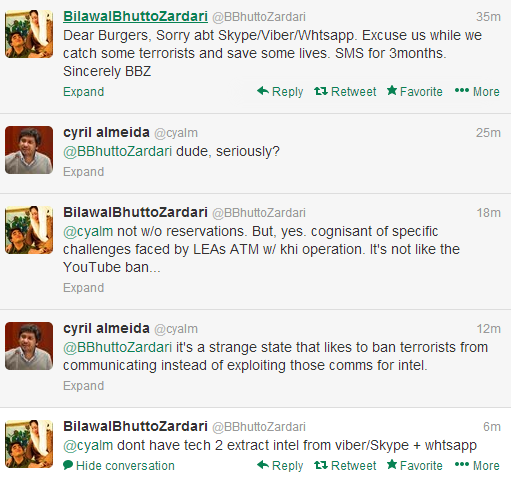 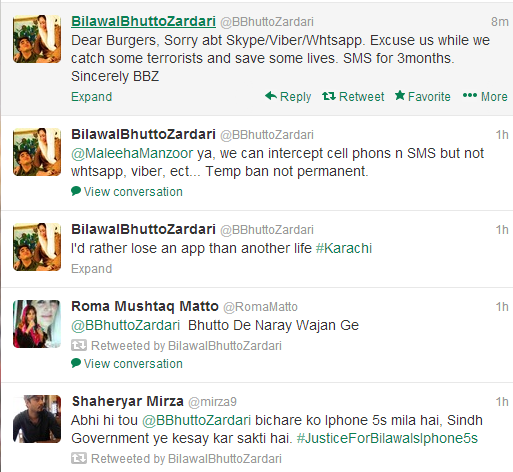 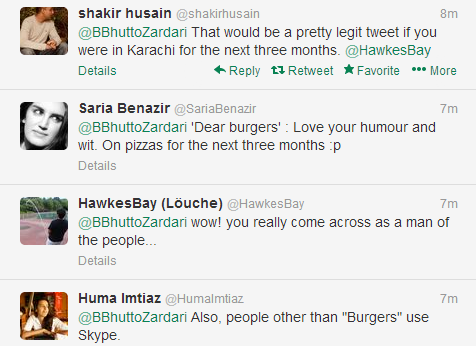 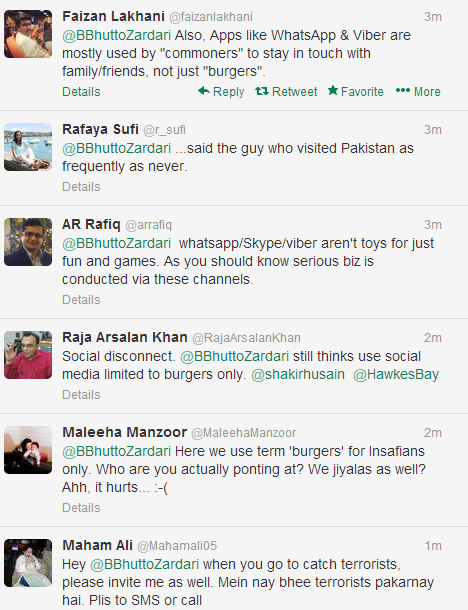 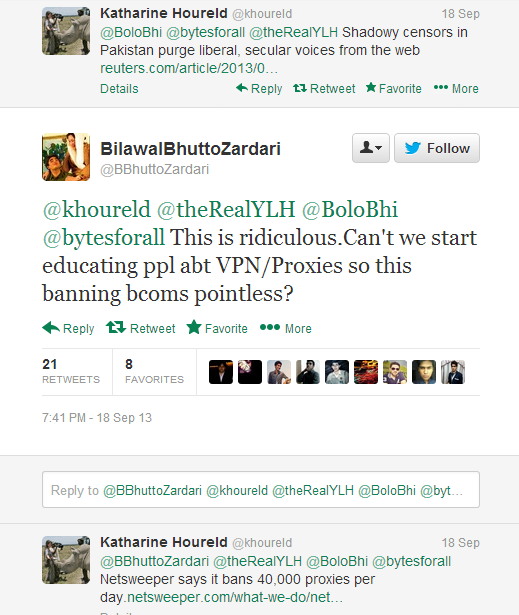 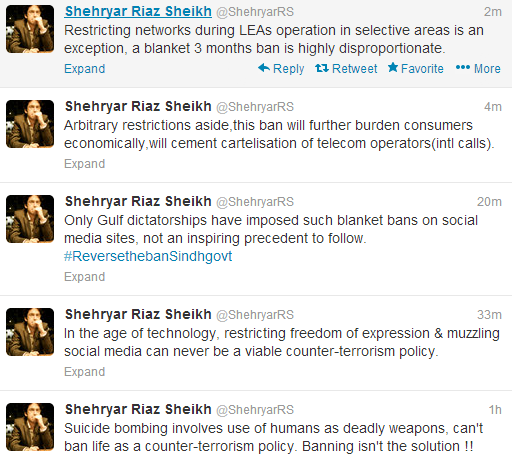 The “burgers” or the educated middle classes are a huge constituency that PPP should not give up on. Bilawal should know that the “burgers” don’t just use Skype for frivolous purposes. This application is a crucial communications application and banning it would be damaging for most businesses. The PPP chairman’s tweet is a sad reflection of the party’s declining prospects. 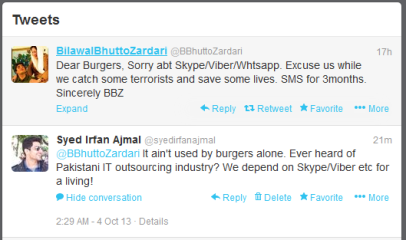 It also highlights the poor advice he is getting from unscrupulous media opportunists who have undermined the PPP at every turn. Instead of relying on PPP loyalists who have stuck with the party through its hardest times, Chairman Bilawal is increasingly wasting his time and and undermining the PPP by patronizing compromised sellouts like the Cyril Almeidas, Raza Rumis and Sherry Rehmans.

Chairman Bilawal should know that Sherry Rehman mocks him in private gatherings and highlights his inability and unwillingness to take charge of PPP. Same can be said about Raza Rumi / Najam Sethi duo who continue to publish ill-inteded rumours in The Friday Times blog about Bilawal’s differences with his father Asif Zardari.

While the PML-N and PTI have been exposed as pro-Taliban and incompetent, the PPP has a golden opportunity to wrest back the initiative and take charge. Instead, the PPP chairman chose to defend an indefensible and punitative policy whose merit is deeply questionable. More than his defense, it was the immature and insensitive tone that he chose to do so.

While sincere and talented loyalists of PPP (eg Mr Shiraz Paracha) continue to leave the party heartbroken, the Chairman continues to listen to those who clearly do not have the best interests of the party.

It is true that Pakistan’s urban middle class had rarely supported the PPP. They should be critisized for their reactionary attitudes and selective standards. However, for a leader to use pejoratives like the term “burger” is clearly not the way to go. While one must also condemn the racist criticism directed towards the PPP (in reference to the Sindhi topi remark), one must also condemn the PPP chairman for a naive and insensitive remark that is completely not in keeping with the party’s history of being attentive to the masses.

While some may choose the path of flattery to get into Bilawal’s circle while continuing to undermine the PPP, LUBP will offer blunt and clear criticism of senseless policies.