Home  »  Newspaper Articles   »   Imran Khan is no ‘apologist’, he is an ‘advocate’, an ‘ally’ of Deobandi Taliban – by Saroop Ijaz 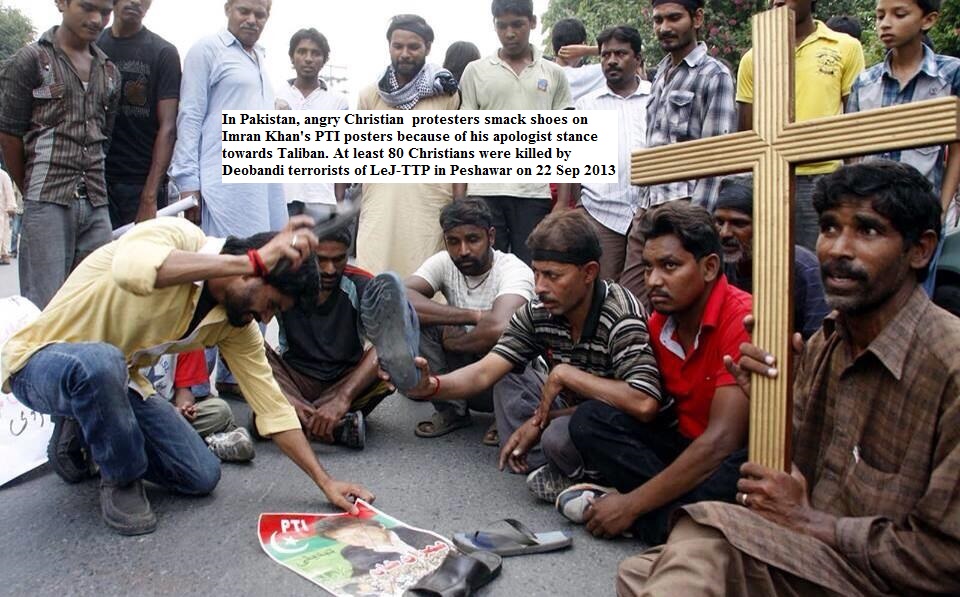 In October, 2001, a church in Bahawalpur, Punjab was attacked (by Deobandi terrorists of Lashkar-e-Jhangvi) and worshipers killed, including women and children. The date bears relevance; it came days after the United States started the operation in Afghanistan. Before that, when the Babri Mosque episode took place, historic Hindu temples in Lahore were ransacked. There are various other examples; however, the seminal point is that the Hindus living in Pakistan represent India, the Christians are agents of the West. Going to Joseph Colony almost immediately after the attack and talking to those who used to live there, one could observe not only the smell of evil, the sound of death but also unspeakable hopelessness. Try imagining a sewerage worker, whose father was also a sewerage worker and who now knows to a moral certainty that his newly born grandson will also be a sewerage worker. Yet, after every attack for a day or two we pretend that they are Pakistanis too (Ahmadis are denied this small consolation even). They are not.

The murder in the Peshawar Church is what mass murders are, horrific and barbaric, however, was it unexpected? The K-P chief minister does not know of the Taliban. He also believes that Muslims should not be allowed to be sanitary workers; his later clarification was that he wanted Christians to retain their ‘traditional’ jobs. So, they are weak enough to only be sanitary workers, yet, formidable enough to be held accountable for Western imperialism and drones?

To call Mr Imran Khan a Taliban and a murder apologist offends his enthusiastic supporters. Perhaps, they are right. Hearing him talk after the Church attack, it is clear that Mr Khan is no ‘apologist’. An apologist makes excuses, often in an oblique manner for the acts of another, after the commission of the act. Mr Khan does no such thing. He is crystal clear in his absolute defense of the terrorists. And more importantly, he pre-approves of all future murderers. Mr Khan is no ‘apologist’, he is an ‘advocate’, an ‘ally’. Whether he does it out of fear or a single digit IQ no longer matters, he is for murder in the name of faith. His vision of ‘Naya Pakistan’ has the Pakistan Tehreek-e-Insaf (PTI) as a political wing of the non-corrupt Tehreek-e-Taliban Pakistan (TTP). Mr Khan, if there is a conspiracy against peace in this country, you sir are the public face of it.

The Punjab government has taken up the ‘heroic’ task of fighting the teaching of ‘comparative religion’ in the curriculum. Our estranged brothers TTP, and the not so estranged Lashkar-e-Jhangvi, are hard at work to make sure that there is no other religion (at least followers) left in Pakistan to compare to. The Punjab police recently demolished minarets of an Ahmadi mosque, how dare they pretend to be Pakistanis? Mian Sahib apparently seems to be reconsidering his position on talks. If possible, Mian Sahib should avoid trips to Saudia Arabia while he takes his sweet time on the question.

All parties have shown weakness in tackling terrorism, however, some significantly more than others. The ANP has Shaheed Bashir Bilour, the only son of Mian Iftikhar’s and many others, the PPP has the ultimate sacrifice of Shaheed BB, and Shaheed Shahbaz Bhatti and Salmaan Taseer. The Christians killed while worshiping the Lord are not ‘Shaheed’ in the land of the pure. They died the mundane death, not part of any greater fight.

The arguments for talks and for terrorists are fit for children below the age of 10, with learning difficulties. The ‘force should not be used to counter force’ argument would make the prison system, the courts and the police redundant. The entire justice system would be shrinks sitting down with murderers and rapists, talking.

The worst offender is Mr Khan and his worst offense is that he is creating the space for a pro-terrorist narrative in the mainstream. Perhaps, more accurately, he is destroying the limited space that existed for the counter narrative.

The only APCs that we need now are better Armoured Personnel Carriers (APC) to help us get on with the job. In the presence of a democratically elected Parliament any other APC is a joke, so is consensus. A majority resolution of the Parliament if and when, is all that is needed.

Our words of condolences and outrage are hollow, up to the point we can create enough pressure to act. One would have urged the Christians and Hindus to leave this country in the interim. However, you know what hopelessness is? Pervez Khattak’s ‘sanitary workers’ do not have the resources to get a passport, let alone afford travel. We run an inescapable prison and kill inmates for pleasure and piety. Mr Khan wants to be the warden.

“Pakistan Tehreek-e-Insaf (PTI) chairman Imran Khan said on Monday that if peace talks are to be given a chance, the people who are dedicated to an agenda of violence should be separated from those who are willing to call a ceasefire.”  http://tribune.com.pk/story/608231/terrorists-should-be-separated-from-those-ready-for-peace-talks-imran-khan/

So are those TTP (Taliban, ASWJ-LeJ) members who are pro-peace condemning this violence? How can Khan say that there are indeed some TTP members that are pro peace? How will you identify the people are against violence? How will you implement limited ceasefire which is only directed towards the peaceful TTP elements while directing force of the state towards the violent elements? Or according to you TTP can continue to attack Pakistan and its citizens without implementing any ceasefire but make an excuse that the attackers were a small group who did not want peace while every else wants peace. Since the government cannot separate out the pecemongers from the violent ones, the government should have a blanket ceasefire.

Truly, Mr. Khan has perfected his apologist stance and sadly, the blind sheep who follow him cannot see the obvious flaws in logic. As an Indian even I am shocked at the needless slaughter of innocent Pakistanis where there is no response whatsoever from the state to the murderous killers.

How can such a top notch sportsman and a wonderful philanthropist have such a big blindspot?

“Nothing justifies the targeting of innocent people and their places of worship. This is against the spirit of Islam,” the statement said.

Then how does talking to those who are ‘ready to talk’ now but targeted innocent people in the Pakistan justified?

What about your ‘Truth and Reconciliation Commission’ theory during NRO days?

You need to know the truth behind corruption but not behind bloodshed?

Will those sitting on the table tell us with whose money they killed so many civilians in the past?

Can the group that did Sunday’s killing get your ‘instant immunity scheme’ if they are ‘ready to talk’ ?

Mr. Imran Khan, you still do not understand – you can not talk of peace with those who refuse to put down their arms and indeed think they are stronger because of such futile offers. The horrific tragic results are there for all to suffer. Make no mistake, all the Taliban kill, train to kill. Open your eyes to reality, you are not playing cricket, these are human lives. Each one lost a shame on KP authorities and Pakistan. Furthermore, on TV news it has been stated children burnt and wounded terribly in this infierno are not receiving adequate treatment as the hospitals of Peshawer do not have the know how, medicine or burn units. Can the KP government not have these children transferred to hospitals in Islamabad (PIMS has a burn unit), Lahore or elsewhere to give them a chance to survive, and lessen their terrible suffering? Showing up in Peshawer for a few hours to make statements is far from adequate.

This is not leadership. A true leader when faced with reality admits the mea culpa and offers alternatives that rectifies the mistake. Imran Khan’s mistake has been his failure to realize the true depths of Taliban’s moral bankruptcy. He has mistakenly assumed that all evil flows from the American involvement in Afghanistan, and once the Americans leave everything will be hunky dory. Now that he is seeing the facts that Taliban has no moral compass and do not desist from butchering innocent, poor, and dispossessed people, which is what the indigenous Christian community of Pakistan represents, to make their false political point, Imran Khan is changing the tune to now support the ‘good’ Taliban. Please come clean. You have taken some good stands and your persona is clear of the dirt of corruption. You can lead but not until you are honest. Honesty demands that you speak against bloodshed and butchery.