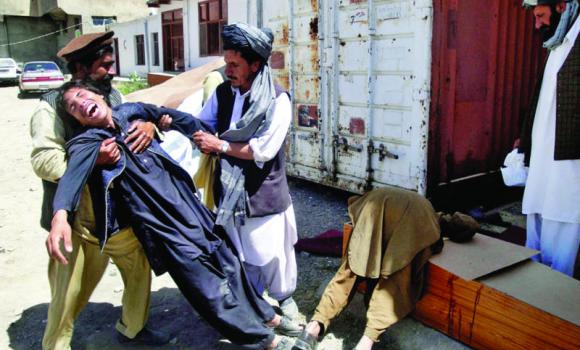 HERAT, Afghanistan: The Afghan Taleban executed 13 Afghan workers in two provinces after accusing them of working for the government, officials said on Tuesday, the latest in a series of brutal attacks on civilians this year.
The Taleban are increasingly targeting civilians seen to be cooperating with the government, raising concerns about the prospects for peace after most foreign troops pull out next year.
President Hamid Karzai condemned the killings with a swipe at Pakistan, which he has been visiting for two days.
“The killing of innocent engineers and workers shows that the Taleban and their foreign masters want Afghanistan to be a impoverished and underdeveloped country forever,” he said in apparent reference to Islamabad, among others, which he has often accused of playing a double game in the 12-year-old war.
Karzai on Monday stressed the need for Pakistan’s help in arranging peace talks with the Taleban in a meeting with Pakistani Prime Minister Nawaz Sharif.
In Herat, one of Afghanistan’s most stable provinces whose small but promising private sector is driving the national economy, the Taleban kidnapped and killed four engineers and two workers on Sunday, Governor Fazlullah Wahidi said.
The men, four engineers and two trainers and all Afghan, worked for a World Bank-funded program created by the Karzai government that aims to improve local project management.
“We had gathered some elders to meet the Taleban to tell them that they … worked for everyone in the country, but the Taleban killed them before they arrived for negotiations,” Wahidi said.
The killings came within hours of the discovery of the bodies of six Afghans in the restive eastern province of Paktia. The six, all drivers, were killed by Taleban because they were working with the government, deputy provincial governor Abdul Wali Sehee said.
Elections are expected to be held in Afghanistan in April to replace Karzai, who came to power in 2001 after US-led forces toppled the Taleban.
Taleban executions of workers associated with the Karzai administration or the international community are not rare, but recent attacks have typically occurred in the restive eastern and southern parts of the country.
About two weeks ago, eight people who worked for Afghan security forces were executed in violent Ghazni on their way to Kabul by bus.
Meanwhile, security officials say Pakistani Taleban fighters have attacked an army camp near the Afghan border, killing at least one soldier.
The officials said Tuesday that four militants tried to enter the camp in Pakistan’s South Waziristan tribal area around midnight, triggering a shootout with soldiers. Three militants were shot and killed and the fourth, wearing an explosive-rigged vest, blew himself up.
There were conflicting reports about the death toll. One set of security officials said one soldier was killed, while another said two soldiers died and nine were wounded.

The officials spoke on condition of anonymity in line with military policy.
A Taleban spokesman, Asimullah Mehsud, claimed responsibility for the attack.