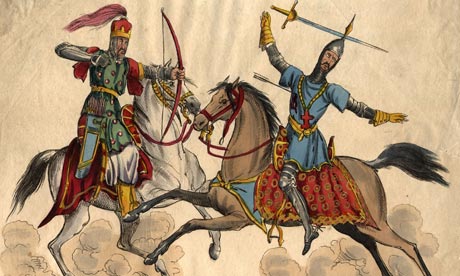 “Today we shall read about one of the best Islamic kings of indo-pak; Mahmud Ghazvani, the Idol Breaker” our teacher said.

Yes, as a history lover I was waiting for our Urdu teacher to start that chapter, was very excited.

“Mahmud came to India at a time when Muslims of Indo-Pak were going through tough times”, our teacher started. “Islamic Govt. established by Muhammad bin Qasim had been taken over by the Hindus and in order to regain their old glory they were torturing Muslims”. “Brahmans, the upper caste, were using all their influences on local rulers to relegate Muslims to the status of untouchables or Shudras”.

“But, Allah has His own methods of taking justice! He brought Mahmud upon those infidels like a scourge to take revenge of their oppression”. “And revenge he took; Mahmud invaded India 17 times and in his last attack conquered Somnath and broke the idol of most revered Hindu god”. “Whatever treasure Mahmud ‘got’ from India was utilized to build Ghazna as a great Islamic centre”. “Apart from being a fierce warrior Mahmud was a great patron of scholars and arts; there were times when he used to pray together with his slave Ayaz, hence promoting Islamic equality”.

Teacher went on and on but that much was enough for me to start idolizing the great servant of Islam! What a man fighting for Islam and treating his subjects equally and with kindness.

Robbing a rich Hindu Mandir like Somnat is no big achievement to boast about. It would have been better if they had talked about the valour of their people in defending their homeland. I could not help thinking about it.

US had attacked Iraq and we, student wing of a religious party which I joined on my father’s behest, were protesting against it at Karachi press club. While returning my senior came-up along with our mother party leader:

“When is your bachelors finishing, Waseem”? he asked

“bhai next year”, I replied

“see, you are a brilliant student and we foresee good future for you. It can be better if you go to States for your higher education, we will talk to your father”.

“bhai States, but why..??!! we are here protesting against it and you are asking me to go there for my education..!!” I was shocked to say the least.

“beta”, political leader said this time. “We require people to spread our stance, our position, to the world so that they may know the reality. See how America is spreading lies against Muslims using its media, we want to do the same but for truth, for Islam”. “You will be our man in enemy territory, which is far more difficult and rewarding than fighting in a war field”.

“Talking about lies do you think Iran and US are enemies”?

“No!! Iran is US’s biggest ally in the Middle East after Israel, they are staging a drama. Truth is by using Iran, US is selling its weapons to our mid eastern countries and filling its pockets”. “If Iran is an enemy then why not Israel attack it?? It has already attacked other Arab countries several times, isn’t it so”?

Didn’t know what to say, I lowered my head.

On our way back I was given a crash course on Iran-US/Israel friendship. Though I was not that much into Shias, my liking for Iran was only because of its anti-US position which was dealt a severe blow that evening.

Next day both of them, my senior and pol leader, visited my home. My father has had good rapport with that religious party people and it was a norm for them to come to our place hence I was not surprised. After initial salutations they raised this topic of me going to states for higher education but this time I tried to retaliate.

“See you are like a kid brother to me, do you think I will advise something bad for you”? “sometimes we have to take difficult decisions for the betterment of Ummah, Allah has given you a talent now use it for Islam”. That was it!

Having done my bit in US (in fact more than a bit), I was asked to return. With my qualification and experience getting a job in one of the biggest media centers was a piece of cake. Instead of print media I choose electronic media because that’s where you can really drive home your point(s).

Agenda for my return was to:

Initially I was doubtful of achieving my goals. I had heard too much about free/ fair media and was uncertain whether I would be allowed to work as per my plans.

But to my relief found out that most, if not all, media bigwigs were working for others’ agendas, be it secret agencies or religious outfits. No one was telling the truth. Facts were twisted to create confusion in the minds of the people and then well thought out pre-planned conclusions were enforced upon the viewers.

As a guinea pig people of this Islamic Republic were tested with different (conspiracy) theories, just to get their taste. Theory getting most hits would be tried with different flavors till public interest died out. Then another theory would be advanced, starting a vicious circle. People have been made to believe that whatever told to them was nothing but TRUTH and that they should accept it without any probing questions.

So my dear countrymen whenever you notice twisting of facts rest assure that a journalist like me is working on it!