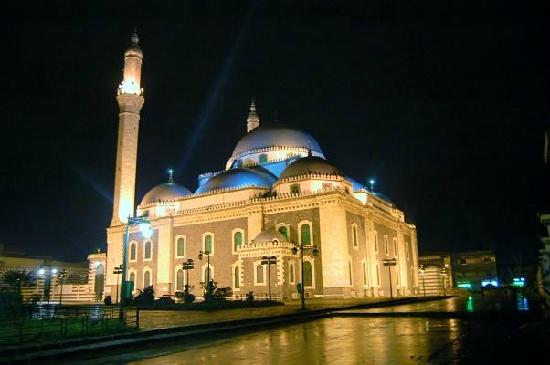 Here’s a latest footage of attack by Takfiri Wahhabi Deobandi terrorists on the Masjid and Tomb of Hazrat Khaid bin Waleed (r.a.) in Homs, Syria. Khalid bin Waleed died and was buried in 642 in Emesa, where he lived since his retirement from military services. His tomb is now part of a mosque called Khalid ibn al-Walid Mosque. Khalid’s tombstone depicts a list of over 50 victorious battles that he commanded without defeat (not including small battles). 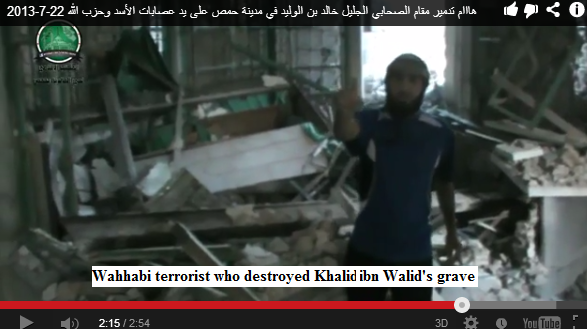 Wahhabi Deobandi terrorists of Al Nusra Front (Al Qaeda) killed the Sunni Sufi trustee and administrator of the Khalid ibn Walid’s mosque and shrine, used the shrine as their weapon depot and detonated part of the shrine containing Khalid ibn Walid’s grave levelling it to ground according to the Salafi Wahhabi practice in Saudi Arabia. According to Salafi Wahhabi and Deobandi beliefs, construction of shrines or big graves is not allowed in their version of puritanical Islam.

According to Saudi-influenced Wahhabi media (Al Arabiya, Al Jazeera, and also foreign agencies relying on FSA/Nusra/Wahhabi sources, part of the Khalid ibn Walid mosque was also damaged due to Assad regime’s military action against FSA-Nusra terrorists hiding in the mosque, using it as a military depot. The misledaing “report”  on Khalid ibn Waleeed mosque by @etribune @AFP http://tribune.com.pk/story/580314/army-shelling-destroys-historic-syrian-shrine-ngo/  is based on propaganda by this so called “NGO” (Syrian Observatory for Human Rights) https://lubpak.com/archives/276933  #KhalidIbnWalid 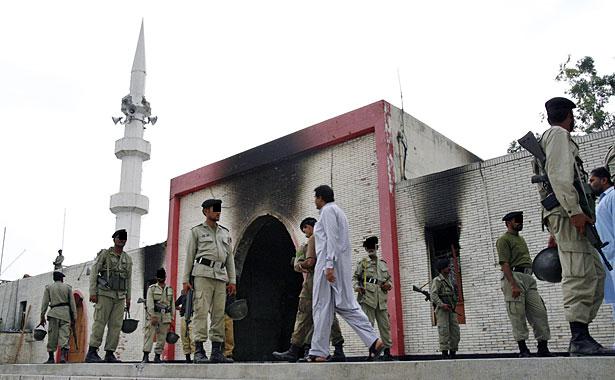 In 2009, Hamas government in Gaza took action against Salafi Wahhabi terrorists hiding in a mosque killing at least 21 of them including their leaders. In August 2009, Hamas raided on a mosque in Rafah, where armed Salafis belonging to a group called Warriors of God had gathered. The group’s leader, Abdel-Latif Musa, had proclaimed an Islamic emirate in Gaza, directly challenging Hamas rule. Mr. Musa Salafi and 21 other people, including six civilians, died in the raid.

Previously in April 2013, Wahhabi-Salafi and Deobandi terrorists in Al-Raqqah, Syria destroyed the grave of Hazrat Ammar ibn Yasir (r.a.), one of the earliest Muslims and closest companions of Prophet Muhammad (pbuh). http://www.presstv.com/detail/2013/03/12/293239/militants-destroy-muslim-shrine-in-syria/ 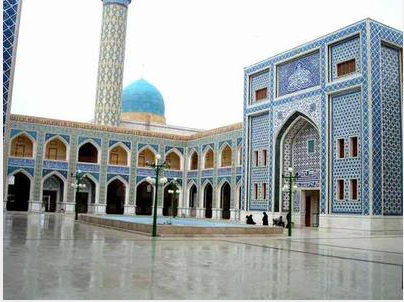 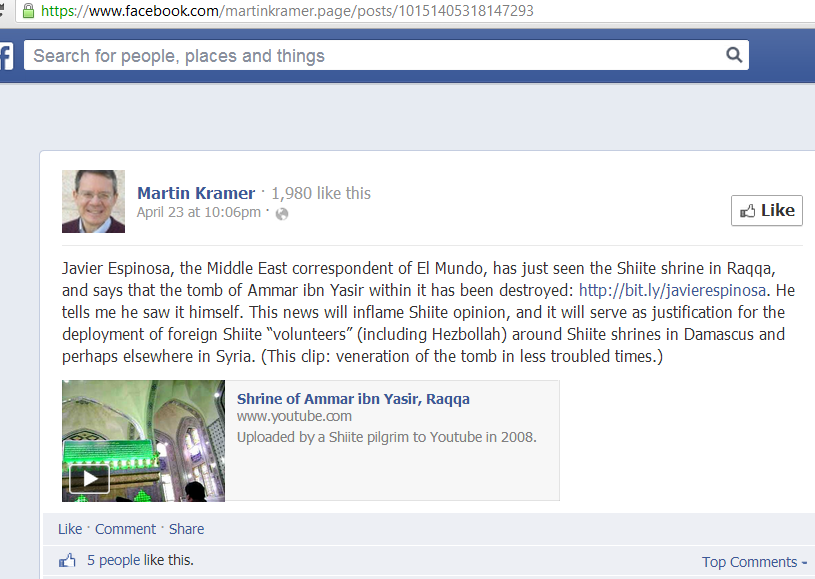 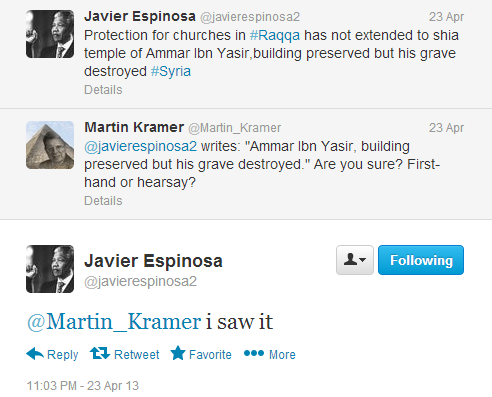 In May 2013, Wahhabi Deobandi (Takfiri) terrorists in Syria also destroyed the shrine of a great Sahabi Hazrat Hujr ibn Adi (r.a.), dug his grave and took his sacred body with them.

On this link you can see Photos of the Free Syrian Army Wahhabi agents who destroyed the grave of the Sahabi, Hujr ibn Adi: 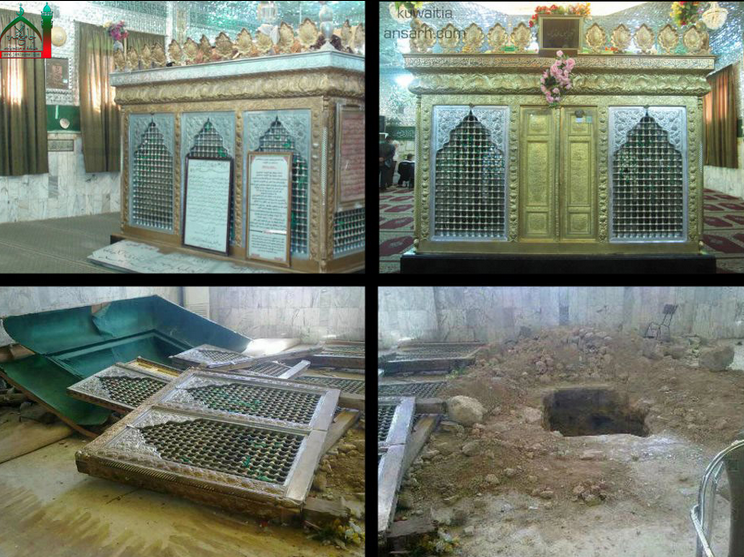 Currently, Takfiri terrorists of Al-Nusra Front (Al Qaeda) and Free Syria Army (FSA) want to destroy the tomb (in Damascus) of Sayyeda Zainab (s.a.), granddaughter of Prophet Muhammad (peace by upon him). 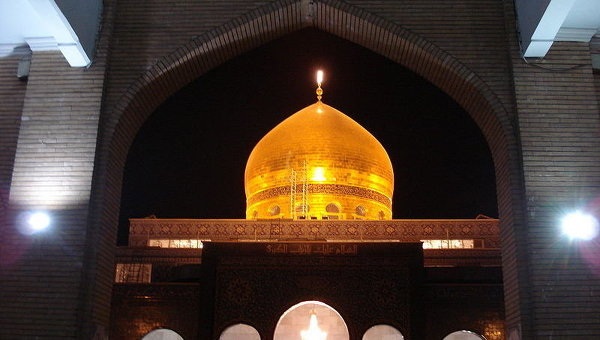 According to religious ideology of Wahhabis/Salafis and Deobandis, it is forbidden to build tombs or large structures on graves. After conquering Makkah and Madihan, Wahhabi Salafist rulers of Saudi Arabia destroyed and levelled tombs of Hazrat Imam Hasan, Hazrat Usman, Hazrat Imam Jafar Sadiq and other respected members of Ahle Bait and Sahaba at Jannat Al Baqi’. 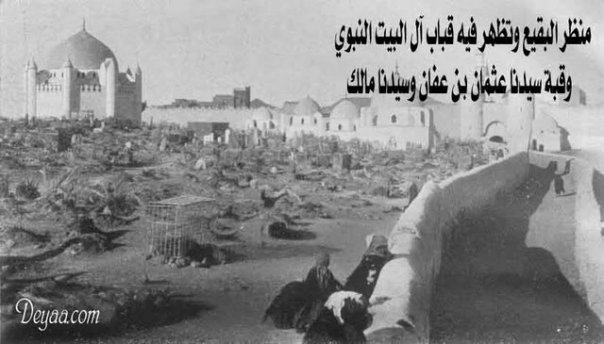 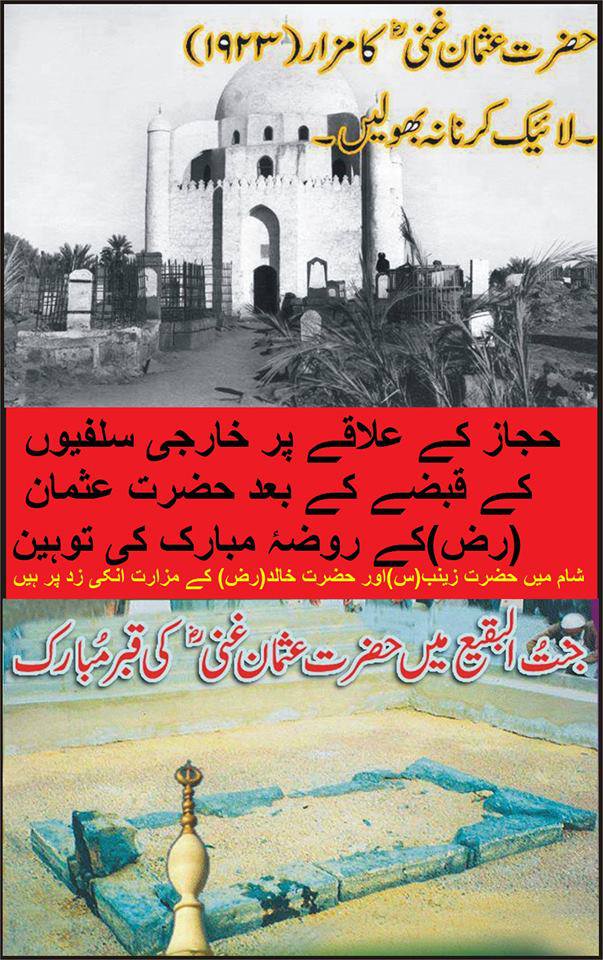 In a bid to deflect the world’s attention from Wahhabi Deobandi terrorists attack on Prophet Muhammad’s granddaughter Sayyeda Zainab’s tomb in Damascus, Al Qaeda / Taliban apologists are alleging that Assad regime or Shias destroyed Khalid bin Waleed’s mosque and grave in Homs. Apologists of Wahhabi Deobandi terrorists of Al Qaeda (Al Nusra) and Taliban in Pakistan are alleging that Khalid ibn Walid’s mosque was destroyed by Assad regime. Some of them including Jamaat Islami activist Ibrahim Qazi and TV anchor Gharidah Farooqi are making various allegations, e.g., the attack on Sayyeda Zainab’s shrine was a consequence of attack on Khalid ibn Walid’s mosque, the attack on Khalid mosque and Sayyeda Zainab’s shrine was carried out by Assad forces etc. This is typical propaganda tactic by Taliban, Al Qaeda apologists.

This camouflaged fb page of Jamaat Islami Pakistan has not a single post on attack on Sayyeda Zainab’s tomb in Syria https://www.facebook.com/mybitforchange

This “report” by @etribune @AFP http://tribune.com.pk/story/580314/army-shelling-destroys-historic-syrian-shrine-ngo/ … is based on propaganda by this “NGO” https://lubpak.com/archives/276933

Al Qaeda’s Wahhabi terrorists’ propaganda video of Khalid ibn Walid mosque they destroyed themselves. Wooden roof  is intact, grave detonated. This is not possible via aerial bombing by Assad regime.

Takfiri terrorists and their apologists should explain: Who is protecting Muawiya’s grave in Damascus if not Assad regime? They must also explain: Is it not part of Wahhabi belief (aqeedah) to level shrines and big graves to the ground? Did Wahhabi Deobandi terrorists in Pakistani not attack shrines of Data Darbar Lahore, Abdullah Shah Ghazi Karachi, Khushhal Khattak in KPK, Bari Imam in Islamabad etc? Did Wahhabi Deobandi terrorists in Syria not level the graves of Sahaba eg Hazrat Ammar ibn Yasir, Hazrat Hujr ibn Adi etc? Why were the Sipah Sahaba thugs and apologists tight-lipped when one of the earliest Sahabi Hazrat Ammar ibn Yasir’s grave was destroyed by Wahhabis in Syria in April 2013? Why don’t these thugs participate in Shias and Sunni Barelvis yearly demonstrations in Pakistan and other countries for rebuilding of graves of Sahaba and Ahle Bait destroyed by Saudi Wahhabi government?

All those who destroyed graves of Sahabis, Ahle Bait, Aulia in Syria, Saudi, Pakistan are terrorists. May Allah curse them. We demand that shrines of all Sahabas (r.a.) and Ahle Bait (a.s.) be rebuilt in Syria, Saudi Arabia and other countries.

Ibrahim Qazi of Jamaat Islami Pakistan circulated a video made by Al Nusra Front (Al Qaeda) and FSA in which Shia Muslims were blamed for destruction of Khalid bin Waleed mosque. The video and comments used abusive language against Hizbullah, Iran, Bashar Al Assad and Shia Muslims in general. 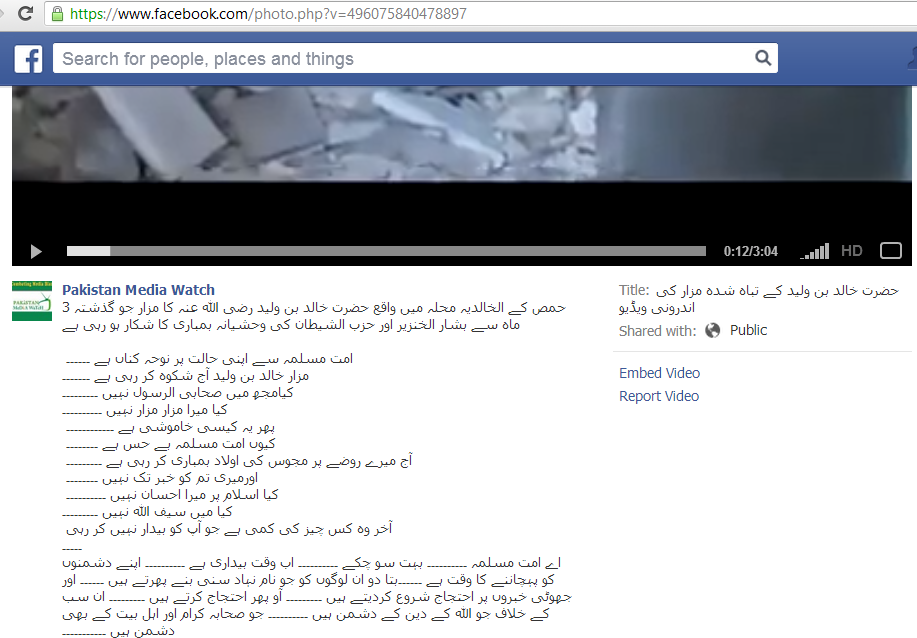 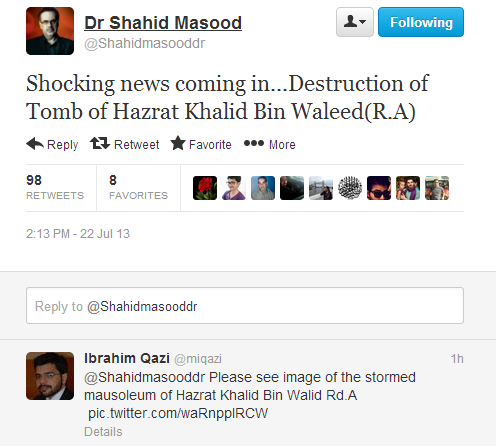 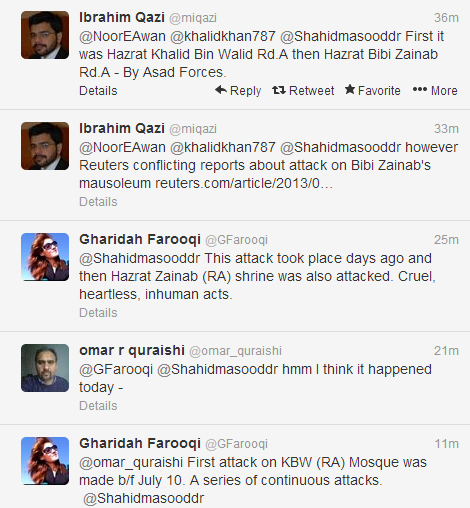 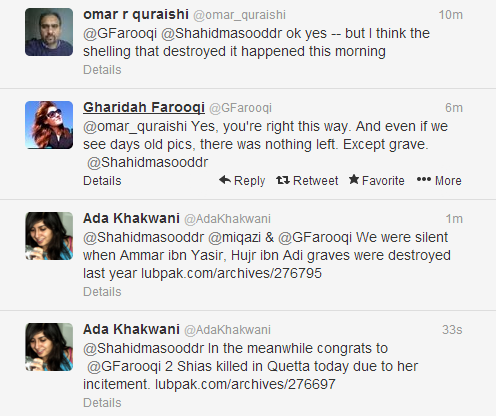 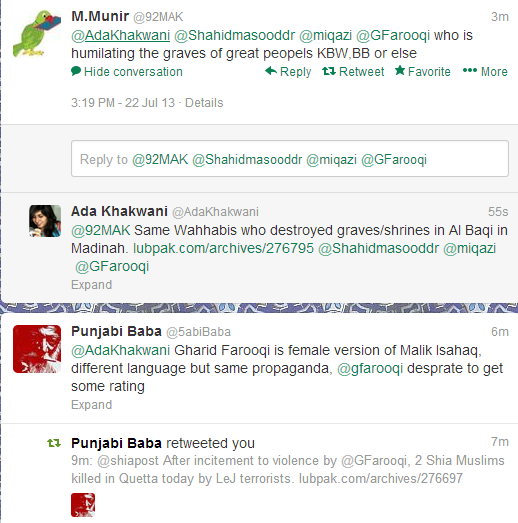 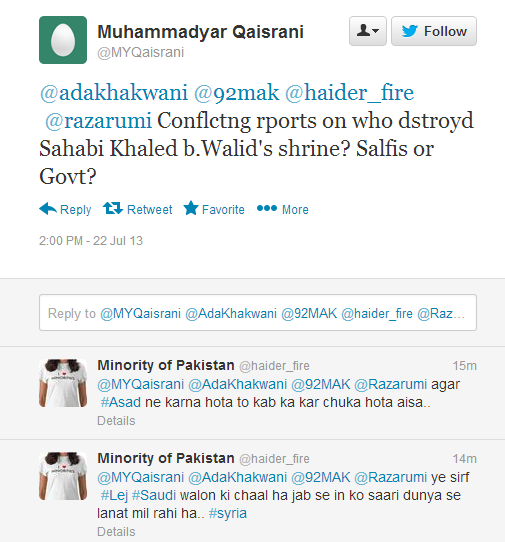 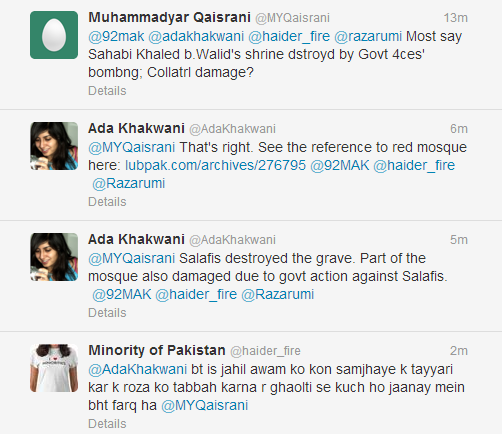 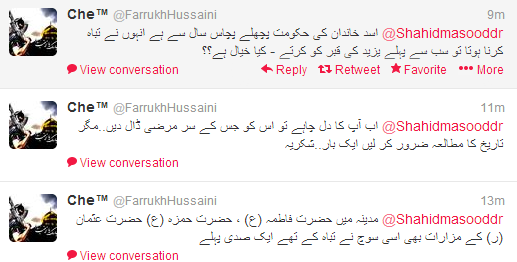 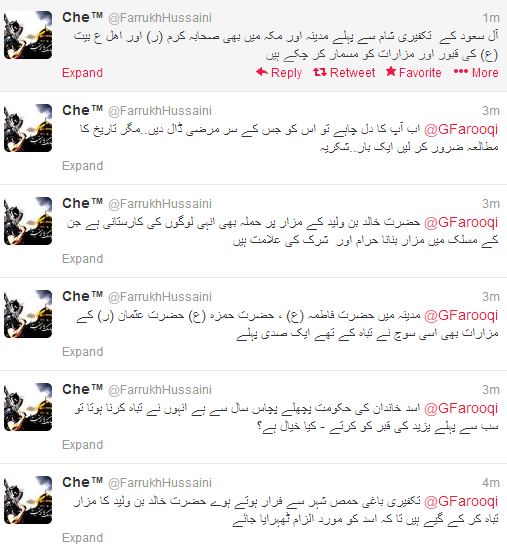 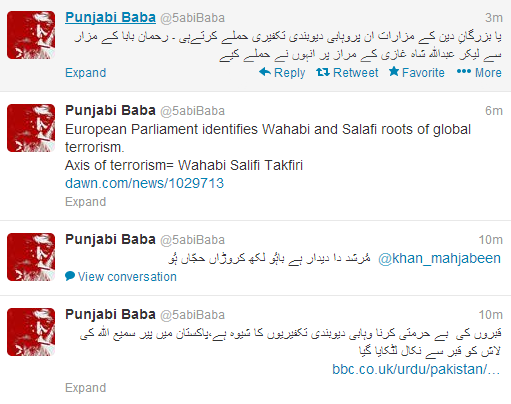 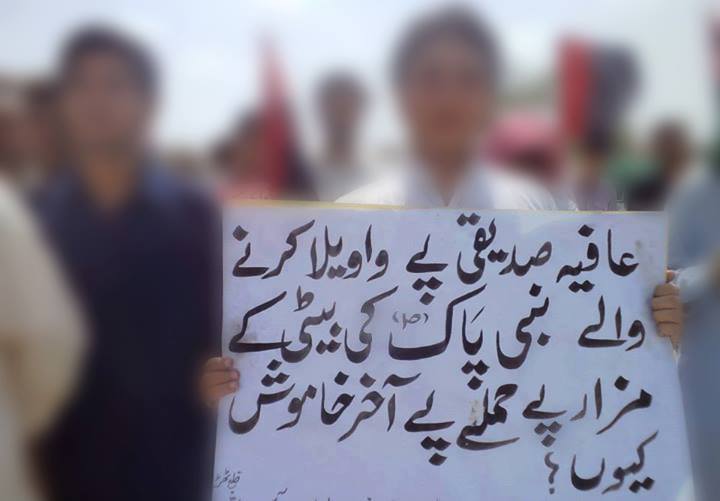