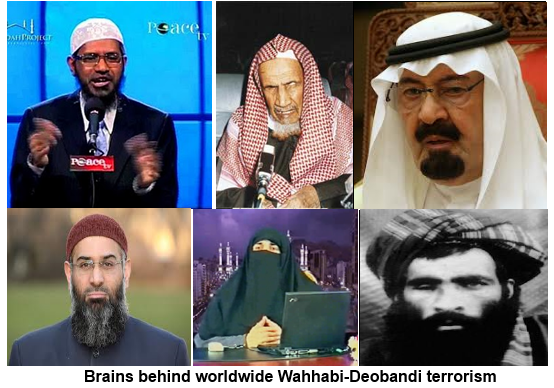 It is not merely the faith or oil that flows out of Saudi Arabia. The oil-rich Arab state and its neighbours are busy financing Wahabi and Salafi militants across the globe. [In Pakistan and Afghanistan, Wahhabi-Salafi ideology has been able to recruit Deobandi (semi-Wahhabi) militants to implement its Jihadist and sectarian agenda – LUBP].

A recent report by the European Parliament reveals how Wahabi and Salafi groups based out of the Middle East are involved in the “support and supply of arms to rebel groups around the world.” The report, released in June 2013, was commissioned by European Parliament’s Directorate General for External Policies. The report warns about the Wahabi/Salafi organisations and claims that “no country in the Muslim world is safe from their operations … as they always aim to terrorise their opponents and arouse the admiration of their supporters.”

The nexus between Arab charities promoting Wahabi and Salafi traditions and the extremist Islamic movements has emerged as one of the major threats to people and governments across the globe. From Syria, Mali, Afghanistan and Pakistan to Indonesia in the East, a network of charities is funding militancy and mayhem to coerce Muslims of diverse traditions to conform to the Salafi and Wahabi traditions. The same networks have been equally destructive as they branch out of Muslim countries and attack targets in Europe and North America.

Despite the overt threats emerging from the oil-rich Arab states, governments across the globe continue to ignore the security imperative and instead are busy exploiting the oil-, and at time times, blood-soaked riches.

The European Parliament’s report though is a rare exception to the rule where in the past the western governments have let the oil executives influence their foreign offices. From the United States to Great Britain, western states have gone to great lengths to ignore the Arab charities financing the radical groups, some of whom have even targeted the West with deadly consequences.

While the recent report by the European Parliament documents the financial details connecting the Arab charities with extremists elsewhere, it is certainly not the first exposition of its kind. A 2006 report by the US Department of State titled, International Narcotics Control Strategy Report – Money Laundering and Financial Crimes, reported that “Saudi donors and unregulated charities have been a major source of financing to extremist and terrorist groups over the past 25 years.” One of the WikiLeaks documents, a cable from the US Consulate in Lahore also stated that “financial support estimated at nearly 100 million USD annually was making its way to Deobandi and Ahl-e-Hadith clerics in the region from ‘missionary’ and ‘Islamic charitable’ organisations in Saudi Arabia and the United Arab Emirates ostensibly with the direct support of those governments.”