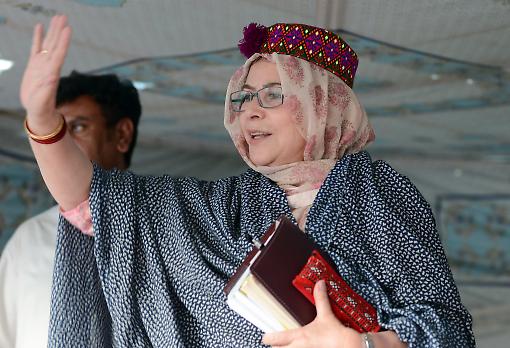 Muhammad Ahmed stands at his small kiosk on the street in a working class district of Islamabad, selling tea and making conversation with the punters. He laughs and serves up cup after cup of steaming chai, made in the traditional Pakistani style with boiled milk and cardamom. His cheerful exterior does not give it away, but just a few months ago, Ahmed fled his home in fear for his life.

“I left everything in Quetta – my house, my shop,” he says. “But you cannot put a cost on your life, or your family’s life. It is not safe for us there. Every time my son stepped out to school it was a trauma wondering if he would come home. It is not a good place for us.”

Ahmed is a member of Pakistan’s beleaguered Shia Hazara community. The Hazara are a Persian-speaking Shia minority who emigrated from Afghanistan more than 100 years ago. They have long been the target of a campaign of terror by sectarian Sunni militants. All Shias face a threat, but the Hazara are easily marked out by their distinctive central Asian features.

Around 500,000 Hazara live in Quetta, the capital of Balochistan, a lawless province in Pakistan’s south-west. They have been mercilessly targeted by violent militant groups such as Lashkar-e-Jhangvi, who continue to operate with impunity. According to the Human Rights Watch, 375 Shias died in 2012, with at least 100 of those from the Hazara community. In Quetta, as well as elsewhere in the country, individual Hazara have routinely been shot dead by gunmen on motorbikes, meaning that in certain areas, simply leaving the house is a major risk.

That death toll has already increased dramatically in 2013. On 10 January, two massive suicide bombs ripped through a snooker hall on Alamdar Road, in a predominantly Hazara area of Quetta, killing nearly 100 people. After the bombing, the community refused to bury their dead, sitting in the streets in sub-zero temperatures with the coffins until the government took action. The cabinet of the provincial assembly was dismissed and governor’s rule announced but on 16th February, another huge bomb was detonated near Hazara Town, this time killing 73.

Since then, security has been significantly tightened up in the main Hazara areas of Quetta, but this has had its own negative effects. Ahmed describes how these areas, already ghettoised, have been even more cut off. This affected business for shopkeepers, as people from other communities now avoid the area. University students also face problems getting out of the area to attend their lectures. “Fear was our constant companion, so I have brought my family to Islamabad,” says Ahmed.

He was not alone. Zaman Hussain, head of the central office of the Hazara Democratic Party (HDP) in Quetta, says that many Hazara have fled Balochistan. Many have sought refuge in Australia, America, or the United Kingdom, while others have left behind their property moved to other areas of Pakistan. There is no data to back it up, but he estimates that as many as 100,000 have left their homes.

Despite the grave threat to their lives, those Hazara who remain are refusing to be silenced. Pakistan is gearing up for a general election on Saturday 11 May, the first democratic transition in its history, and this incredibly vulnerable community is determined to take part.

Ruquiya Hashmi, 62, is Quetta’s first ever female candidate for the National Assembly. She is also Hazara. The first few times I call her mobile phone, she doesn’t answer. When we do speak, she is full of apologies: she has been wary of taking calls from unknown numbers because she has been receiving death threats for the last 10 days. “They call my phone and say, ‘don’t participate in this election’. Threatening letters have also been sent to my office, and my workers get calls too,” she says. “I am a double target because I am a woman and I am Hazara.”

She has not been given much state protection. “The government has totally failed to provide us security. They have given us one policeman and he barely knows how to use a gun, so I have my own personal security guards.”

Hashmi, a member of the Pakistan Muslim League (PML-Q), is standing for both the National Assembly and the Provincial Assembly (in which she has already held a seat for some years). Despite the very serious threats, she is undeterred. “I want to stand in this election for the people of Quetta – not just the Hazara. We want peace.”

Inevitably, the terrible law and order situation, and the high threat faced by her community in particular, has impacted on her ability to campaign. Unable to hold any campaign rallies or public meetings, Hashmi has been going door-to-door in the Hazara areas. For the last fortnight, she has been unable even to do that. “I try to go to one or two houses a day, but I cannot move around much. No-one is safe here, but I will raise my voice.”

She is not the only member of the Hazara community to defy the odds and stand in elections. Mohammed Raza, spokesperson of the HDP, says that from his party, there are five candidates standing for seven seats in the Provincial and National Assemblies. “Our party was already on the terrorists’ target list before the election period, so our movement is very restricted,” he says.

On 23 April, a suicide bomber blew up his car at a checkpoint at the entrance to a Hazara district. Six people were killed. Raza, and other HDP members who I speak to, believe that the target was their nearby campaign office. Many party members were gathered there when the bomb went off.

“We had some government security after the January bombing, but four months ago, they took it back,” says Raza. “At the start of April, the intelligence services told us not to even go to our local market because of hit men targeting our community.”
Hussain says that although security has improved since the bombings early this year, the government has stopped short of a targeted operation. “They know where the terrorists are but they are not doing anything about it,” he says.

Individual residents of Hazara areas have been receiving threatening phone calls, and there is the possibility of attacks on polling day. But Hazara politicians and community leaders are confident that people will come out to vote, despite the very real risks. “We want to raise our voices,” says Hussain.

At his kiosk in Islamabad, Ahmed, who has registered for a postal vote, is cautiously optimistic. “We Hazara are Pakistanis too and it is our right to cast our votes. Most of us have lost relatives and friends. When we protested peacefully on the streets, we had the provincial government dismissed. So who knows what we can do at the ballot box?”