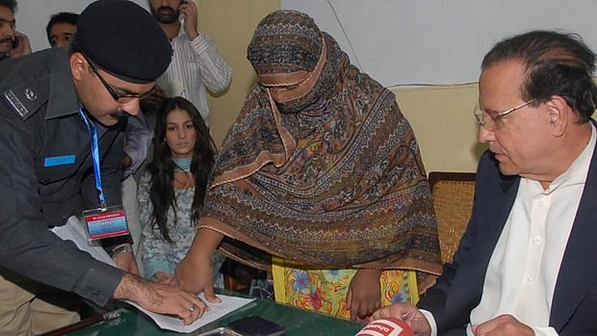 LAHORE, PAKISTAN (ANS) — Asia Bibi, the Christian woman on death row whose blasphemy conviction was decried as unjust by slain former Governor Salmaan Taseer, faces a wait of at least another two years behind bars before her appeal is likely to come up before the Lahore High Court (LHC).

According to a story by Rana Tanvee for The Express Tribune, Bibi, 45, has been jailed since June 19, 2009, when her neighbors in a village near Nankana Sahib accused her of making derogatory remarks about Mohammad.

An additional district and sessions judge convicted and sentenced her to death in Nov. 2010, pending confirmation of the decision by the LHC.

The Express Tribune reported that the case attracted the attention of then Punjab Governor Salmaan Taseer, who visited Bibi in jail and denounced her conviction as well as the blasphemy law.

A couple of months later, Taseer – and any hope Bibi had of a quick release – was killed in a hail of bullets fired by his own bodyguard.

A court staffer told The Express Tribune that for the last 10 months the LHC has prioritized the disposal of murder cases and capital sentence cases, fixing them before eight division benches. He said that there was a large backlog of such cases because of a shortage of judges.

The Express Tribune said the head of the court does have the power to hear cases out of turn. Under Article 561-A of the Code of Criminal Procedure, the chief justice of the LHC can fix any case before a bench out of turn upon an application from an aggrieved party, according to Advocate Aftab Ahmed Bajwa.

The Express Tribune reported that the LHC cause list shows that some cases from 2010, 2011 and 2012 are being heard out of turn by the court. The opposite is also true: some murder and capital sentence cases from 2005 are still pending.

Aslam Pervez Sahotra, the chairman of the Human Liberation Commission Pakistan, a group that lobbies for greater awareness of human rights, said that he had sent a request to the chief justice of Pakistan that Bibi’s appeal be heard as soon as possible, but had received no response.

The Express Tribune reported he said that Bibi faced threats from fellow inmates and her jailers at Sheikhupura Jail. She was reported to have been badly beaten by a jail staffer in Oct. 2011.

“For her safety, and because of the many lacunae in her conviction, her appeal should be heard immediately. We are hopeful she would be acquitted by the High Court,” The Express Tribune reported he said.

According to the FIR (First Information Report) of the case, registered at Saddar Nankana Sahib police station on June 19 2009, on the complaint of Qari Muhammad Salam, Asia Bibi had made blasphemous remarks after getting into an argument with Asma Bibi, her sister Mafia Bibi, and Yasmin on June 14.

The Express Tribune reported the complainant said that he had summoned the witnesses and the accused and heard their stories, after which Asia Bibi had apologized.

The Express Tribune said Nankana Sahib Additional District and Sessions Judge Muhammad Naveed Iqbal presided over her trial, hearing eight prosecution witnesses, but none in defense of Asia Bibi. On Nov. 8 2010, he sentenced her to death by hanging.