The biggest shortcoming of the PPP, analysts believe, is that there was no leader to lead its election campaign. Zardari did not allow any credible PPP leader to emerge 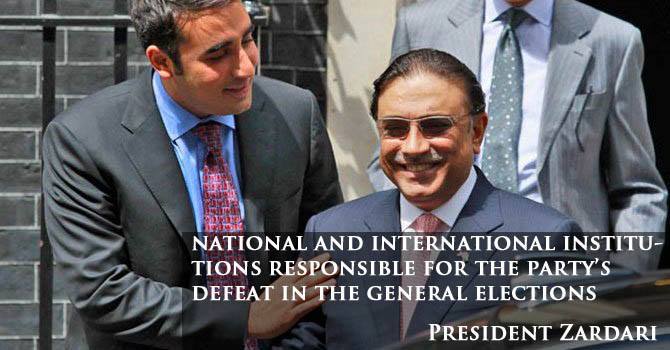 Like well-bred Pakistanis, most PPP leaders are putting up a brave face and blaming local and international conspiracies for their horrific defeat in the recent elections. They were wiped out from Khyber Pakhtunkhwa (KP), Balochistan and Punjab. The two seats they managed to win in south Punjab were thanks to Makhdoom Ahmed Mahmood, who crossed over only a few months back from the Pakistan Muslim League-Functional to PPP for the prized position of the Governor of Punjab.

The outcry about conspiracy is not without grounds. As I had stated in a column before the elections, this time the Islami Jamhoori Ittehad was made by the Taliban, who attacked the liberal parties and allowed the centre-right parties to carry out the election campaign in full blast. The PPP’s conspiracy theory is thus partially correct. But the entire blame cannot be placed on that. The PPP should take this defeat seriously and brainstorm on the real causes of the debacle. Introspection is in order.

In Sindh the PPP managed to retain more or less the 2008 position. The PPP leaders who claim that there was a major conspiracy against their party have no explanation why the ‘grand conspiracy’ did not work in Sindh. They are also shy to publicly admit that the margin of winning candidates shrank in 2013 as against the 2008 elections. Just a cursory look at the PPP National Assembly (NA) winners list shows that all those who won were big landlords except three: Ayaz Soomro, Khurshid Shah and Nauman Sheikh.

Now let’s look at the PPP elections statistics. In 2008, despite the strong sympathy wave stemming from Benazir Bhutto’s assassination, the PPP did not get a simple majority. It polled 10.66 million votes out of over 35 million total votes cast. This gave it 91 seats in the direct elections, and added with the reserved seats for women and minorities, it bagged 125 NA seats, which gave it a position to cobble a coalition government. In the 2013 elections, the PPP polled 6.91 million votes out of 46 million total votes cast. It lost 3.75 million votes compared to the 2008 polls. This slashed the PPP’s NA seats in the direct election from 91 to just 32 seats. Of the PPP’s total votes, 46 percent were polled in Sindh and 35 percent in Punjab.

Now keeping these statistics in mind, it seems that the general forecast before the elections that if the voters’ turnout would be higher, the PPP would lose its position was right. In this election, 46 million votes were cast, which were 11 million more than in the 2008 elections. The PPP strategists and many analysts, I must confess including myself, were of the view that the PTI would cut into the PML-N vote, but it seems the PTI was benefited by the higher voter turnout. The PPP failed to get a share of the increase in voters’ turnout and lost almost 35 percent of its vote bank. The PML-N and PTI were the major beneficiaries of the increase in registered votes to 86 million in 2013 from the last election’s 81 million. The loss of over three million voters should be a rude awakening for PPP strategists, if they have any. Why the debacle?

The PPP carried a heavy baggage of incumbency and was complacent. It believed till the last moment that its leader Asif Zardari would pull out some clever trick and they would sail out as winners in a triangular fight. Some even claimed that property tycoon Malik Riaz had contributed to Imran Khan hoping he would divide the PML-N votes. What the PPP ignored was that it was entering elections with the five-year record of poor governance and unbridled corruption. It had to bear the brunt of many external factors that were either inherited by it or were beyond its control.

The biggest shortcoming of the PPP, analysts believe, is that there was no leader to lead its election campaign. Zardari did not allow any credible PPP leader to emerge, relying heavily on his sister Faryal Talpur and the corrupt prime ministers he crowned. The charisma of Ms Bhutto was no more, and the sympathy vote that the party got after her assassination had dissipated. Most of the old guard are found saying, “It is no more Bhutto’s party, it is Zardari’s party.”

Much of the PPP government’s energy was consumed in the battle between the various institutions vying for supremacy over parliament. But the party could have gained more space if it had kept itself away from corruption and cronyism. All along the PPP stood on weak moral ground. True, other institutions that were destabilising its government also do not have shining records, but their image was not as stained as that of the PPP. This tussle for more power between the institutions of the state, i.e. the executive, judiciary and parliament, did not let the system that was in its infancy stabilise.

The PPP-led government inherited the dangerous geo-strategic policy set by Pakistan’s military rulers. This embroiled the country in regional disputes with devastating social, economic and political consequences. The coalition government’s attempt to build relations with India was sabotaged by the agencies and their jihadi outfits. Nawaz Sharif’s efforts were torpedoed by launching the Kargil operation. Zardari’s efforts were checkmated by the Mumbai massacre by the jihadis.

The country continued to suffer from the terrorist activities of the jihadi groups and the ruthless mismanagement of Balochistan’s nationalist movement by the agencies. This not only resulted in the killing of thousands of people, it seriously damaged Pakistan’s economic growth. The PPP government failed to take the national security policy and the Balochistan policy back from GHQ. But it was held responsible for its failure.

However, politically the PPP government claimed some big achievements. It helped the bloodless ouster of a military general by the politicians. A great leap forward was taken towards transfer of power and resources from the Centre to the provinces through the 18th Amendment and the NFC Award, something we could not do for 64 years. Arbitrary presidential powers to oust an elected government and dissolve the Assemblies were taken away. Press freedom, which some people use to show their disappointment with democracy, is an integral part of the same democracy. Parliament, whose basic function is to legislate, passed 134 laws and most of them with the consensus of the opposition. More women rights bills were passed during the PPP’s tenure than ever before. This was not a small feat, but the voters were not impressed. The PPP leadership failed to explain the benefits of these measures to them.

On the governance side the government proved inefficient. Major failures for which the PPP-led coalition government is criticised are: corruption, the energy crisis, increased unemployment, high inflation, low tax revenue collection, the public sector’s haemorrhaging impact on the economy, depreciation of the rupee against the dollar by 58 percent in five years, falling foreign direct investment, and low GDP growth. Painful prolonged load shedding of electricity and gas was at the top of most voters’ minds, particularly in Punjab. The PPP ministers failed miserably to resolve this problem, for which the voter punished them.

Low investment due to an unstable and insecure environment resulted in high unemployment and double digit inflation, which affected the PPP vote bank, as it had always claimed to be the party of the poor. Its leadership was banking on the BISP programme, which according to them helped 70 million poor families. They were expecting the recipients to vote for the PPP, but they did not.

The PPP leaders forget that many of its voters are disenchanted with the Zardari-style party management, and thus they did not come out to vote. The party was without a leader with mass appeal to motivate its voters. Their election strategy did not factor in the increase in voters and their age profile. Above all, the Bhutto-led PPP in 1970 had rallied the middle and lower middle classes in Punjab and the rural poor. Now the PML-N has the support of the small, medium and big businesses of Punjab, which continues to grow at a much faster pace than the national average. They changed the elections paradigm for an unorganised and leaderless PPP.

The writer can be reached at ayazbabar@gmail.com