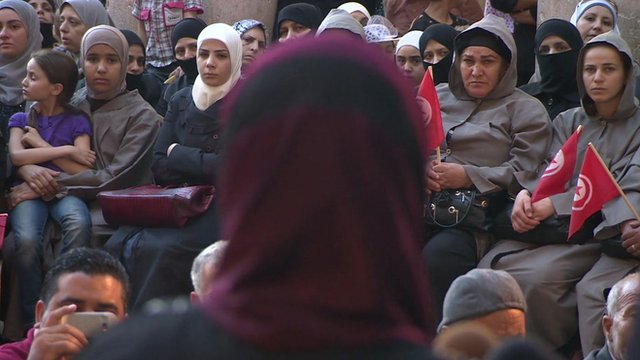 The presence of foreign fighters is causing real anxiety not only in Syria, but across the region and Europe, as Lyse Doucet reports for Newsnight

In the magnificent Ummayad mosque of Damascus, flags of two nations on different sides of a brutal war came together, in the hands of tearful mothers.

“I want to apologise to Syrian mothers,” wailed Latifa from Tunisia. “I didn’t know my son was coming here. We want to tell you our sons were brainwashed.”

Next to them sat Tunisian mothers, and fathers, in search of sons who travelled to Syria to join rebel forces, and ended up in prison.

In the mosque, under the glare of cameras, private grief was made public, and political.

About 20 Tunisian parents travelled to Damascus on a trip initiated by Tunisian civil society activists; and taken up by Syrians who see an opportunity to try to get a growing number of foreign jihadists off the battlefield.

“More than 42 countries are now sending fighters to cause bloodshed in Syria,” declared Syrian-American industrialist Khaled Mahjoub, who is on a mission to take on Islamists he calls “Salafi Wahabis powered by petrodollars”. 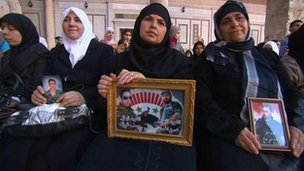 As G8 leaders meet in Northern Ireland, a Syrian with close ties to President Assad’s family wants to capitalise on growing anxiety in Europe over what are believed to be hundreds of European jihadists now fighting in Syria.

“Europe today is having a new Pakistan on its border,” he warned in an interview in Damascus. “The real problem is the transit through Turkey and the incubation of all those foreign fighters coming from Europe who will be going back to Europe.”

That warning was echoed by a delegation of European Union politicians, mainly from far right parties, who also came to Damascus last week at the invitation of the Syrian government.

“If they come back to our country they will fight jihad not in Syria anymore but on European soil,” Belgian Senator Filip Dewinter told me when we met outside a police station targeted by a double suicide bombing only hours after they arrived.

“This is a very, very big threat for all European countries, not just for Belgium.”

Jihadists from European countries – everywhere from Britain to Sweden – can be seen in videos uploaded to the internet, along with fighters from areas long seen as breeding grounds for militancy, including the tribal areas of Pakistan and Chechnya. 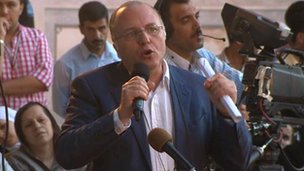 Mr Mahjoub’s dream of establishing a “transparent fast-track mechanism” to get fighters out of prisons and off the front lines is making slow progress with Tunisia which, like many Western and Arab countries, has cut diplomatic ties with Damascus.

Even this first test-case ran up against competing agendas.

For Tunisian lawyers, the main focus is due process for prisoners.

“We want to ensure a fair trial including the presence of defence lawyers,” explained Messaoud Romdhani, a Tunisian human rights activist.

Tunisians who played a role in their country’s peaceful uprising against an authoritarian ruler are wary of battle-hardened Islamists returning home. They accuse their own Islamist-led government of turning a blind eye to recruitment.

As lawyers from both sides met in a Damascus hotel to hammer out details of a joint communique, the Tunisians also argued for mention of the rights of all people to fight peacefully for democracy and human rights in an effort to distance themselves from a punishing war being waged by Syrian forces.

Syria’s Deputy Foreign Minister Faisal Mekdad issued a statement saying Syria was ready to speed up the extradition of Tunisian prisoners “who entered Syria illegally and have not killed anyone”.

But there are conditions attached. Not only must foreign fighters be put on trial but legal action has to be taken against all those responsible for their recruitment.

Heartfelt apologies from Tunisian mothers appeared to come naturally but reports from the prison visits say many of their young sons refused to renounce their mission to fight Jihad on Syrian soil. 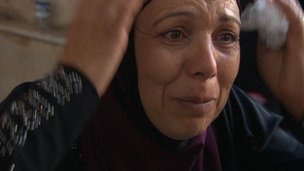 “I know my son. He wouldn’t kill anyone,” says Tunisian mother Latifa in Damascus

And this offer to the West to make common cause falls on deaf ears in most capitals.

“We are concerned about foreign fighters,” said one Western diplomat in the region. “But what about all the foreigners the Syrian government has enlisted?”

That has not daunted the zeal of Mr Mahjoub whose own factory to build environmentally-friendly housing was destroyed by rebel fighters.

Using what he calls a moderate Sufi message, he calls for “the CO2 of hate to be replaced by the oxygen of love”.

At this week’s G8 meeting, leaders will speak a language of trying to find peace in Syria. But those pleas are eclipsed by their own war of words over a growing arms race in Syria.

Countries like Britain and France are widely expected to follow the United States in providing military assistance to what they call moderate opposition forces.

Russia is emphasising it will continue to honour its own defence contracts with Damascus, which include far more powerful weaponry.

In the Syrian capital, Tunisian mother Latifa pleads the innocence of her son Sami. “I know my son,” she cried. “He wouldn’t kill anyone.”

But as the toll in Syria climbs ever closer to 100,000 dead, this is a war that more and more fighters, from far and wide, are calling their own.