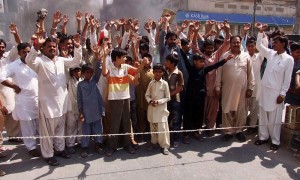 FAISALABAD: A large number of people from villages around Khurrianwala town vented their anger against power outages on Tuesday and attacked a grid station and offices of the Faisalabad Electric Supply Company (Fesco). They blocked traffic on the Sheikhupura-Faisalabad road for about 10 hours and pelted police and vehicles with stones, causing injuries to four constables.

Police chased the protesters, entered a number of houses by scaling the walls or breaking open the gates and thrashed anyone they found there.

Policemen are reported to have abused and dragged women when they objected to their conduct.

A number of women and children who had not joined the protests were also mistreated.

More than 10 people were arrested from the houses.

The industrial city of Faisalabad saw a number of violent protests over outages during the PPP government. At that time, Punjab Chief Minister Shahbaz Sharif had backed their protests, but asked them not to damage public property. PML-N chief Nawaz Sharif had also supported the agitation by industrial workers.

Protests were also reported on Tuesday from Dera Ghazi Khan, Sheikhupura and Bahawalpur, but they were largely peaceful.

Hundreds of people started gathering in the morning and blocked the Khurrianwala Road. They raised slogans against Fesco and an independent power producer supplying electricity to their villages.

The protesters attacked the Fesco sub-divisional office in Bundala, ransacked the building and put it on fire. Police did not intervene because of having been outnumbered by the protesters.

They also attacked a grid station near Ada Johal and tried to enter it, but were stopped by police.

A mill where police had been deployed also came under attack.

Two ambulances remained stuck in the traffic for some time but were later allowed by agitators to proceed. Police used batons and teargas to disperse the protesters but they refused to leave till restoration of power supply.

Police chased the protesters in streets and bazaar and also entered some houses to arrest them.

The protesters also hurled stones at Faisalabad DCO Najam Shah and CPO Raja Riffat Mukhtar when they tried to negotiate with them.

They said both the officers were unable to resolve the issue, adding that the district coordination officer had assured their delegation a couple of days ago that the problem would be solved, but nothing had been done so far.

Similar protests had been held on June 3 when demonstrators blocked the Khurrianwala Road for over five hours, damaged some vehicles and pelted police and some buildings with stones. They raised slogans against 10 hours of loadshedding schedule planned by Fesco.

Police fired into the air to disperse the protesters and pursued them to the Ada Johal area. The road was later cleared.