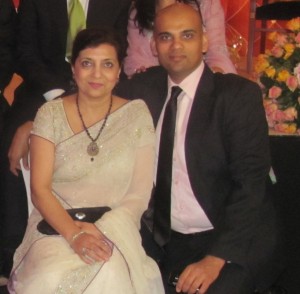 Brief introduction: Ali Wahab is a UAE based investment banker and contributes regularly for the business pages of Express Tribune. His mother (late) Fauzia Wahab served as the Information Secretary of the  Pakistan Peoples Party in possibly the most testing period of March 2009 and February 2011 as well as a two term MNA between 2002 and 2012. His father (late) Wahab Siddiqui was one of the earliest TV anchors of political programs and a student leader of Karachi University. Ali Wahab has actively supported the PPP through political circles in Karachi and UAE.

LUBP: What is your association with the PPP? Brief history or/and views please?

Ali Wahab (AW): My association with the PPP dates back to 1994 when my mother was appointed as a councilor of KMC by the PPP. Have been a steadfast supporter even though belonging to Karachi, where the PPP has limited support base especially amongst the Urdu speaking community. The pull towards the PPP was because of my parents association from the university days and of course the charismatic Benazir Bhutto. Despite of whatever has happened, and the “winds of change” the stamp on the ballot went to the “Arrow” (PPP’s election symbol).

AW: PPP is the only party that is present in all corners of the country meaning a federal outlook and also having been against the Zia influenced right wing, it is always under attack for its secular promoting point of view. The fact that it was led for nearly 3 decades by two women, it is also hated for the support it has given to the rights of women. In this election, the choice was very simple: Pro Taliban versus the Anti Taliban. Anti Taliban were the PPP, MQM and ANP whereas the Pro-Taliban or the Taliban apologists i.e. the PML-N and PTI were chanting the winds of change. For me the PPP, will always remain the first political love than anyone.

AW: Having been in the thick of the PPP second and third tier leadership for nearly two decades, I would not agree to this statement. The “Peoples” in the PPP causes for a strong connect with the party workers and thereon the masses. Disconnect is not appropriate rather failure to act on the public demands has led to a failure. Example: power failures were a major point for the five years, the inability to sort the matter out remained ingrained in the masses minds. The disconnect can be partly substantiated as current leadership of the party that came to the fore because of the untimely assassination of MBB. The Party also lacked strong defenders in the last two years for which I can cite passing away of people like Salmaan Taseer, my mother Fauzia Wahab, Azeem Daultana etc. Similarly it’s been an inherent problem of the PPP that when in power it tries to cajole the anti-forces hoping to bring them to your side. They only come for the perks and privileges and then leave when the party is over. On the other hand, a jiyala remains a jiyala. He gets disheartened and that shows in the electoral results.

AW: I feel that matters like foreign policy have nothing to do with these think tanks rather comes from tanks who don’t think. In September 2008, after assuming the Presidency, the president talked about a visa free regime between India and Pakistan and a very good relationship based on economic interests and cultural ties. We know what happened on November 26 2008! Similarly, it sickened me how the discovery of OBL in Pakistan, the PPP continued its dovish stance which eventually turned its head against it in the form of Memogate and re-birth of Imran Khan in a lota based Tsunami.

AW: Where the PPP has failed is not having its base in the student politics as well as local bodies. If one looks at the current leadership, its one which came from the student politics days of 1970s and early 1980s. Post that its only betas, betis, bahus and biwis who are coming into politics. It was a sad scene for me to visit the election office of PPP’s candidate in NA-250 on the eve of May 11 elections: all those from the party whom I saw 18 years ago were still there with no new blood!

AW: Perception is reality and it is an unfortunate reality that the PPP failed to create a good perception. Media was the conduit of communication and its bias in favor of the right wing led by PTI and PML-N backed by Judiciary just didn’t allow for the point of view and achievements to be brought out in public.

AW: When you won’t take on the state within the state effectively, this is what will happen. What the Shias, Christians, Hindus and Ahmadis got to realize that you may punish the PPP for their inaction, what will happen now is anyone’s guess!

AW: Whatever the PPP achieved, it didn’t show as much as the perception of Pakistan in the doldrums. It also requires for deep analysis of what has happened: WAPDA, based in Punjab; OGRA favoring Punjab; most of the IPPs based out of Punjab; Punjab run by the right wing Sharifs, it was a recipe for disaster!

AW: Whoever may have been the caretaker CM, the result would have been in favor of the Sharifs. The results are manipulated through education department and civil services who representatives are the returning and presiding officers. The Sharifs have been in power in Punjab for 28 years. The result shows.

AW: In hindsight, it has damaged the PPP a lot. Though it was a change of way of governance depicting maturity, it hasn’t worked. On the other hand, PML-N, which remained the biggest beneficiary of being part of the set up and controlling Punjab, cemented its fake credentials of being inqilabis. We saw blatant display of this hypocrisy by Shahbaz Sharif who kept singing “Jamhooriat” being a billionaire!