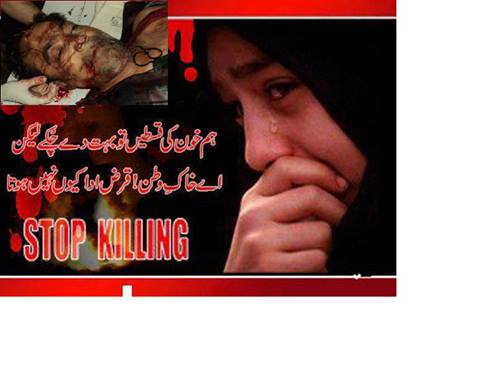 During, and more so, just after the countrywide four-day sit-in in January against Shia Genocide, my friends had questioned and commented on certain aspects of the event. I had promised my daughter (one of the persons who asked some pertinent questions) that I will try to collect and write down my scattered thoughts.

Then, on January 16, the martyrdom of Shabbu (as my cousin Hasan ibne Husain was lovingly called by all in the family) who was shot from the back in the jugular vein outside his gate when leaving for his office with his 12-year old daughter whom he was to drop off at her school. All those thousands of martyrdoms of my brethren in faith were very tragic for me and I have attempted to do my humble best to help alleviate the sufferings of those they left behind, but none had hit me as personally as this one. The faces of his mother, sisters, brothers, wife and kids flashed before me, making me think what they would be going through right now.

And then …. anger at the animals who did this ….. a wish to somehow avenge what had happened …. feeling of helplessness at not being able to do it, not knowing who to avenge it from ….

As I tried to clear my confused thoughts and get rid of my anger, many answers to questions of past few days became evident to me, though about others I was already quite clear.

I now put before you what I think. Do correct me or improve upon what I have submitted, wherever necessary.

These were the questions/suggestions that had been put to me:

*Both episodes of the Quetta carnage were major tragedies for Pakistani Shias, but not the largest – statistically that still remains the Thehri massacre of June 1963, when 118 Shia Muslims were butchered in Khairpur in an attack on the Ashura procession. And there have been at least two episodes in Quetta itself statistically almost matching the 2013 ones in number of casualties. This is besides attacks by lashkars in Gilgit in 1988 and on many occasions in Parachinar when hundreds were martyred. Why then the reaction to this one was dissimilar to any tragic episode before this?

*Considering the momentum that was gathered countrywide, was it not inappropriate to discontinue the countrywide sit-in? Wasn’t the discontinuation possibly a sellout, and, if so, by whom?

*What was our major achievement from the sit-in?

*Was it a joint Shia/Sunni protest or a purely Shia thing?

*After Shabbu’s martyrdom in January and now Dr. Haider and his young kid Murtaza in my own city, I was told by some friends and relatives that I should be more careful about myself, given that I am active in azadari and also in Shia politics.

*When will this (Shia Genocide) end?

* Why don’t we retaliate? Wouldn’t that bring about an end to Shia Genocide?

The unprecedented nationwide reaction to Quetta was a result, yes, of the martyrs’ blood and the absolute resolve of their relatives who silently sat out the below freezing point Quetta nights till their major demands were met, but more so a nationwide reaction to apathy by all branches of the government – de jure as well as de facto, as also a generally prevalent feeling of ‘enough is enough’. That is what brought the whole country – Shia, Sunni and non-Muslim – on one united platform. The vigils at Liberty Roundabout in Lahore and the now famous sit-in outside Bilawal House in Karachi were initiated not by any Shia organization, but by the civil society. Many of those participating in the sit-ins were persons who had never before taken part in a protest of any kind. For them it was a much needed catharsis that made them a part of this effort.

I was among the organizers of the sit-ins outside Governor House, Lahore. Unlike the norm at public events, no protestors were bussed-in or had to be ‘invited’. From the burger crowd of DHA to a motorcyclist to a bus commuter, people came on their own after hearing of the protest. In fact, quite a few asked me on the day after the carnage if any protest was taking place in the city. Having a crowd of thousands under the open sky was nothing short of a miracle. Another phenomenon that contributed to this was that those leading the protests were also sitting on the same roads and pavements as the rest of us, and they acted not as ‘leaders’ as such but servants of the nation.

As I said, some of the protests were organized by the civil society, and while all protests had support of the whole nation except extremists and their sympathizers, the January sit-ins were, by and large, a Shia phenomenon, except for token presence by political activists and visits by their leadership – the major exception being JUI, the ‘ideological’ parent of ASS/LeJ. This is an area in much need of attention, whereby scope of the protests needs to be widened, so that non-Shia Pakistanis join these protests in larger numbers. The February sit-in depicted increased participation by non-Shias, alhamdolillah! Suggestions are welcome as to how to further improve this.

Having said that, as one who has seen the pre-9/11 atmosphere when even many educated persons saw the Taliban as heroes, I feel that we have come a long way in the right direction, where not only no fingers were raised on the sit-ins despite the obvious discomfort they caused to daily civic lives, but general public opinion was very sympathetic to the peaceful exercise of this right. Initially the media covered the protests very cursorily, but later the level of coverage became reasonable. There were some outlets though which, based on their own agenda, were spreading disinformation.

Another aspect of the sit-ins was that while the protests in major cities and towns were visible to us, these were taking place even in small towns and villages throughout the country, but were so disciplined and peaceful that when in January the leadership asked the protestors to give way to the Qadri march, it was facilitated without any hitch. People voluntarily brought food for the participants, and the organizers or the protestors did not have to worry about this aspect. At Lahore, I was witness to the cleaning arrangements on Upper Mall outside Governor House which were so good that when the municipal crews came after the sit-in, they remarked that their job had already been done. And then, of course, the fact there was no destruction of public or private property, not even the abhorrent flexes with photographs of Zardari, Nawaz and Shahbaz.

The conclusion of the dharna was not a sellout. These are the first battles in a very long war – battles that were conclusively won by the unarmed peaceful protestors. The objective was a show of force strong enough to jolt the authorities into action. The objective was not to lead the country to total collapse. Through a countrywide blockade of roads the objective was achieved, and for the first time in the country’s history a provincial government was fired as a result of a peaceful protest. Sadly though, in January, the Chief Justice of Pakistan, who takes suo moto notice of much lesser happenings (whiskey bottles and a slap) failed to notice this bloodiest tragedy during his custodianship in his own home city. It took a repeat performance by LeJ for His Lordship to wake up and ‘notice’ the mayhem.

From a pre-9/11 situation when Pakistani Shias were ostracized and terrorist Taliban were heroes, to the participation of Sunni Muslims and Christians – ordinary people, not just representatives of political parties – we have come a long way. Having said that, the attendance was still overwhelmingly Shia, but then, for us this is a life and death issue. Isn’t it?

Migration is not a practical option for fifty million Pakistani Shias. Yes, a few like me can leave for what they consider safer shores, but that will mean leaving the ‘have-nots’ at the mercy of these animals, as happened in Iraq during Saddam’s rule. We made Pakistan. We will live – and die – here to save it.

Shia Genocide is not targeted at our physical annihilation. Even if an average of 10 (higher than the present figure) Shias are martyred daily, it will take 300 years to kill just a million. And we are already 15 to 20 million in Pakistan. Shia genocide has existed for over 1400 years and it is actually targeted at eliminating Tashayyu (Shiaism) through terrorizing Shia Muslims. The choice is clear. Do we want to keep living as zombies at the cost of death of Tashayyu OR do we agree to save Tashayyu even at the cost of our lives?

With this in view, we should be ready for Shia Genocide to continue till the appearance of the Mahdi (atf), crests and troughs in the interregnum notwithstanding. That, however, does not mean that we should not be actively combating it.

How to go about it? The first major step – these peaceful sit-ins that have united us as nothing else could – have gone a long way in displaying our latent force and awakened non-Shia conscience towards this cause. The fact that one call of our leadership can jam the country, and another call can instantly un-jam it has been amply demonstrated. More importantly, it was also demonstrated that for us the country is more important than even hundreds of our lives. The dharnas could have been carried on indefinitely – even after burials had taken place, but two factors made us refrain from this: possibility of serious negative effects on the country’s economy AND to preclude possibility of hijacking of this protest by nefarious elements. In February, some sit-ins in Karachi were attacked by goons of a linguistic outfit known for its terror tactics – an outfit that sees Shia platforms like MWM intruding into its “territory”, i.e. the Urdu-speaking Shia block vote in Karachi and Hyderabad. It was a sagacious decision by the leadership to end the sit-ins when they did, even at the cost of slurs on them by the runaway chief of the terror-friendly linguistic outfit.

Another major step is to keep real azadari alive. By ‘real’ azadari I refer to remembrance of Imam Husain (a.s) with objectives similar to his stated objectives. And real azadari is a ‘public’ protest by its very nature – not within four walls, as demanded by our killers, and now seconded by some unwitting ‘friends’.
Retaliating terror with terror should not take place. That will make us loose the moral high ground that we now hold. However, not resorting to terror does not mean that we should forego proactively defending ourselves, especially when the state – all three organs of it, the legislature, the judiciary and the executive – has clearly failed to do its duty. A bitter reality, however, is that when pushed to the wall, the instinctive reaction is to attack your attacker. So, while there is active discouragement for such action from Shia religious leadership, some individual desperate youth may indeed resort to militancy targeted at our killers if no solace is forthcoming from those responsible for providing it. Let us pray – and act – to stop this from becoming inevitable.

In the end, let me make it clear that while I am a worker of Majlis-e-Wahdat-e-Muslimeen (MWM), the views expressed here are entirely my own.